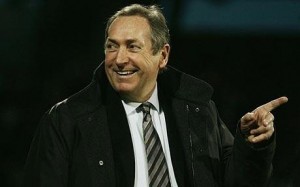 The month long wait for Martin O’Neill’s replacement as Aston Villa manager has ended with the appointment of Gerard Houllier to the role on a two year contract.

The former Liverpool boss, who won the Uefa Cup as well as the domestic FA and League cups in his time at Anfield, had been working as the technical director of the French Football Federation (FFF).

“I am very happy and proud to join this historic and great club,” he told the club’s official website.

“It was a very difficult decision for me to leave the FFF but I could not turn down the opportunity to manage a club whose approach, both on and off the pitch, I have long admired.

“Aston Villa is one of England’s biggest clubs and has an amazing set of fans. This is a tremendous challenge and one I am very much looking forward to taking on.”

Houllier brings a wealth of Premier League experience with him to Villa having had six years with Liverpool and it is believed that he saw off Sven Goran Eriksson, Alan Curbishley and caretaker boss Kevin McDonald to land the role.

Villa have had a mixed start to the season, including a humiliating 6-0 defeat at the hands of newly promoted Newcastle United, though they did beat Everton 1-0 in their last outting.

2 thoughts on “New era for Villa as Houllier takes over”