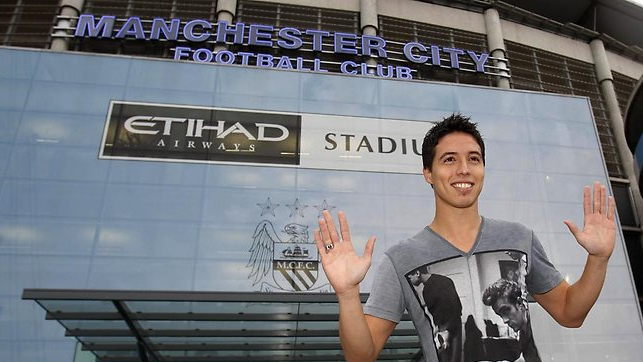 In one of the longest running transfer deals of the summer the French international – out of contract next summer – signed on the dotted line for Roberto Mancini around the very same time his old team were playing Udinese in the Champions League Qualifier with manager Arsene Wenger’s future firmly in the balance.

The creative midfielder took pains to thank Wenger for turning him into the player he is today but also stressed that he was disappointed the deal could not have been completed earlier. Nasri also took a swipe at Arsenal’s fans, many of which who booed the star in the defeat to Liverpool last weekend, by saying that one of the main reasons he was joining City was because of their higher passion for the game.

Speaking to Manchester City TV, Nasri was quite blunt and unusually honest for a footballer when it came to answering the saccharin coated questions and more often than not he gave answers that were quite unexpected.

It is a big relief [to join City] because there were long, long negotiations between the two clubs.

He said in relation to the length of the drawn out negotiations. At one stage Roberto Mancini even had to warn Wenger not to cup tie Nasri by playing him in the crunch Champions League 2nd Leg against Udinese.

His relief at leaving the stagnation at Arsenal was obvious. In recent seasons the Gunners has gone backwards every season while Manchester City sit on the cusp of domestic and possible European domination for years to come.

Now I am finally a City player and that’s all I wanted since the start. It is a big day for me. It is a new start.

I was a little bit frustrated because I said to the manager I wanted to leave.

I stayed for the whole pre-season…

Nasri is obviously delighted that the deal went through but it is also obvious that the attack minded midfielder was also frustrated by the length of the negotiations.

Initially Arsene Wenger backed himself into a corner by stating Nasri would not leave for any price and that he would prefer to lose the player on a free transfer at the end of the season. However, wisdom eventually took hold and now the Frenchman has £25 million in his back pocket where 12 more months would have seen him empty handed.

The big question, with Wenger, as always is whether he will spend the more, or not.

Nasri then perhaps veered off course for the first and took something of a swipe at Wenger and his old team’s transfer philosophy.

I wanted to do the pre-season with Manchester to know my team-mates.”

When you arrive at the club you want to play with big players [like Aguero, Tevez and Silva].

I love this kind of player. They have quick feet, good technique and like to play. You are looking to have a connection with them.

The obvious point being made here is that Nasri now sees Arsenal as a selling club and as a team who have lost their best players or in other words the very type of players Nasri likes to play with. The potential loss of Cesc Fabregas obviously played a huge part in Nasri’s decision to move away from the Emirates.

Seeing your best players sold is difficult to accept for any professional footballer especially when they have formed an almost telepathic bond as Wenger’s teams seem to do.

The Frenchman’s transfer philosophy seems to take precedence over his footballing philosophy and it has become common place to see good young players come in, see their game progress, and then be sold at a profit while the team steps backwards.

Later on Twitter Nasri went to pains to row back on his earlier comments and praised his old club:

I want [to] thank Arsenal FC for everything this club has done for me. I will always be grateful and I wish all the best to the club.

And thank you Mr Wenger and all the staff you were amazing with me and I become the player I am today because of you.

However, while the comments are compliments, they do come across as somewhat backhanded and refer to Arsenal’s transfer philosophy of selling developed players rather than holding onto them.

Nasri’s final parting blow was made at the expense of the atmosphere in the dressing room and in the stands of the Emirates.

I’m happy to be there in this dressing room.

I can see they are really passionate and it reminds me a little bit of Marseille.

Nasri joined Marseille as a nine-year-old and over the following eight seasons he became a player of some promise. From making his debut in 2004 at 17, Nasri saw how Marseille’s unique togetherness was developed in the face of European expulsion. It helped create a binding atmosphere and one where players would literally run themselves into the ground for their team mates.

The same cannot be said of Arsenal in recent years.

He also chose to voice his displeasure at Arsenal’s fans. This, perhaps, is understandable given his treatment by the Gunners faithful in their Premier League defeat to Liverpool.

Arsenal have good fans but not that passionate since they moved from Highbury to the Emirates (Stadium).

I remember when we played against City, when we lost 3-0, the crowd was amazing.

That is what I want.

When you play football it is for a good atmosphere.

There can be little doubt that Arsene Wenger and Arsenal have made a grave error by allowing such an important player to enter the final year year of his contract without a good offer on the table. However, they must also be complimented on taking in £25 million when he could have left for free next season.

Nasri, it must be said, has played an absolute blinder in this situation. He has read Arsenal’s transfer and financial situation perfectly and has left a team that many feel will not challenge for a title for many years to come. He has seen the direction of the wind and has chosen to leave Arsenal for Manchester City at a perfect time.

There can be little doubt that City are in the middle of becoming one of the dominating forces in world football never mind England and that sooner rather than later Sir Alex Ferguson will regret calling them his “noisy neighbours.”