The former Manchester United and Aston Villa coach Ron Atkinson had a term for when a player put in a particularly vigorous tackle early in the match – “early doors” as he put it – in order to let his opponent know what awaited him for the remainder of the game: A reducer.

Roy Keane was a master of the art this side of the Irish sea, while Graham Kavanagh executed one particularly memorable example on Gilberto Silva in a friendly with Brazil at Lansdowne Road, but the undisputed king of the reducer in the late 80s was Wimbledon’s own Vinnie Jones. 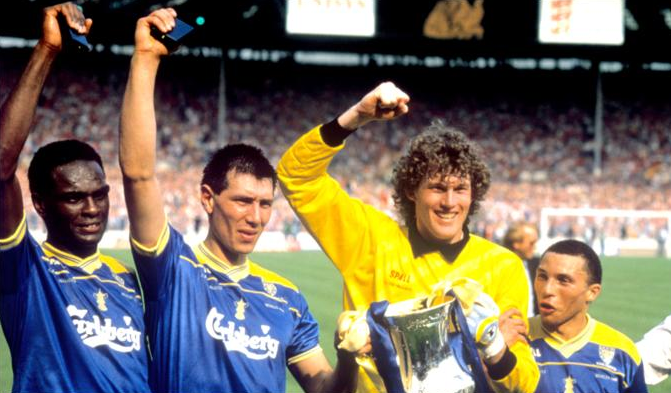 The past few days have seen a clip circulate on social media of Jones putting in one such nasty challenge on Liverpool’s Steve McMahon early doors in the London’s side’s historic FA Cup final clash with the then-aristocrats of English football, Liverpool in 1988.

The reason is the broadcast, the day after Christmas, of BT Sport’s The Crazy Gang documentary, which documented the rise and fall of English football’s most notorious group of misfits, whom Dave “Harry” Bassett guided from non-league football to the top tier of English football before Bobby Gould steered them to cup glory.

The broadcast of the Crazy Gang was conveniently timed to coincide with the first meeting of Liverpool and the reformed AFC Wimbledon (the original club having been moved to Milton Keynes a decade ago) in the FA Cup on Monday night, in which Liverpool overcame their fourth-tier opponents by the odd goal in three.

The clip of Jones has variously been held up as an example of the softness of modern footballers (McMahon jumped straight to his feet and continued following the clash, though not before splitting Jones’ face open with an elbow) and a reminder of how far English football has come since the days of caveman football was less the exception than the norm.

Fans could have been forgiven for wondering whether anything had changed when, within a minute of Monday night’s kick-off, Wimbledon winger Sean Rigg had put in the modern equivalent of a reducer on Liverpool’s Spanish full-back Javier Manquillo, who took rather longer to get to his feet after the over-vigorous challenge.

There were other similarities as well, as Liverpool arrived with a reputation (albeit somewhat self-professed) for playing attractive football, while their less-talented opponents were more direct and relied on the strength of their muscular frontman. For 1988’s former boxer John Fashanu, see 2015’s part-time bodybuilder Adebayo Akinfenwa.

That’s where the similarities end. Whereas Wimbledon’s team of 1988 was based – not unlike Jack Charlton’s Ireland side at that year’s European Championships – on a strategy whereby the individual brilliance of some was sacrificed for collective solidity, the 2015 edition played with a daring and ambition that belied their lowly position, and they outplayed their opponents at their own game for large spells.

Returning to that opening scene at Wembley, that war-like, hardman image is one that that Jones, and his partner in crime John Fashanu, are all-too-willing to play up to during the 80-minute documentary.

Jones, a working class boy from a broken home who had to fight for everything in his life, and Fashanu, the abandoned son of Nigerian parentage who grew up with middle class white foster parents, embodied the sort of outsider mentality Bassett harnessed at Plough Lane.

Today, they make for a comical pair: Jones, dressed in a loud pink shirt and a tweed hunting suit, like a country squire fresh from a day shooting game; and Fash, with the sort of well-to-do accent that would make Chris Eubank blush. It’s difficult to imagine either scaring a kitten, let alone a grown man, but they were borderline-psychotic individuals on the football field.

Much is made of Jones effectively finishing Gary Stevens’ career with a thuggish sliding tackle in 1988, while Fashanu made a mess of Spurs captain Gary Mabbutt’s mush with a deliberate elbow five years later, yet there’s an element of pageantry to the way these middle-aged men discuss their youthful escapades.

Early on, Jones asks, with a straight face:

If you’re in the trenches and you look around, and there’s a guy there with a rifle aimed at your head with his finger on the trigger – what are you going to do?

We were getting to the stage where we considered ourselves warlords. Because every matchday, at 3 o’clock, is a war.

Goalkeeper Dave Beasant gives, perhaps, a more realistic portrayal of how the duo were perceived when he says:

Fash invented a nickname for Vinnie: the Butcher. ‘Give it to the Butcher’.

with a look of amused bewilderment on his face. Both Jones and Fashanu give the impression of men who spent a great deal of time rehearsing for the documentary.

And yet it’s this (partial) myth the pair have built up around themselves – aided by a cast of young, impressionable players and a credulous media – that has obscured the truth that this team, who finished sixth and seventh respectively in their first two season in the top flight, consisted of some truly wonderful footballers.

Of the side that beat Liverpool at Wembley that May, five played for England, Eric Young represented and Vinnie Jones captained Wales, while Terry Phelan played three of Ireland’s four games at the 1994 World Cup (an achievement for which Fashanu takes full credit).

Over the following couple of seasons, those players would earn the club well over £10 million in transfer fees as chairman Sam Hammam cashed in on the team’s success (he would later transfer the club’s iconic home, Plough Lane, to another of his company’s before selling it for commercial development).

At one point, Fashanu eulogises Hammam by comparing him to another charismatic middle eastern soothsayer:

Sam was almost like Jesus in our minds… Almost.

When Dave Bassett left, everyone wanted to go with him because he was like our leader.

Even in later years under Irishman Joe Kinnear, Wimbledon were never regarded with any great grá but managed to finish once again in sixth in the 1993-94 season and generally managed respectable finishes before the financial disparity finally told and they were relegated in May 2000, having spent a scarcely credible 14 seasons in the top-flight.

Perhaps the most important contribution of the Crazy Gang story comes from the man who – as Terry Gibson points out in a dejected blog post – is almost entirely overlooked in the film. Speaking to BBC in the aftermath of the FA Cup win, assistant coach Don Howe (a former member of Bobby Robson’s England staff) says:

People look down their nose at certain people who want to work and graft. This club is a terrific example to the rest of football. There is room at the top. It shouldn’t be Manchester United and Liverpool and all these teams every year. But to hear a lot of people talk – that’s all they want. That’s wrong. That’s not how things should be. People from the bottom should be able to get to the top.

It’s somewhat ironic that the Crazy Gang should be broadcast on the channel which recently smashed the record paid for the rights to Premier League and Champions League games, as the proliferation of television money and the cartelisation of European football means that, however unlikely Wimbledon’s story may have seemed in the 1980s, it’s certain to never, ever be repeated.

Listening to Howe speak, I found myself transported back to the Aviva Stadium on November 2nd last, when St Patrick’s Athletic ended a 53-year hoodoo to once again lift the FAI Cup.

Witnessing the unrestrained joy of the club’s long-suffering fans, the tears of former manager Brian Kerr, and listening to the players talk post-match about how much it meant to them to finally grasp that Holy Grail for the fans, it goes to show that football means far more to a great many more people than mere images on a screen, or the myth-making of certain egoistic individuals.

The myth of the Crazy Gang is an entertaining one, but the truth is an even better story, albeit one with a tragic ending: Wimbledon FC were a true one-of-a-kind, never to be repeated, and English football is worse off for it.

You can watch the documentary in its entirety below.

2 thoughts on “The myth of the Crazy Gang is an entertaining story, but the truth is even better”