The net bulged, the scorer wheeled away in celebration, three goals up before half time – three years of pain about to come to an end.

The Thunder Castle fell silent, with three years of dominance crumbling around them. 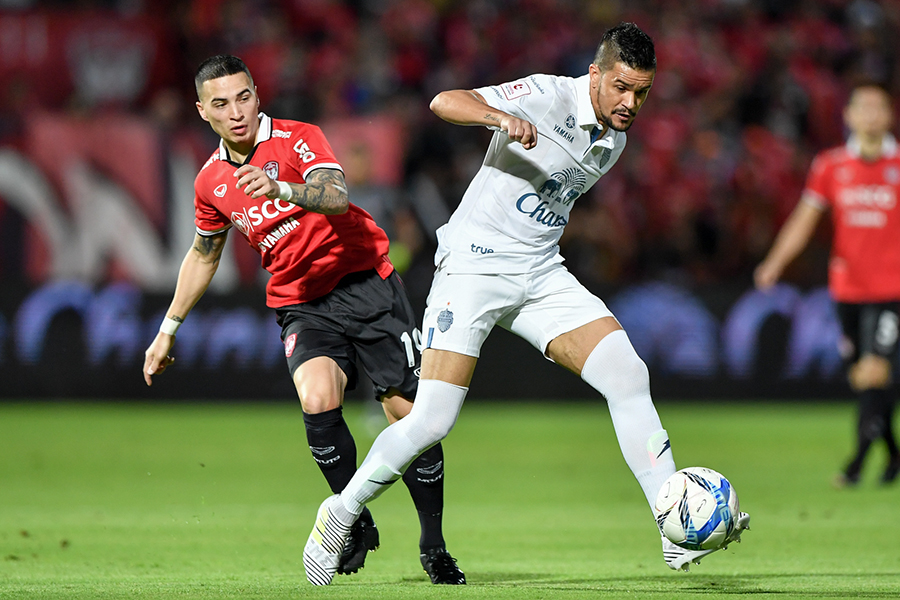 The glamorous capital club versus the rural powerhouse. Nine consecutive titles between them, split four and five. With success and passionate fans locked in binary opposition to one another makes for a Classico that matches up to any in the world.

The names Muangthong United and Buriram United may not be the first ones to come to mind when that description is rattled off.

Miles and miles away from the massive stadiums of Europe or the passionate crowds of South America, a different type of football is on the rise.

Understanding the backstory of Thailand’s biggest rivalry is crucial to truly grasp the sheer weight of the hatred between these two clubs. As Thailand’s league looked to shift into a more professional structure, capital club Muangthong United emerged as the national powerhouse.

National stars such as Teerasil Dangda and Teerathep Winothai led the club to two consecutive league titles directly after their promotion from the second division and looked head and shoulders above all the opposition.

But their dominance was short-lived.

The modern Buriram United was a club transplanted from former capital Ayutthaya by flamboyant politician Newin Chidchob. Despite the move, the club found no difficulty in taking root in a fast-developing provincial town, turning it into the center of football in the country.

Newin’s endless devotion and deep pockets quickly transformed the team into a powerhouse, capable of taking on some of the best in Asia. Aptly nicknamed the ‘Thunder Castle’, Buriram represents the people of the provinces, a growing dissatisfaction with their capital-dwelling counterparts and symbolized the desire to demonstrate the power of their spirit.

With stars such as Ghana’s Frank Acheampong, now of Belgian champions Anderlecht, Buriram United took the country by storm to pip Muangthong United to the league in 2011, creating the swinging pendulum scenario that has come to dominate Thai football for the past nine years.

Buriram United’s longest period of dominance in this rivalry came between 2013 and 2015, as the Northeastern club took all before them in a near perfect clean sweep of domestic trophies, and even made it to the quarter-finals of the AFC Champions League.

The breakup of Slavisa Jokanovic’s “invincible” Muangthong side gave Newin’s club the ideal landscape upon which to dominate, winning three consecutive league titles under the stewardship of four different managers.

However, the Kirin’s fighting spirit would not allow them to be bested. The financial struggles of local sister-club BEC Tero allowed Muangthong to swoop for their promising generation of future national team stars, recruiting the likes of Chanathip Songkrasin, Tanaboon Kesarat, Peerapat Notchaiya and Adisorn Promrak among others.

The appointment of highly acclaimed former Thai National team midfielder Totchtawan Sripan from Police United to replace Dragan Talajic as head coach proved to be a masterstroke as well, as Muangthong United took the league title by storm in one of the club’s best seasons ever.

Despite everything that has come before, no factor has been more toxic to this heated rivalry than the story of one man – Buriram left-back Theerathon Bunmathan. The Bangkok native had been with the club since their early days in the city of Ayutthaya.

The man nicknamed “The Prince of Buriram” was loved unconditionally by the fans before his decision to desert them at their time of need.

When Theerathon had been denied a dream move to Japan on a trialist basis by owner Newin Chidchob, the Prince sent shock waves throughout the nation as he handed in a transfer request with the side sitting in fourth place.

League leaders Muangthong swooped for the fullback, turning him into one of the most hated men in the country.

While Theerathon is not the first man to play for both clubs, the sheer toxicity of the former vice-captain turning his back on the club at their lowest point to don the clothes of their arch rivals is seen as unacceptable by Buriram fans.

Their most recent encounter lived up to expectation with drama and intrigue throughout the 90 minutes. Buriram United came into the match dominant, having won all seven games without conceding a single goal since technical director Bozidar Bandovic took over as head coach.

Muangthong, on the other hand, showed no discernible improvement after a month of heavy transfer spending and have so far struggled to build a cohesive system around their new players. With the provincial side sitting four points clear of their arch rivals, a victory for them would put the title firmly in their hands despite the eleven games left to play in the season.

Despite Muangthong fielding a host of new players, it was a Buriram United’s summer signing, Brazilian attacking midfielder Rafael Bastos, that opened the scoring at the SCG Stadium through a free-kick early in the second half.

Despite the goal, there was almost nothing to separate the two sides on the pitch, with Muangthong grabbing a late goal once again through Leandro Assumpcao. The result was unsatisfactory for both sides, and the run in for the remainder of the season is likely to see the intense rivalry boil over once more.

The hatred between Muangthong and Buriram is one of the rarest seen in the world of football. Their rivalry transcends the boundaries of sport and has the distinction of feeling both demographic and political and yet simultaneously deeply personal.

As the two fight desperately at the business end of the Thai League season, the flames of this undying hatred are set to be fanned once again.