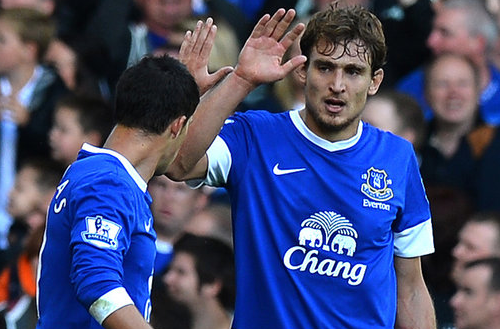 Everton boss David Moyes takes his side to the Etihad Stadium this Saturday attempting to maintain an enviable recent record against Premier League Champions, Manchester City.

In the last ten meetings between the two North West clubs both home and away, Moyes has triumphed eight times and lost just twice. City, for all their success, have found themselves a bogey team in Everton.

When glancing back at the recent period of dominance Everton have enjoyed over City, one must have a great deal of admiration for the way David Moyes has repeatedly sent his team out to outwork, outthink and outbattle their wealthier and more celebrated opponents. The expenditure shelled out by City’s Arab owners could have bought Everton Football Club several times over. Moyes must often wonder what he could do with the resources afforded to current City boss Roberto Mancini. And therein lies an interesting encounter off the pitch too.

It appears the Scot has been able to match and even outwit his Italian counterpart on several occasions. Famously, the two nearly came to blows toward the end of a spicy encounter at the Etihad in 2010. City, trying desperately to reach their target of Champions League qualification were beaten 2-0 and frustration boiled over as the two managers clashed on the touchline. Apologies were exchanged but Moyes has been able to get under Mancini’s skin ever since.

In two separate defeats at Goodison Park, Mancini has twice admitted in post-match interviews that he had failed to prepare his City team properly for the games. These were startling and careless confessions in front of the waiting media hounds, who were ready and willing to show Mancini to be bemused by his side’s capitulation at the hands of a team more than capable of going toe-to-toe with the main contenders in the Premier League. Whether these blips were due to poor preparation on Mancini’s part or victory for Moyes in the mind games, it possibly showed the Glaswegian holds the upper hand in the two’s relationship.

Last season’s match-ups were both tight affairs. The game in early season at the Etihad saw a scintillating City side somewhat frustrated by an out of form Everton team determined not to go down without a fight, and although the Toffees posed little threat to Joe Hart in Manchester City’s goal, their attacking weapons such as David Silva and Sergio Aguero were expertly blunted by a rugged Everton rearguard. Eventually as the second half progressed, City’s superior class, and at that stage of the season their superior form prevailed and they ran out victors by two goals to nil.

The return fixture at Goodison in late January came at a time when Everton were starting their obligatory late season push and City were beginning to have a little wobble on their quest for the title, which made Mancini’s post-match comments even more puzzling, as his side were just hitting a temporary crisis of confidence. A first half shaded by the home side brought its rewards early in the second as ex-Man United man Darron Gibson crashed home what proved to be the winning goal. Everton were then able to cover all bases as City huffed and puffed but failed to have the necessary force to blow the Goodison house down. It was quite ironic that it was Everton who came to Mancini’s aid in the epic 4-4 draw at Old Trafford which went a long way to helping secure City’s first title in 45 years.

The season so far has been a mixed bag for both teams. Manchester City find themselves in second place in the table, tucked nicely behind their bitter rivals Manchester United, without having hit their straps yet. Last year’s sparkling attacking play has yet to be recreated and at times their defence has been far from secure. They have also endured a nightmare campaign in the Champions League ‘Group of Death’ where their elimination means they can now concentrate solely on domestic matters. They do remain unbeaten and with a superb home record it must only be a matter of time before they go through the gears in their attempt to retain their crown.

Everton’s season has stalled to some degree after a lightning quick start. Six draws in the last eight games and no clean sheet in nine shows the Toffees are struggling to put their opponents away in games where they are dominating. However despite this, it has been a much better start to the campaign for Moyes’ men both with results and performances and they can go into this match knowing they are able to run the champions close. Their aim will be to maintain their place in top 6 over the busy festive period and see if they can throw their hat in the ring for fourth place.

Both sides will go into the game thinking they can win and with the defences at either end showing unusual signs of weakness, goals can be expected. Time for David Moyes to cast another spell to bewitch Roberto Mancini?