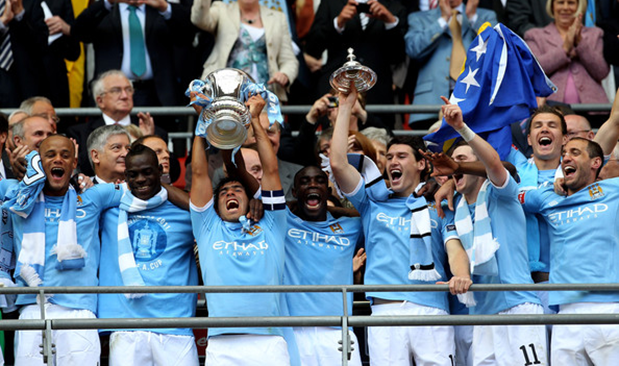 The FA Cup of 1974-75 was memorable for a number of reasons. There was the unlikely story of skinny Rochdale striker Alan Taylor signing for West Ham and winning the cup for them with six goals in the last three rounds, Then there was the pay on the gate crowd of 56,742 at Highbury for the Arsenal v West Ham quarter final, and the fashion crimes of the pitch invaders at the final itself – huge shirt collars, tank-tops and the like.

This could be considered the last golden age of the competition, when clubs could be relied upon to compete rather than treat the whole thing as a hindrance. The Cup was looked on as something special, before it was cheapened by sponsorship and penalties and starved of oxygen by the ‘Champions’ League.

The non-League sides were outstanding. Wigan’s game with Shrewsbury pulled in 11,860, Blyth attracted a record 8,500 to Croft Park for their first round tie with Preston, while Southern League Wimbledon and Isthmian League Leatherhead both reached the fourth round proper – the last time two semi-pro sides made it this far in the same season.

Isthmian League Leatherhead, boasting three England Amateur Internationals, despatched Bishop’s Stortford, Colchester and Brighton to earn a home tie with Leicester City. Tanners’ striker Chris Kelly scored the winner (a superb solo effort) at the Goldstone Ground, and having been dragged mid-celebration from a Brighton pub by Match of the Day, predicted he would do the same to Leicester in the next round

Games like this evoked a different time and place. The lack of live TV meant the whole thing was the preserve of the committed fan, not the couch potato, The Tanners’ green and white also strip stood out – unusual colours, plain and unfussy, unsullied by sponsorship. Leatherhead were drawn at home but the tie was switched to Filbert Street, as was possible then, and with 32,000 in attendance, faced a Foxes side including Keith Weller, Frank Worthington and Jon Sammels.

Unfased, the Surrey outfit went 2-0 up through Kelly and Peter McGillicuddy, the upholsterer and plasterer of the Leatherhead XI. It would have been three but for a goal-line clearance after Kelly had delayed his shot with a trademark shuffle that displayed the confidence of a player and a team that wanted to win in style. Sammels later confessed that at 3-0, Leicester would have been finished. Sadly for the Tanners, this was the turning point. The fitter Leicester players made the most of their reprieve, and three second half goals earned a 5th round tie at Arsenal.

While Leatherhead were failing gloriously in the Midlands, Southern Leaguers Wimbledon were enhancing their Football League credentials with a superb goal-less draw at League Champions Leeds United. Their Cup run resembled a nightmarish train journey, taking in Bracknell, Maidenhead, Woking, Guildford, Bath and Kettering before criss-crossing the Pennines. The string of victories included a 1-0 win at First Division Burnley, as the Dons became the first non-league club in a century to beat a first division team on its own ground.

A Mickey Mahon goal was enough to eliminate a Clarets side including Leighton James, Bryan Flynn and Ray Hankin, and the Dons were soon to have their own household names. Not least goalkeeper Dickie Guy, whose save from a Peter Lorimer penalty in front of 46,000 at Elland Road earned the Plough Lane side a replay at Selhurst Park.

Forty-five thousand turned up to see a desperately unlucky deflection off Dave Bassett win the game for Leeds. Where Leatherhead, like other Isthmian clubs, saw cup success as the height of their ambitions, Wimbledon’s focus was now the Football League. After eight Isthmian titles the Dons had joined the Southern ranks in 1964. A further hat-trick of Championships in the 70s, plus their Cup heroics, gave them a cast-iron case for League membership, which they finally secured in 1977 at Workington’s expense,

As for Leatherhead, the core of their squad stayed together. Kelly spent a brief, unhappy time at Millwall before returning to Fetcham Grove and along with four others from the Leicester game, featured in the Leatherhead side beaten 3-1 by Altrincham in the 1977 FA Trophy Final, . Subsequent years brought more Cup success, with wins over Cambridge United and Northampton Town, though a cash crisis in 1999 nearly finished the club before a supporters’ group took control. These days, Leatherhead mix it with Met Police and Merstham in Division One South of the Isthmian League, while running 21 youth and reserve sides. Balancing the books is now the priority. Future forays into the fourth round may have to wait.

Fittingly, Wimbledon’s penultimate FA Cup tie in the non-League ranks took them to Leatherhead on 14th December 1976, where the battle of the giant-killers ended 3-1 to the visitors. By now, an extended Cup run was almost expected, and The Dons two games with Middlesbrough in round three – a goalless draw at Plough Lane and and one goal defeat at Ayresome Park – confirmed them as worthy candidates for League membership.

The tale of Wimbledon’s rise and fall, their FA Cup victory and subsequent rebranding in Milton Keynes, have been well told. One constant in the drama has been Dickie Guy, a vociferous opponent of the MK move, and now President of the Dons’ successors, AFC Wimbledon. After just nine seasons the new club finds itself in the Football League, (and have come uncomfortably close to playing MK in the Cup) – a scenario Guy must find familiar. On current form, a repeat of The Dons 80s ascent can’t be ruled out. Either way, Wimbledon are in better shape than the competition which made their name.