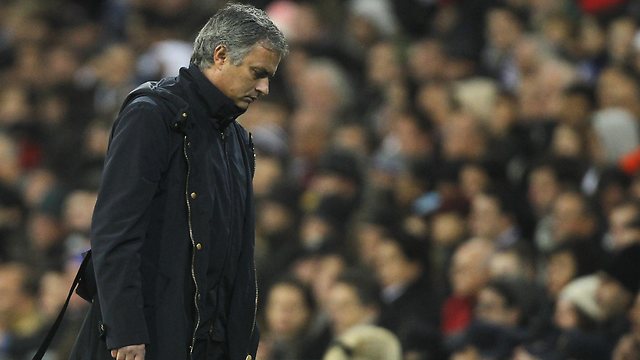 It’s taken a while, but sections of the English press are slowly turning on the Special One. A partnership that once flourished as Fleet St would lap up his every word; like teenage boys salivating over the latest Emily Ratajkowski shoot; has hit some shaky ground after his most recent outburst following a late defeat to bottom-placed Sunderland.

There’s no denying he can be clever, funny and entertaining, but his hypocrisy and the ridiculous statements made this season cannot be ignored. Nor can his shortfalls tactically in failing to find a way past some of the league’s lesser sides, nor his inability to get the best out of his squad – particularly when compared to his title rivals this season.

Matthew Syed, author of the critically acclaimed Bounce, didn’t hold back in The Times:

Please don’t suppose that the sarcastic “congratulations” and veiled suggestion of some kind of conspiracy orchestrated against Chelsea by Mike Riley, general manager of the Professional Game Match Officials Limited, was a clever attempt to deflect criticism from his players, or a genius-like ruse to influence the men in black during the run-in. It was nothing of the sort. This was Mourinho in the raw; a glimpse into the curious workings of a mind that has, over time, become detached from reality. Paranoia is, of course, a predictable consequence of vanity. Roman emperors saw plots everywhere, even as they erected monuments to their own invincibility. Mourinho, whose self-importance has long been finessed by an army of sycophants, could see a conspiracy in a bowl of cornflakes.

In addition to comment on his sarcasm, conspiracy theories and conduct in press conferences and on the touchline, some are now also questioning his team’s performances – yes, they’re actually talking about football. The old pattern of excuses and deflection had helped him and Chelsea avoid a “chokers” tag after basically relinquishing their chances of the league title with losses to Aston Villa and Crystal Palace a few weeks ago. But now, with a recent spate of outbursts and uninspiring performances domestically and on the continent, many are looking past the words of the Portuguese manager.

A “breakdown in partnership” is a relevant description when considering the re-emergence of strike partnerships across Europe and the Premier League. Mourinho’s cursing of his strikers and an apparent lack of flexibility or coaching nous to get the best from his astronomically expensive squad, coupled with the media’s criticisms, is an interesting contrast with the more successful hot-shots and tacticians around the continent.

The most obvious example is Liverpool’s Luis Suarez and Daniel Sturridge firing in 50 goals between them this season under the tutelage of Brendan Rodgers. Elsewhere in England, Manuel Pellegrini has often fielded Sergio Aguero (when fit) alongside Alvaro Negredo in a 4-4-2 at Manchester City. Raffael and Max Kruse have been prolific for Monchengladbach in the Bundesliga; David Villa and Diego Costa have fired Atletico Madrid to the top of La Liga, breaking up the big two’s stronghold on top spot and winning through to the Champions League semi-finals; and Fernando Llorente and Carlos Tevez have dovetailed nicely throughout the season to take Juventus to, presumably, another Serie A title.

While many of these teams are toying with various styles and systems, Mourinho’s Chelsea are the same they ever were: physical and fast, they thrive on the counter-attack and play pragmatic, efficient football grinding out results where necessary. However, this style has come unstuck against teams who similarly like to sit deep and absorb pressure and a lack of variety or expansiveness has been to their detriment. So defensive and unwilling to attack was his team in this week’s Champions League tie with Atletico Madrid that it has been referred to as the most boring semi-final in recent memory – curiously ironic after Mourinho’s comments in January about Sam Allardyce’s West Ham.

With the resources at his disposal – and owner Roman Abramovich’s desire for attacking football – it is surprising that teams built on much smaller budgets are well ahead in terms of entertainment, namely Liverpool, Arsenal, Everton and Southampton (and that they don’t resort to throwing a John Terry up front as a makeshift Christopher Samba when playing the bottom of the league).

A lack of penetration is indicative of their place on the table as they fail to create as many chances per match as Liverpool and Manchester City. Additionally, Liverpool, the league’s top scorers, play five through-balls per match. City, the next highest scorers, play three. Chelsea only play one.

Instead of trying a more expansive brand of football Mourinho has pointed the finger at his strikers for being too old or not good enough.

All three of Chelsea’s strikers have been potent scorers previously though, so perhaps the responsibility for their misfiring resides with a failure in coaching rather than apparent incompetence. Fernando Torres scored 22 times last season when played in the right system, Samuel Eto’o is still a world-class finisher despite his age (although Mourinho made the signing himself so this criticism seems bizarre) and Demba Ba has scored goals when given the chance.

If Mourinho believes the striking situation is as dire as he makes out, the question must be asked as to why a better one wasn’t prioritised in the summer. Gonzalo Higuain, Radamel Falcao, Alvaro Negredo and Edinson Cavani were all on the market and moved clubs. With a transfer budget that allows them to compete with any club in Europe, an argument of inadequate players/resources cannot be taken seriously.

In regards to coaching and making the most of what’s at their disposal we need to look no further than Merseyside. Brendan Rodgers, and to a similar degree Everton’s Roberto Martinez, have managed to extract inspiring performances from their players. Where they’ve been short in their squad they’ve offered young players an opportunity and they’ve thrived.

Liverpool’s Raheem Sterling, Philippe Coutinho and Jon Flanagan have all looked like quality players this season – all of whom have had questions raised throughout their short careers over whether they’d make the grade – while Steven Gerrard has transformed into the English Andrea Pirlo and Luis Suarez’s output in front of goal has remarkably improved. People are even saying that Jordan Henderson being suspended for three of the last four matches of 2013-14 could cost Liverpool the title. If you’d said that at the start of the year you’d most likely be watching this season unfold in Weston Hills. For this Rodgers must take credit.

In addition to individual performances, Rodgers has shown dynamic tactical flexibility – again, in contrast to Jose Mourinho. Liverpool have played 4-2-3-1, 4-3-3, 4-4-2, 4-1-2-1-2, 3-5-2 and 4-3-2-1 this season. Suarez and Sturridge have filled a variety of positions across the frontline as Rodgers has tinkered with where to get the best out of them while keeping them both in the XI. Coutinho has been moved from number 10 to left wing, to central midfield and Raheem Sterling has played on both wings, as a wing-back and more recently at the apex of the midfield.

Liverpool have clearly become more than the sum of their parts and Rodgers has gained an upper hand over many in the league through his versatility and ability to coach his players to fit into a variety of systems, as well as being able to play probing possession football and being ruthless on the break.

In Spain, the criticism often directed Mourinho’s way was that although he is a great motivator and man-manager, he could not match up tactically with the Guardiolas and Bielsas in La Liga and the likes of Jurgen Klopp in Europe.

Considering how “bad” his strikers are, it is interesting (or rather unsurprising if you share the Spanish view) that he hasn’t experimented with a striker-less formation. Vicente Del Bosque with the Spanish national side, Pep Guardiola at Barcelona and Luciano Spaletti at Roma have all used different systems without strikers to great success. With wide goal-scorers and creative attackers like Andre Schurrle, Eden Hazard, Willian, Mohamed Salah and Oscar, Mourinho has the players at his disposal to experiment with a different style but has opted not to.

(Some may argue he already has by playing Schurrle up front on occasion this season, but the German was often positioned as a lone striker and looked to get in behind the opposition centre-backs, much more like a regular nine than a false-nine).

Mourinho making excuses for his team, and accusing Liverpool of having an easy ride this season without European competition (even though in the Premier League era no team has ever won the league title while not playing in Europe, let alone gone from seventh to first in the space of a season), is just typical Jose covering his back if he falls short of expectation. Liverpool winning the league with a thin squad costing far less than Chelsea’s makes him look bad, and the illusion that his team is inadequate for a title challenge may just purport the myth that he needs more money to spend – to both the media and owner Roman Abramovich.

Suggesting his squad is short of being capable to challenge for the title, and such claims of a disadvantage, ignores and discredits the fantastic work Rodgers has done with Liverpool and the changing responsibilities of a manager in 21st century football. The “little horse” analogy only holds up if we ignore that he’s spent over £110m this season on reinforcements, that on average he trots out the most expensive starting eleven in the league and that he started the season with the eighth-oldest squad (Liverpool, Arsenal and City all younger).

With coaching and tactical experimentation becoming more prevalent and important in the Premier League, man management and a reactive, disciplined style of play may not be enough for Mourinho to continue to be hailed as a genius. His complaints throughout this season simply don’t stand up. In fact, he has taken a team that finished third last year and, the way it stands, has failed to improve them. Not because of strikers, fixtures, conspiracies or bad referees though, but for a lack of versatility, not prioritising key signings, an unwillingness to adapt and not getting the best out of his players. Mourinho has no one to blame but himself.

3 thoughts on “Mourinho’s mess is his own making”