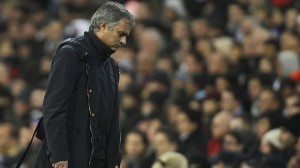 Jose Mourinho, for all his abrasiveness, has long practised the art of the platitude. His time as a top-level manager is littered with faux sincere assertions about the capabilities of the opposition, the worth of their existence and the magic of football as it exists in his host country. If he is in the mood, all is “beautiful”, “proud” and “spectacular”.

Such utterances are by design of course. In anticipation of Sunday’s home fixture against Manchester United, the Chelsea manager was keen to emphasise the visitors’ qualities, even in the face of their tumultuous season. The champions remained, he said, a dangerous prospect: ‘when the giant is sleeping, the giant is never really sleeping’. It was a gracious – and typical – nod to the talents of a side which has looked anything but gigantic since David Moyes’s succession as manager.

United’s failings have been plain for all to see but their pedigree and big game mentality is not quite eroded to the point where they represent a mere walkover to those with designs on their title. To have sent his charges out against a piqued rival would have been remiss to say the least; rather an opponent low on confidence than one high on indignation brought on by a slight, be it perceived or real. In a week where he had restarted the long game of guiding the coveted Wayne Rooney in the direction of Stamford Bridge, Mourinho was not about to further stir the pot.

The subsequent victory over an anaemic United was enough to offset the initial niceties and in the wake of a comprehensive result Mourinho bared his teeth, confident that he had finally seen off one significant challenger in the pursuit of his first English title since 2006. In a Premier League as mercilessly competitive as this season’s contest is proving to be, the 14 point gap between seventh and first might as well be a chasm. It is a space populated by the not inconsequential likes of Everton, Tottenham, Liverpool, Manchester City and the leaders Arsenal. Chelsea themselves sit in third place, gathering familiar momentum at a crucial juncture.

The Portuguese was delicate in his assessment of the task now facing Moyes but the cold meaning was loud and clear. “I don’t think David will be upset if I say the reality: 14 points difference and 13 and 12 [to City and Chelsea]. Can they recover to one of those teams? They can but to three of them? It needs three teams to have almost a collapse”.

In short, Mourinho has pronounced Manchester United’s year dead and based on Sunday’s showing it is hard to argue with that diagnosis. A spritely opening aside, the visitors’ campaign was distilled into a single underwhelming and soulless defeat. Injuries to Robin Van Persie and Rooney had robbed them of their two best players even before a ball was kicked. In their stead the inconsistent Danny Welbeck was expected to lead the line, a task he carried forth with trademark ineffective enthusiasm. The defensive frailties that have plagued this team were once again on full display and even with captain Nemanja Vidic in situ there was little to withstand the clinical tip of Chelsea’s spear.

Having wiled away two years in the footballing backwater of Dagestan, one could be forgiven for considering Samuel Eto’o’s best days behind him. Yet it should be remembered that his time with the Anzhi Makhachkala vanity project was about little more than obscene amounts of money. At 32 he can no longer be counted amongst European football’s deadliest centre forwards, a distinction he once held with little argument, but he is far from a faded superstar. Against a dithering rearguard Eto’o rolled back the years, his superior instincts and patented finishing skills putting United to the sword as they did for Barcelona in the 2009 Champions League final.

Ironically Eto’o’s opening strike – worked from nothing – deflected wickedly off the outstretched leg of Michael Carrick. An achilles problem has served to upset Carrick’s season thus far and the absence of his steadying, stately presence has been keenly felt in a United midfield which appears increasingly undermanned. That he should contribute so tellingly to Chelsea’s first goal may have signalled to Moyes that this was unlikely to be his day. By contrast Mourinho watched with expectant impassiveness as his own engine room of David Luiz and Ramires enforced its will on Carrick and Phil Jones.

The residue of Alex Ferguson’s time on the touchline has not quite lost its potency and the players he once marshalled know how to keep at it, if nothing else. Javier Hernandez’s goal may have provided some measure of respectable consolation but the benignly dismissive nature of Mourinho’s post-match comments revealed both the extent of United’s fall and his personal satisfaction at vanquishing a club which eschewed his services in favour of a man he now views not with wariness, but with benevolent pity.

These are changed times indeed.