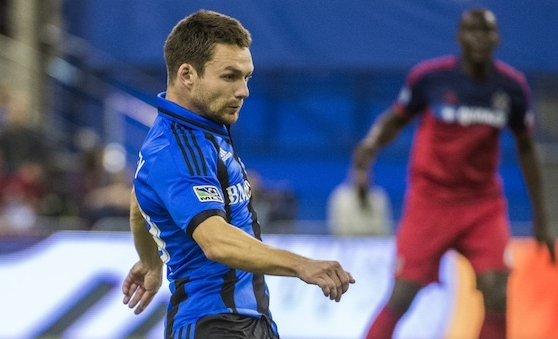 It was an early season move that took many by surprise but Montreal Impact are now hoping to reap the rewards of a new lease of life for young striker Jack McInerney.

The 23-year-old bagged a goal on his debut in the 1-1 draw with Chicago Fire on Sunday after joining the club a fortnight ago from the Philadelphia Union in a trade that saw Andrew Wenger move the other way.

For the first half of 2013, “Jack Mac” was one of Major League Soccer’s hottest properties as he netted 10 times in the Union’s first 14 games.

McInerney’s performances were so good that he was named to the All-Star team to play Italian giants AS Roma, and he also earned himself a call up to the US national team for the CONCACAF Gold Cup.

However, the goals dried up in the second half of the season as the Union failed to reach the playoffs and finished 14th on the combined Supporters’ Shield ladder.

According to Union boss John Hackworth, the club’s top scorer for each of the last two seasons was surplus to requirements and a swap deal that included Wenger was agreed with the Impact.

“Jack was an important member of our squad over the past four years,” said Hackworth of the striker who went 15 games without scoring between early June and late October last year.

“But the reality is our team has evolved and this deal puts our team in a better overall position long-term.”

McInerney was quick to shoot down any suggestions that he wanted to leave Philadelphia having been part of the club since its first MLS season in 2010.

“People were saying that but I was asked if I had the opportunity to go to Europe and I said I would consider it,” he said before heading across the border.

“I didn’t say that was something I was going to do. I was happy here in Philly. I didn’t want anything to change at that point.”

The trade looks to have suited both sides, with Montreal sporting director Nick De Santis expressing his delight at bringing in a proven goal scorer.

“We are extremely pleased to be able to bring in a player of Jack McInerney’s quality,” he said when the trade was announced.

“At a young age, he’s already showed the ability to score goals in this league and we feel his qualities and soccer sense fit well within our style of play.”

Partnering McInerney up front is veteran Marco Di Vaio who just missed out on the league’s Golden Boot award for the 2013 campaign after netting 27 goals.

“He kind of just said hello, said ‘We’ve been wanting you, we’re happy to have you, and hopefully you score some goals this year,’” said McInerney of his first chat with the Italian.

Di Vaio isn’t far off retirement and will no doubt be looking to pass on some advice to his new team-mate who should become the 37-year-old’s replacement as the focal point of the attack.

While there were obvious teething problems with the partnership against Chicago, McInerney and Di Vaio still combined for the Montreal goal.

“For moments, they were good, but for sure, it’s going to get better as time goes on,” said Impact coach Frank Klopas after the game.

With three wins and three defeats from their first six games so far this season, the Canadians are banking on the duo getting to know each other well sooner rather than later.

The noise coming out of Montreal suggests that McInerney’s new team mates are pleased to be playing alongside him rather than against.

“I’m happy to see him amongst us because I can tell you he’s one of the players that will most make life difficult for you in MLS with his movement and his thirst for goals.”

Montreal fans will be hoping that McInerney can help the club out of its current slump to reach the playoffs for the second successive season.