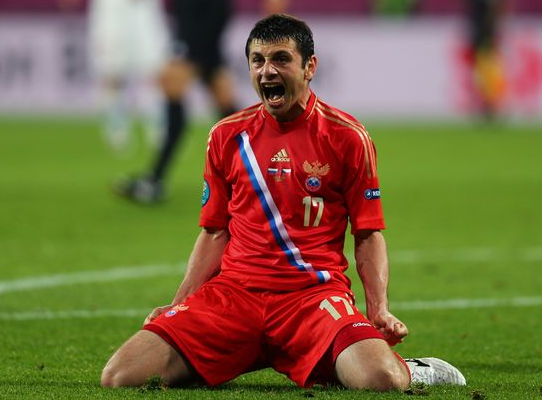 In September 2007 I was mesmerised by one terrifically talented teen playing in the toughest division in Russian football – the Ural-Volga section of the 2nd Division (national 3rd tier).  He was playing with my clients local rival Dimitrovgrad and seemed to glide past players, creating chance after chance for other players.  Krylya Sovetov SOK-Dimitrovgrad were the feed-up professional club for the Konoplyov Academy.  A foundation begun by an oligarch to break from the crumbling norms of Russian youth development.

The talk that day in the 3,000+ crowd was of the little wizard who was being sought after by “Moscow”.  Nobody quite knew what club, but rumours were that it would be CSKA.  FC Volga won that day by a single goal on the way to winning the division and the home side moved their football base to Togliatti (home of the Lada) and continue in the same division today.  The wizard was making one Alan Dzagoev look good.  To date Dzagoev has been the most acclaimed product of the Academy now looked after by Roman Abramovich, who also backs CSKA.

While the kernel of youth development is respected and developed in Togliatti, elsewhere in Russia it ranges from disastrous or disastrously corrupt to downright dangerous, and everything in between.  A look at national youth teams points to the regions being the source for players.  To get a spot in a good club very often talent is not enough and this goes all the way to the Reserve teams of clubs like Lokomotiv and Spartak Moscow, players pay up to $10,000 for a squad place and amateur contract, hopeful that their talent will be noticed by someone, somewhere.  Short term views, disgruntled, unappreciated staff and severely under-educated assistants have left the youth football scene ripe for abuse by unscrupulous “fixers” who in 99% of cases work in active co-operation with club officials and coaches.  The trade in teenage footballers runs well outside any FIFA law, however it keeps the system alive and everyone is happy.  The education of young footballers in all aspects of their lives is faulty at best for Premier clubs.  Some, like FC Krasnodar, are trying to change this, though the prevailing attitude is one of get the best out of players as quick as possible.  As one notable coach here stated – “there are lots more to choose from.”  From top down there is limited guidance and it is largely left to small 3rd, 4th and 5th tier clubs to get the best out of young players.  However as soon as one of the big clubs come calling to the capital, players disappear, only to arrive back on loan a couple of years down the line as lesser players, or worse.

With the upcoming FA presidential election much is expected to happen for youth development, that a unified program will be set down and carried out, that coach education will be improved and enforced.  It has been explained to me by a tennis coach that the overall lack of sports coaching quality in Russia is down to the fracture brought about in the 1990s.  Whereas prior to the dissolution of the USSR coach education (outside of chemical “assistance”) was above and beyond what was in practice elsewhere.  The maximisation of athlete potential, study of physiology and best practice, were studied, learned and successful.  However once the state ceased funding the full bill, the exodus of the best sports coaches and research talent (including those with chemical expertise) was such that the system of knowledge transfer in Russia broke down.  Those left behind were  seen as not good enough to make the grade internationally and did little to advance domestic coach development.

Having witnessed coaching practices in football, tennis and rugby that would make a 1980s primary school teacher cringe with embarrassment, much needs to be done to fix it, and money is always seen as the solution.  And this brings the circle to a close, money.  The midfield wizard from Dimitrovgrad turned up in a fifth tier match in Ulyanovsk last year and he makes ends meet as a security guard in a local shopping centre.  Over coffee we discussed his career.  He’d been taken on trial with Spartak Moscow in November 2007 and even went to training camp with them.  An unwarranted approach by a senior coach one evening left him badly shaken.  When he reported this to a team manager the coach was sent home and he was released from camp a day later.  Dumped in an airport in Turkey with a ticket in his hand and not a rouble in his pocket.  He arrived back in Moscow and had to beg a lift back to the city, he arrived home in the region he still lives in two days later.  I verified this tale with a Spartak staffer who reassured me that the coach was now “retired” and more stringent guidelines were now in place, it wasn’t the first or last story of it’s kind that I’d heard.  This coach was indulged as he was loved by the “fixers” for passing on players to make money for middlemen and clubs.  He made money for his own club and sadly his ability to coach well, was overtaken by his darker side. So while Dzagoev earns $30,000 a week in Moscow, his former team-mate earns $333 per month protecting an Irish investor’s shopping centre.