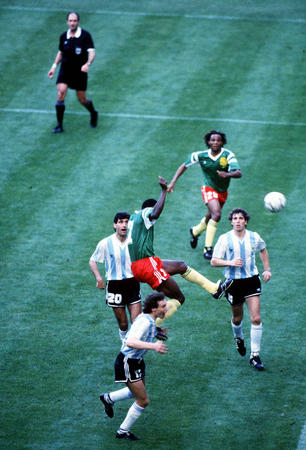 Moments of Magic makes its long overdue return with a look at the goal that caused one of the biggest shocks at the 1990 World Cup.

Reigning champions Argentina went into Italia ’90 as one of the favourites for the tournament and reached the final, but not before they were embarrassed by Cameroon in the opening game.

The South Americans, led by their talisman Diego Maradona, were expected to cruise through their first game but got more than they bargained for against the African side.

An aggressive Cameroon made their intentions clear early, picking up four yellow cards, though they were lucky to go into the break on level terms as the 1986 champions came close to scoring on more than one occasion.

Cameroon suffered a blow just after the hour when Andre Kana-Biyick saw red for a  tackle on Claudio Cannigia but they still managed to take the lead minutes later.

A free kick on the left wing was swung into the area and Omam-Biyik rose high above everyone else to send the ball goalwards.

The effort was straight at goalkeeper Nery Pumpido but he made a mess of it and allowed the ball to trickle over the line, much to the delight of the Cameroon support.

With their backs to the wall for the remainder of the game, Cameroon finished with only nine men following the dismissal of  Benjamin Massing (see video below) but even that couldn’t take the shine off a remarkable result.

Cameroon turned out to be one of the biggest success stories of the World Cup, as they reached the quarter finals where they lost to England after extra time.

Roger Milla, the 38 year old who only played in the tournament after a last minute request from Cameroonian President Paul Biya, entertained crowds with his dance routine in front of the corner flag after each of his four goals.

In the three tournaments following Italia ’90, Cameroon failed to get out of the group stages before failing to qualify altogether for the finals in South Korea and Japan in 2006.

François Omam-Biyik played 63 times for his country and enjoyed a long club career that included spells at Marseille, Lens and Sampdoria amongst others.

He retired from the professional game in 2000 and now coaches in the Mexican Second Division.