While football fans across the world tuned in to see if Leicester City could clinch the title at Old Trafford, the quiet Mozambican city of Beira – some 8,000 miles away from Manchester – had another game on its mind.

Following a morning filled with drink and dance to celebrate International Workers Day, an animated crowd of around 5,000 filtered into the Estádio do Ferroviário to watch Ferroviário da Beira take on Chingale de Tete in the seventh gameweek of the Moçambola season.

I made my way to the ground, more out of curiosity than anything, in the hope that I could watch an entertaining game of football while listening to the Leicester game over the internet on my phone. 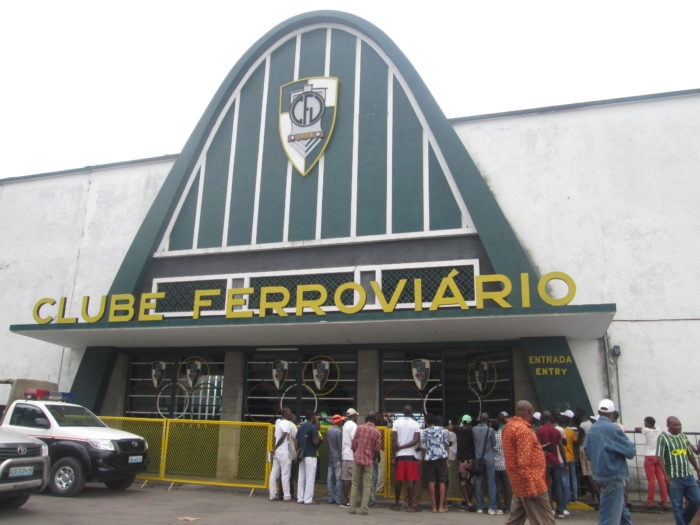 As I approached the ground I quickly realised my plan was flawed, as the sound of drums and vuvuzelas became progressively louder.

By the time I reached the ticket office I could hardly hear the lady behind the counter, as a group of home fans dressed in green capes walked past banging wooden clappers – making Leicester’s plastic clappers sound like nothing more than a subdued round of applause.

I paid 100MT ($2) for a ticket, and made my way into the stands. Immediately I was asked if I was there on a scouting mission, to which I regret replying honestly.

Regardless, I was told to look out for the number seven for Beira, who apparently plays like Nani (I did check that they meant Luis Nani, and weren’t just practicing their English family vocabulary).

Before long I found myself migrating towards the ‘band’ in the corner; I had seen drums used before at Selhurst Park and La Mestalla, but nothing like this. It was like the football on the pitch was being powered by the percussion.

When the musicians got tired, the pace of the game slowed down. When the band were in full force, the Beira players surged forward in search of a goal to please their fans. 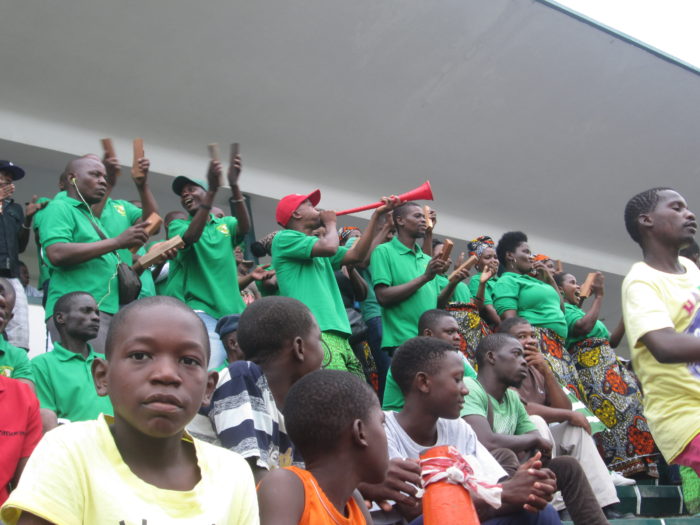 I could just about manage a conversation with the man sat next to me over the noise. He told me he was a Manchester United fan, which reminded me that they would be kicking off around that time back in England.

In fact, I was about five minutes late, and loaded up Twitter to news of a Martial goal and an early lead for United. I informed my new friend, who in a flash turned and told the person next to him.

Within minutes, I was getting thumbs up from the other end of the stand from fans wanting to know the latest score from Old Trafford.

A pattern soon began to emerge. It was too loud for me to listen to the game on the radio, so I decided that during every break in play I would re-load Twitter, and update everyone around me of the score.

Similarly, set-pieces and throw-ins were an opportunity for food vendors to rush into the stands hoping to make a quick sale; and before ten minutes were up I had amassed a bag of crisps, a Fanta and some sweetbread – all bought for me!

Every now and then a free-kick would be taken quickly, and peanuts would be sent flying everywhere as the vendors rushed to duck out of sight.

At one point I noticed a woman with a kitchen knife cutting up fruit to sell. In England you can’t even bring a bottle of water into the stadium. 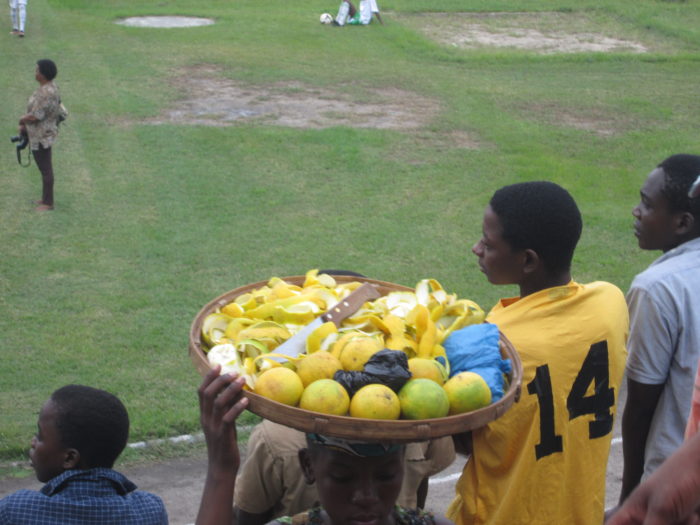 Beira took the lead midway through the first half, after a swift counter-attack and a tidy headed finish from their number nine.

The crowd absolutely lost the plot. Vuvuzelas became beer funnels, and a dance-off broke out between a delirious steward and a younger fan.

The drumming somehow reached a new decibel too. Not long after that, I broke the news of a Leicester equaliser, which was met with similar elation.

The remarkable story of Leicester’s rise, added to the fact that their star player Mahrez hails from this continent, has meant many Mozambican hearts have taken to The Foxes this season.

As the rather eccentric referee blew for halftime, fans dashed towards the toilets below me, some asking me the half-time score from Old Trafford on their way down.

After fifteen minutes of rest, the band kicked back into gear to mark the start of the second half. Familiar chants of ‘Ole, ole ole ole, Beira, Beira’ broke out, with the home team now shooting towards the goal directly in front of us.

A man dressed in full baker’s uniform had shown up over half-time – clearly having made his way straight from the end of a shift – and found himself a space down to our left. Beira, spurred on by the atmosphere their fans were creating, began to dominate the play.

Their ‘Nani’ clone performed a wonderful dummy along the near touch-line, taking three defenders out of the game before putting a dangerous cross in which was the keeper eventually claimed.

This prompted one of the younger fans to rush to the front of the stand to repeat the manoeuvre for those who missed it.

Not a minute later, the number seven found himself on the end of a cross, and delicately flicked the ball into the net – sparking another round of mass hysteria from the home support.

While the celebrations were still in full flow, an opportunistic young woman pulled out a set of lottery tickets from her bag, hoping to cash in on the euphoria around the stadium. 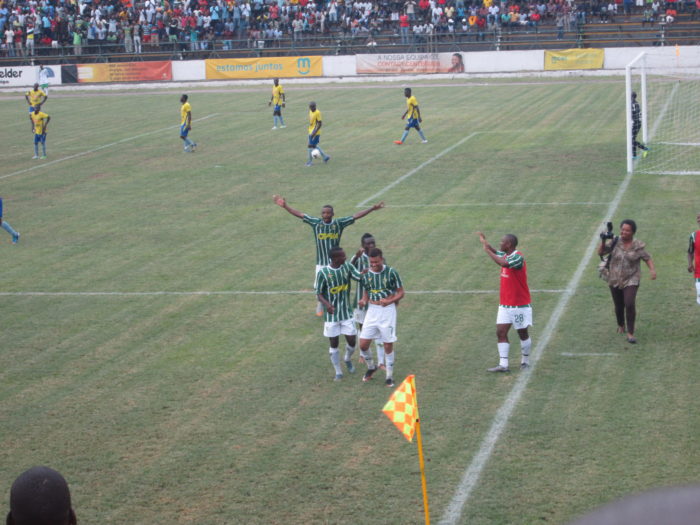 Despite the home team being completely on top, the drumming did not subside. The final half-hour of the game was played at a tempo just as high as the opening minutes.

As the game went on the challenges became more and more physical. Eventually, one of the Tete players – possibly over-enthused by the relentless drumming – took out Beira’s number twenty-two with a horrendous elbow

The referee performed his best Statue of Liberty impression as he brandished a yellow card, drawing a choreographed chant which I only understood one word of ‘vermelho’, the Portuguese for ‘red’.

I used the break in play to check the score from Old Trafford. Still 1-1, but Danny Drinkwater had seen red. The crowd were disappointed at the news, however remained hopeful that Leicester could grab a late winner. 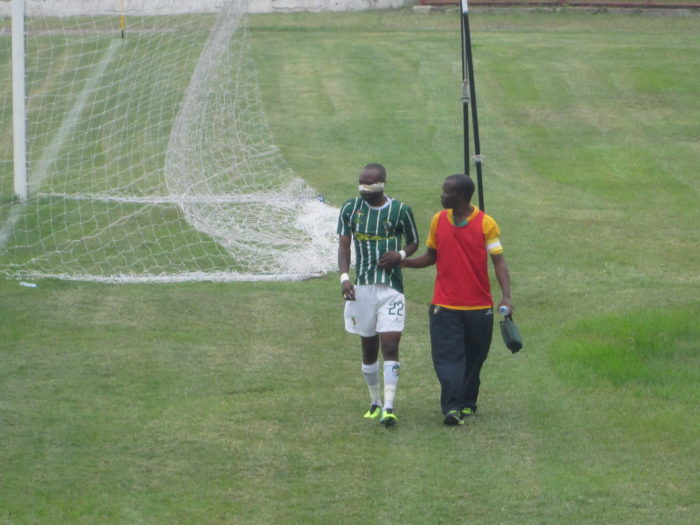 As the Leicester game had kicked off at 2:05pm U.K. time, it meant that Beira’s match finished with five minutes still remaining in Manchester.

The local fans were thrilled with their team’s 2-0 victory, and some stuck around to hear the final score from Old Trafford. I felt like I had my own little ‘Soccer Saturday’ going on in the corner of the ground, as I informed everybody about a late save from Kasper Schmeichel to deny Memphis Depay.

After a tense thirty seconds of Twitter inactivity, finally confirmation of a 1-1 full-time score came through. It would have been great to break the news of a dramatic Leicester winner to clinch the title, but it wasn’t to be.

Despite that, I can’t say I’ve ever enjoyed the atmosphere of a football match more than my visit to Ferroviário da Beira. The quality on-pitch wasn’t exceptional; but the quality off-pitch was an experience of a lifetime.

A trip to a well-supported non-league side in the U.K. is about as close as you will get to matching the carefree environment of an African football match – though the thought of a dance-off at Dulwich Hamlet next time I go to a game isn’t something I really want to think about! 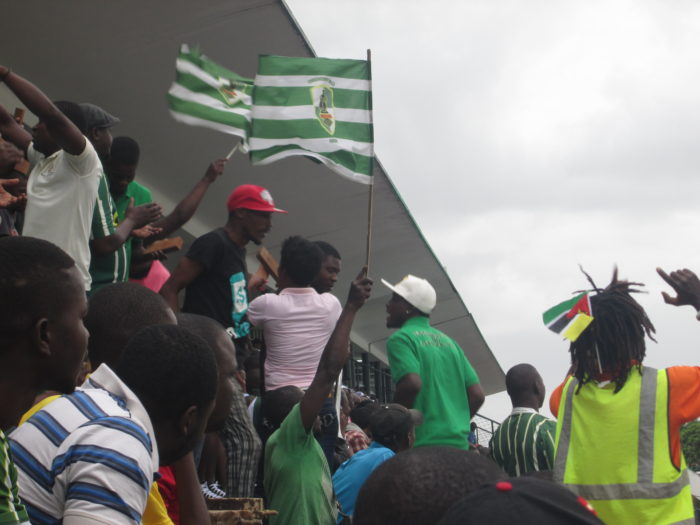 Student at University of Bristol. Can't afford to watch Chelsea, so follow Dulwich Hamlet home and away. Big fan of Latin American football. Currently based in Mozambique.