As seen in recent months, MLS is becoming something of a hotbed for clubs in the Barclays Premier League looking to bolster their squads. There are a number of factors for this:  1) there is no language barrier 2) MLS players tend to be relatively cheap to buy due to MLS’ valuation of players plus the restraints of the salary cap and finally 3) MLS has a very similar style of play to the Premier League. Both are fast, physical leagues whereby players have to find the balance of being technically gifted whilst being able to ride the toughest of physical challenges (not to mention both share packed fixture lists). The correlations between the two are obvious.

Just last season, there were a handful of players who crossed the Atlantic to ply their trade in England. Geoff Cameron and Brek Shea both moved to Stoke whilst Simon Dawkins who, although originally from Tottenham, spent his whole 2012 season at San Jose Earthquakes before having a brief spell at Aston Villa where first team appearances were limited. Roger Espinoza played an important role for Wigan, particularly near the end of the season whilst Kei Kamara was also brought in on loan to Norwich City and won over a large number of fans with his performances. Both leagues complement one another with many Premier League players going the other way. The question is then – in a transfer window where Premier League clubs are desperately trying to bring in quality whilst fastening their belts, why not look to MLS? And if so, which MLS players could come in and have a significant impact in the Premier League? Here are four possible candidates (one for each position). 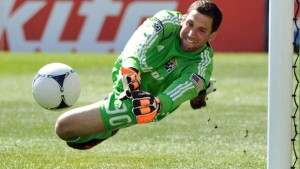 Probably the most underrated yet most consistent goalkeeper in MLS, Andy Gruenebaum was awarded Columbus’ Most Valuable Player in 2012 for his outstanding performances in goal and even the club’s defender of the year! He is the best shot-stopper in the league, recording the highest number of saves in the league last season (124) and currently leading the stat in 2013 with 56. Gruenebaum very rarely makes any blunders and has a strong command of area; he is not one to be afraid of an aerial challenge either. The 30 year old (although a little old for some) could easily follow in the footsteps of ex-Chivas USA goalkeeper Brad Guzan in being a key goalkeeper for a Premier league side. He is not the most fashionable goalkeeper in the league but at a market value of just £225,000, he is surely worth a punt.

Clubs who could do with him: Sunderland, Hull, Southampton 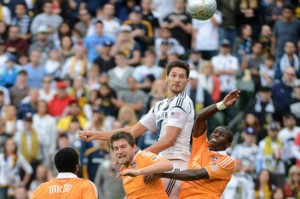 Now a regular starter at the centre of defence for USA, Omar Gonzalez has been flirting with the prospect with a move to Europe for a number of years including a 6 week trial at FC Nurnberg in January which had to be cut short due to injury. Standing tall at 6ft 5’, the commanding centre back was awarded 2011 best defender of the year and its hard not to see why. At just 24 years of age, Gonzalez is physically very powerful and is incredibly strong in the air which could not be more perfectly encapsulated by his deciding goal in the MLS Cup final in 2012. Gonzalez’s pace and technical ability on the ball could be improved but at just 24 years of age who most likely be part of a central defensive partnership at the 2014 World Cup, he could certainly solidify any Premier League defence. LA Galaxy are considering making Gonzalez a designated player (meaning he will be paid a salary outside the cap) so clubs should look to act quickly if they were to want to guarantee a better deal.

Clubs who could do with him: Arsenal, Aston Villa, Cardiff, Liverpool 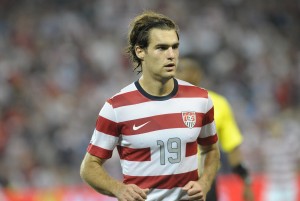 Probably the most likely player to move to the Premier League, Zusi had a trial with West Ham back in January with a move looking to be very likely; however, it didn’t happen and will undoubtedly be looked at once again. Zusi has come on leaps and bounds as a player and at 26 years old he could still develop into an even better midfielder. Zusi of recent months has cemented himself a first team role at right wing under Jurgen Klinsmann for USA due to Landon Donovan still looking to revive some domestic form after his sabbatical.  The Florida native led the league with most assists in 2012 (15) and already has 5 so far this season in 14 games. Zusi looks like he is to surpass his goalscoring total also as he has three to his name this season, just two less than all of 2012. Although The US International lacks pace, he makes up for it as a threatening set piece taker and a technically gifted playmaker. His versatility is also a bonus; he is competent at playing on either wing as well as in the centre of midfield. In terms of credentials in MLS, he is only surpassed by Henry, Di Vaio, Keane and Donovan and if given a move to Europe, he has the potential to reach their level.

Clubs who could do with him: Any team outside of the top four. 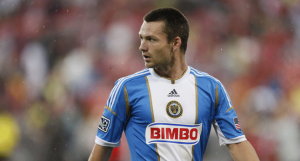 In MLS, there are a notable few strikers who could make an instant impact for a premiership side; there are ones we have seen before such as Henry, Di Vaio and Keane. However, it is unlikely that at the age and stage that these players are at that they would turn into one of the Premier League’s elite players once again (or just an elite in Di Vaio’s case). So, what must be considered is who in MLS has the most potential to turn into a top quality striker. At the moment, that man is Jack McInerney.

The 20 year olds form this season has been impressive, racking up 10 goals in 14 starts (15 appearances overall) placing him joint top scorer with Di Vaio and Chicago fan favourite Mike Magee. Already McInerney has beaten his record last season of 8 in 18 starts (25 appearances) with that tally looking to rise to more, particularly when considering he is only 20 years of age. His form has caught the eye of Klinsmann and has deservedly been called up to the US’ Gold Cup initial 35 man squad and in the running to be a part of the MLS All-Star team which faces AS Roma in the summer. McInerney is a poacher and has been labelled by some in the American media as the US version of ‘Chicharito’. His ability to play off the shoulder and to be in the right place at the right time is astounding. So many Premier League teams are craving goal scorers with some willing to play exorbitant prices to fulfil that role. According to transfermarkt, McInerney value is £175,000. Interest in the young striker will certainly rise with many scouts booking their flights to US to watch the Gold Cup hoping the young American will be taking part. If a Premier League club took the opportunity, signing McInerney would be a low risk with potentially great rewards.