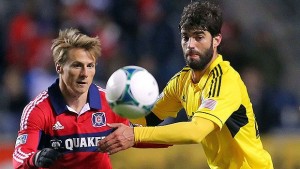 It is a question that is regularly asked in American Soccer circles. When this article was written (15th September) a remarkable 16 teams out of 19 are still in the running to make the play-offs and beyond that, the MLS Cup with – for most teams – 6/7 games left to play. In the Eastern Conference, 11 points separate leaders New York Red Bulls from Philadelphia Union who currently occupy sixth place, one position away from the play-off spots.

In the West it is even tighter. Nine points divide first and sixth (Seattle on 49 points, Dallas on 40). Who is going to win the Supporters’ Shield is anyone’s guess. It is hard to think of any time in a professional sports league where so many teams have a chance of winning a competition with so few games remaining.

For you as the reader though, whether you support an MLS team or not, do you find the prospect exciting that so many teams have a chance of achieving domestic cup glory irrespective of whether you come first or fifth or are you more of a traditionalist? One who believes that to win a domestic league title, you have to come first in your division. If your viewpoint is the latter, then the truth of the matter is you probably are not a fan of the way MLS is being run. 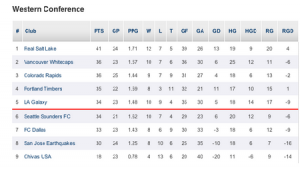 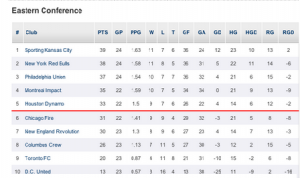 In a league like MLS, a premium is placed on equal opportunity.

Back in the formative years of MLS, the opinion shared among league officials was that they did not wish to see a repeat of the NASL. Everybody knew of the New York Cosmos and the glitz, the glamour that surrounded them. They were truly a global brand, but at a great cost. The Cosmos and Tampa Bay Rowdies were the Real Madrid and Barcelona in American Soccer, far greater investment was plunged into Florida and New Jersey based sides than any other. Unsurprisingly, this affected the competitive balance greatly as the Cosmos and Rowdies would rocket up the regular season charts, leaving a number of financially weaker teams in their wake. Jealousy saw owners of the league’s other teams looking to compete, investing in their own ageing stars.

Long story short, NASL owners spent more money on player salaries that could not be covered by league revenue. Financially the effects of the distinct lack of competitive balance ultimately led to the NASL’s demise – MLS does not wish to see a repeat of that. Those at Major League Soccer may not say it but the real motive behind the decision for competitive balance is more likely to be one to keep the league financially viable instead of necessarily striving to keep complete equality on the pitch. 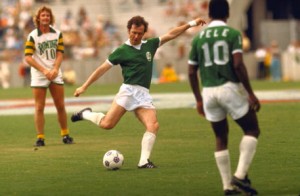 The opposition is that fans enjoy the prospect of the minnows coming up against the power hungry giants. The excitement that derives from the opportunity to beat a team who is considered to simply be better is one of the reasons why many a soccer fan watches the game. The competitive inequality can act as a driving force for bolstering a league’s profile. Take Paços de Ferreira for example, who would have thought at the start of the 2012/13 season that a team who can only hold a capacity of 5,250 would qualify for the 2013/14 champions League play-offs ahead of the likes of Braga and Sporting Lisbon? It is one of those success stories that warms the hearts of soccer fans that their team can compete no matter the difference in finance and support.

The imbalance can also help in raising the profile as talent is concentrated to a few teams, giving off the perception that better soccer is being played therefore the quality is greater. MLS prevent giant-killing stories from happening as everyone is on an equal footing. Is that a such bad thing though? From an economic perspective, it is clearly far more beneficial for owners to see their team have a chance at success rather than just limiting a small number to dominate. In terms of short term excitement MLS may not be able to deliver what other European leagues can. However, what it can deliver is the long term knowledge for fans that their team still has a chance at lifting the MLS Cup in December, which can potentially result in a greater feeling of joy then winning that one match.

There is no doubt that competitive balance can have a detrimental effect on the quality of the product. However, without it the league may be facing the issues today that the NASL were only too aware of when the decision to fold the league was made in 1988. Besides, even with the stringent salary cap rule quality is being improved, the recent acquisition of Clint Dempsey to Seattle being a prime example of this. Whether you believe parity is good or bad for the growth of Major League Soccer, implementing competitive balance looks to have been an act of necessity rather than choice. MLS loves competitive balance and the 2013 season is the perfect advert for it.