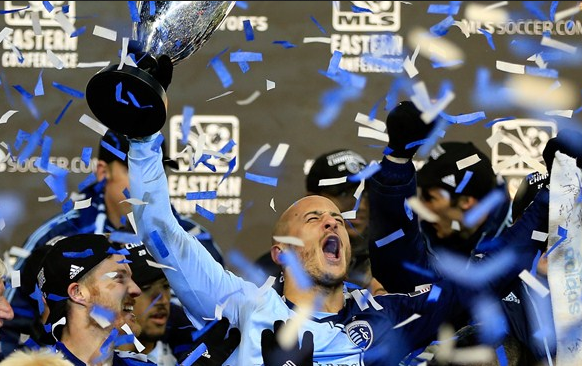 With the new MLS season edging closer, I have been commissioned by BackPageFootball to help you pick your MLS Fantasy team.

Having recommended three top class ‘keepers for your side, it is now time to cement the back line by adding some rock solid defenders to your side. So who do I think are going to be the best picks for the 2014 MLS season?

Probably the most recognised defender in MLS, Frenchman Aurelien Collin was an absolute rock for last season’s MLS Cup winning Kansas City side. Physical, strong and uncompromising at the back, Collin also has a knack of popping up with goals at key times (scoring three times in the playoffs last season) and at the age of 27 is in the peak of his footballing powers.

Collin is expensive at £10million, but seeing as he was the highest scoring defender last season with 220 points, this is somewhat understandable. If you are on a budget then maybe Collin isn’t for you, but if you have the spare cash to spend big on your defence, then the ex-Wycombe centre half has to be the man for your defence.

Having plied his trade all over Europe (in countries ranging from Switzerland to Scotland), Portuguese born defender Goncalves seems to have finally found his feet in Massachusetts. A hugely popular figure amongst fans, Goncalves did not miss a minute of football last season as he was named MLS defender of the year, as well as “man of the year” by his club’s fans.

With a fantasy football score of 187 last term (assisted by 14 clean sheets) Goncalves was easily MLS’s stand out defender of the year in 2013, and although pricey at $9.5million- he should prove a prudent and reliable investment for your side.

Selected by a massive 20% of MLS Fantasy players last season, Drew Moor should prove a bargain buy for anyone this coming campaign. At just $7million, the Colorado man (who previously spent a very successful time at FC Dallas) is surprisingly cheap, having been the fifth highest scoring defender last term.

A goalscoring centre half, Moor has scored 10 MLS goals for Colorado and at the age of 30 has all of the experience and wherewithal to be a quality player at MLS level. His five full international caps for the US National side solidify his pedigree as a quality centre back, and with statistics to match (eight clean sheets and only one red card last season) he should be a shoe in for any team this season.

As a fresh face in MLS football, picking Argentinian centre half Norberto Paparatto would be somewhat of a risk. However, considering Portland’s resurgent form last season under new coach Caleb Porter, and Paparatto’s footballing pedigree it is fair to say that this risk is more than “calculated”.

Standing at a massive 6″4 and aged 30, Paparatto has the physical presence and experience to command any backline, and is reportedly a great threat from set plays (though he has only scored two career goals). Boasting an impressive CV that includes a long spell at Argentine club Tigre, at $8million Paparatto seems well priced for a quality defender in perfect position to gain lots of clean sheets this coming season as part of a solid Portland defence.