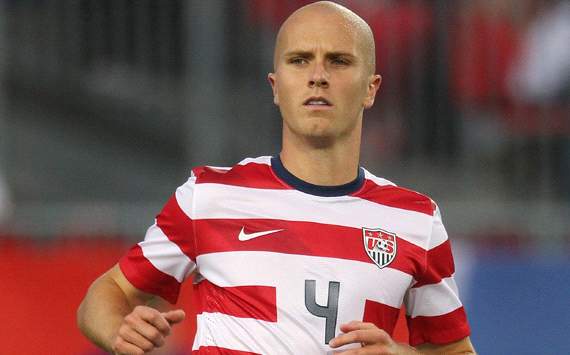 With the new MLS season edging closer, I have been commissioned by BackPageFootball to help you pick your MLS Fantasy team. Having sorted out your defensive unit, it is now time to consider your midfield.

Assists and goals are order of the day for good fantasy team midfielders, so who do I think will be splicing open opposition defences this season?

Brought in by Toronto FC (who seem to be acquiring big names at an alarming rate) in the off-season, golden child of American football Michael Bradley has the tools to be able to hurt any team in the division over the course of the 2014 season. Following highly successful spells in Europe with Heerenveen, Borussia Monchengladbach, Aston Villa, Chievo Verona and AS Roma, Bradley has returned to his native MLS as one of American football’s biggest stars.

Robust and industrious as a central midfielder, Bradley has the knack of scoring big goals, and his passing arsenal should see him rack up a number of assists (especially considering Toronto’s new looking lethal attack). Capped a staggering 82 times for the US National team, scoring 11 times in that period, MLS’s new poster boy looks to be a steal at $10million. A real American footballing icon.

Aside from having a name like a hip-hop artist, this Tacoma born attacking midfielder has much to offer your side. Steadily improving since his arrival in MLS in 2009, Neagle enjoyed his best season to date in 2013, bagging eight goals and four assists for the team in green.

Although his statistics are not necessarily the most striking, Neagle is a player improving all the time and approaching his peak at the age of 26. Combine that with his relatively affordable price of $7.5million, it seems that this pint sized, pacey star would be a shrewd investment at a squad level.

Putting Swede Stefan Ishizaki in your team would constitute somewhat of a gamble, but the relatively unheard of central midfielder has all the attributes to take MLS by storm. Having spent the majority of his career at Elfsborg (racking up over 180 appearances for the club), Ishizaki has a goals per game ratio of around one goal every four games (impressive for a midfielder) and at the age of 31 has amassed masses of big game experience as well as 13 full international caps.

Steely, tough and a dead certainty to play a key role in a hungry Galaxy team, expect the $7million you spend on this big Swede to go a long way. A potential bargain.

On paper, Argentinian star Diego Valeri should be pretty much an automatic starter for any MLS Fantasy player. Granted, Valeri will set you back $10.5million, but your money will go a long way. Valeri was named MLS Newcomer of the Year last season, clocking up a league best 13 assists and 10 goals.

When you add that to his footballing pedigree (having played with Lanus, Almeria and Portuguese giants Porto plus three senior international caps for La Albiceleste) and the central role for Portland he is set to play this season, we could see a matching or even on improvement on the massive 178 points from last season.

Quite simply the assist man. At $11million, putting established Dynamo star Brad Davis in your side would be somewhat of a premium investment, but the US international’s statistics speak for themselves. Davis has amassed a career total of 101 assists in MLS, with 62 of those coming since 2009 and scores goals regularly from midfield, scoring five in the 2013 campaign.

As creative hub of the always exciting Houston Dynamo, Davis is set to play a key role in MLS this season, and at the age of 32 seems to be in his prime. An expensive but foolproof investment.