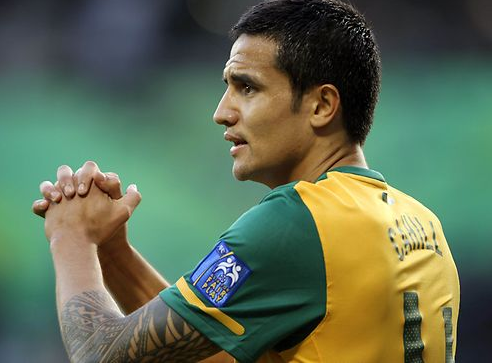 Socceroos star Tim Cahill upset a few people in Australia this week with his comment that a move to the Hyundai A-League would have been a “step backwards” for him after opting to join New York Red Bulls in Major League Soccer.

While some have taken his words to be a slight on the domestic game in Australia, Cahill is merely stating the obvious and MLS is currently a better option for a player in his position.

Major League Soccer came to fruition in 1993 and successfully piggybacked the 1994 World Cup which took place in America. The A-League’s first season was in 2004, more than a decade later, so MLS has a very comfortable head start in that regard.

In terms of quality, the standard of marquee players is currently higher in MLS. The likes of David Beckham, Thierry Henry, Robbie Keane, Alessandro Nesta and, of course, Cahill are, without being disrespectful, a much better calibre of player than the likes of Marcos Flores, Sergio Van Dijk, Fred and Shane Smeltz.

There is nothing wrong with that though, and the A-League will get to that level eventually, but at this stage there is a world of difference between the two groups.

MLS graduates also have a strong history of doing well at European clubs, although not necessarily first time round. Landon Donovan, Brad Friedel, Tim Howard, Clint Dempsey and DeMarcus Beasley all forged solid careers for themselves after cutting their teeth in MLS for a number of years.

The A-League, meanwhile, is currently exporting much younger players such as Mathew Leckie, Mitch Langerak, and now Curtis Good. Matt McKay is an example of a mature player who got a big break off the back his A-League performances but sadly it didn’t work out for him at Rangers.

The news of Mat Ryan’s trial at Tottenham Hotspur is very exciting though and it could be exactly what’s needed to kick start moves for established A-League players rather than just those with raw talent.

MLS has in the past successfully used its homegrown players for marketing purposes in a bid to attract more supporters, aided by the fact that many USA internationals were playing in the domestic league. This is an area in which the A-League is currently lacking, and the Socceroos’ 2010 World Cup squad featured just two home based players (Eugene Galekovic and Jason Culina). The USA squad at World Cup in 2006 had 11 MLS-based players and, with that tournament coming a decade after the inaugural MLS season, it will be interesting to see how many A-League players make the Australian squad for Brazil 2014 (should they qualify of course).

The introduction of the Designated Player Rule in 2007 allowed MLS clubs to bring in ‘superstars’ outside of the salary cap and saw a shift in how the league was marketed.

Say what you want about David Beckham but his move to the LA Galaxy was a massive coup for the league, and was only made possible by the Designated Player Rule. Attendances for Galaxy home and away games increased, while replica shirts sold by their thousands.

We came close to witnessing such fanfare last year when Melbourne Victory signed Harry Kewell, and it is this sort of excitement that will help the league grow. The argument will now be made that if Kewell could come to the A-League then why couldn’t Cahill, and while there is some merit to it, I believe that Cahill still has more to offer in a league that is currently better than our own.

The fact that MLS is in a position to pay transfer fees for players is also a big difference between the leagues which is often overlooked. In Cahill’s situation, he was still contracted with Everton and the Red Bulls had to pay a reported £1 million to secure his services. Australian clubs are simply not in the position to do the same and are forced to rely on free transfers, or goodwill in the case of Brett Emerton who negotiated an early release from his Blackburn Rovers contract to join Sydeny FC last year.

Not everything in MLS is rosey though, and they have had their fair share of Gold Coast United-like expansion failures, particularly in the early days when the Tampa Bay Mutiny and Miami Fusion were wound up due to poor attendances.

However the most recent additions to the league, including the three teams from Canada, have been a success thus far and look very much like being in it for the long haul.

The Seattle Sounders have been forced to increase the capacity of CenturyLink Field regularly since joining the league in 2009, with the stadium now taking up to 38,500 spectators for a home game.

The Portland Timbers also entered MLS that year and they sell out their Jeld-Wen Field for home games, with season tickets long gone in advance of the next campaign.

Some of the more established teams, like Chicago Fire for example, were able to construct a soccer-specific stadium off the back of their success. Their Toyota Park ground at Bridgeview is a world away from their old home at Soldier Field and has been a key factor in helping the club establish its own identity in a sports mad city.

Thankfully, we have now AAMI Park which is exactly the sort of venue needed to hold professional soccer in Australia.

Of course there is the obvious caveat in all this with America having a far greater population than Australia, and that cannot be ignored, but with the 2011 season seeing the highest average attendance across all teams in MLS history (17,872) they are successfully increasing interest in the game.

Thankfully the A-League is improving in this area too, with the 10,487 the average attendance for the 2011/12 season, up from 8393 the campaign before.

Ultimately, MLS has learnt from its mistakes throughout the years and built an excellent league. It is something that the A-League and its supporters should aspire to and to be currently lagging behind it is no disgrace, especially when the starting points for both came ten years after each other.

This article first appeared on The Football Sack.