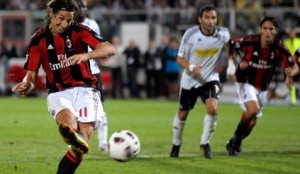 If Inter’s rare failure to register maximum points and Juve’s loss in Bari stood out as the most anomalous results of Serie A’s opening round, then round two offered even heartier fare for fans of unexpected upsets and plucky underdogs. A series of seismic shocks have served to seriously destabilise the early stages of the Big Four’s respective campaigns. And this week it was the turn of last season’s 2nd and 3rd-placed teams to come a-cropper.

As Cagliari boss Pierpaolo Bisoli masterminded a remarkable 5-1 thumping of ten-man title-hopefuls Roma on Saturday night, his former charges at Cesena were all but matching his impact on the shock-o-meter at a rocking Stadio Dino Manuzzi.

Their first home game in the top-flight since 1991, following back-to-back promotions under tactical maestro Bisoli, saw Cesena host a new-look Milan side replete with expensively-acquired attacking talent. Fanciful talk of a Milanese ‘Fab Four’ (comprising Ibrahimovic, Pato, Ronaldinho and Robinho) was dampened when coach Massimiliano Allegri started his new no.70, signed on a season-long loan from Manchester City, on the bench.

Cesena’s hard-earned point at the Stadio Olimpico against Roma surely indicated they’d be no pushovers. Nonetheless, their illustrious visitors were widely expected to take care of business at the home of the Cavallucci Marini (the Seahorses). Instead the big fishes from Milan were flushed away by a performance of considerable skill and counter-attacking verve.

Allegri’s side played no little part in their own downfall, however, as a lack of tactical coherence and a chronically abysmal debut for Barça-reject Zlatan Ibrahimovic combined to undermine a smooth start to Milan’s new dawn. Both sides employed a 4-3-3 formation, which promised – and duly delivered – a display of open, attacking football. But it was Cesena that made such a set-up pay off, by virtue of the willingness of wide forwards Ezequiel Schelotto (tagged ‘the new Zambrotta’ due to his dashing style and undying work-rate) and Emanuele Giaccherini to contribute to the defensive cause when necessary.

Of Milan’s star-studded three-pronged attack, Ronnie and Ibra are hardly renowned for their selfless back-tracking and on nights like this, in Cesena’s tightly-packed mini-Bombonera-style stadium (a ‘chocolate box’ with stands within spitting distance of the touchline), their attacking contribution was negligible too. The only bright spark for the Rossoneri proved to be third forward Alex Pato, whose early-season form has provided an immaculate response to his frustration at missing out on the World Cup.

As in the ‘new’ Brazil’s electrifying recent defeat of the USA, Pato was a constant thorn in the side of his direct opponent; Cesena’s left-back Yuto Nagatomo. In fact, either side of the break, the 21-year-old forward had apparently legitimate ‘goals’ ruled out – one for a debatable offside; the second for a non-existent handball in the build-up. But all of the boy from Pato Branco’s efforts were laid to waste by the profligacy in possession of Ibrahimovic (whose misplaced-flicks-and-tricks-count ran well into double figures) and Ronaldinho’s near-static display. Ronnie’s withdrawal in favour of Robinho early in the second half did little to improve Milan’s fortunes, but did at least produce the staggering sight of the ex-Manchester City star making a last-ditch block in his own 6-yard area. That was to be his only significant contribution of the night.

Cesena had already seized upon Milan’s all-too-apparent frailties at the other end, and, by half-time, were two goals to the good. The first came as Milan’s new centre-half Sokratis Papastathopoulos lost sight of Cesena target-man Erjon Bogdani in the box and the bustling Albanian flicked in a superbly-executed header, with the ever-elusive Giaccherini having featured prominently in the build-up. Then Giaccherini pounced again to notch a shock second following a rapid and incisive counter-attack.

It is the ability of promising talent such as Buenos Aires-born Azzurini star Schelotto and Giaccherini – a speedy right-footer with the ability to create havoc by cutting in from the left-wing – allied to the experience of Serie A veterans Francesco Antonioli and former Ghana captain Stephen Appiah that offers such hope for Cesena this year. With Marco Parolo and Giuseppe Colucci tireless in the engine room, second-half signs of Appiah’s ring-rust following more than two years out of regular first-team action were comfortably covered for. Bogdani will do well to reach double figures, as he is far from a natural goal-scorer, but he offers an exacting presence up front. On the early evidence, highly-rated coach Massimo Ficcadenti has the recipe for survival in a highly-competitive league.

Milan sensed a chink in the armour of rivals Inter; when Jose Mourinho departed an era seemed to be ending. Their ambitious transfer-window trading looked to close the gap, but perhaps has muddled matters further. Vice President Adriano Galliani looked on from the stands ashen-faced as his expensively-assembled team were humbled by a side that languished in Serie C1 just two years ago.

The seal was put on an abject showing when Ibrahimovic pinged a late penalty, earned by sub Pippo Inzaghi, against Antonioli’s left-hand post. The only small crumb of consolation for Galliani and his boss Silvio Berlusconi was that Allegri’s men were not the only pre-season favourite to fail in round two.

Big-spending Genoa collapsed at home to the Flying Donkeys that perennially punch above their weight, Chievo. Palermo, who so narrowly missed out on Champions League football this term were trumped 2-3 by promoted Brescia, and Fiorentina lost away at little Lecce. Early days, of course, but Serie A seems to have taken on an unpredictable feel this season. The upcoming players’ strike is the only black cloud looming on the horizon as the new season starts to take an intriguing shape.

2 thoughts on “Milan choke on Ficcadenti’s recipe for survival”