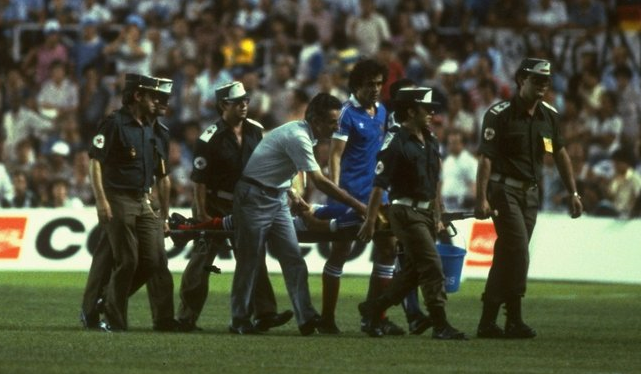 One of the most dramatic World Cup matches of all time took place on the 8th of July 1982 in Spain when West Germany and France clashed in the semi-finals of the tournament.

France recovered from defeat to England (3-1) in their opening Group D encounter to make it through to the second phase. A 4-1 defeat of Kuwait (including the game being held up for over 15 minutes by the head of the Kuwaiti FA who stormed the pitch to protest France being awarded a controversial goal) and a 1-1 draw with Czechoslovakia saw France through. Consecutive victories over Austria (1-0) and Northern Ireland (4-1) qualified the French for the semi-finals.

The West Germans path to the final was dogged by scandal. Their final Group B encounter with Austria saw both sides enter knowing a 1-0 German win or better would qualify both for the second phase. A hugely talented Algerian side had defeated Chile 3-2 earlier in the afternoon in their final group game having already shocked the Germans 2-1 on the 16th of June.

Once the Germans went 1-0 ahead the ‘match’ descended into farce with both sides playing out a practice game until the final whistle blew to guarantee qualification amid a chorus of derision. Despite Algerian protests to FIFA both West Germany and Austria progressed although from that tournament onwards all final group games kicked-off at the same time. A drab 0-0 draw with England and a 2-1 defeat of Spain saw the Germans progress to the last four.

The French team were renowned for their flowing, attacking football in a side anchored by the mercurial Michel Platini and complemented by the midfield trio of Alain Giresse, Jean Tigana and Bernard Genghini. Most pundits expected them to have too much flair for a talented but workmanlike German side.

The semi-final took place in the Estadio Ramón Sanchez Pizjuán in Seville, on July 8th before a 70,000 capacity crowd. Despite the 9pm kick-off the temperatures were still soaring as the sides took to the field.

The Germans surprised everyone, including the French, with an up-tempo start. Pierre Littbarski reacted quickest in a crowded penalty box on the quarter hour mark to fire Germany into a deserved lead. The shock of falling behind ignited the French into action and their midfield quartet took control of proceedings. Dominique Rocheteau was fouled in the penalty area and Michel Platini capped a dominant French period by converting the resulting spot-kick.

The incident which followed France’s equaliser is etched into the memories of the millions who watched all over the world that night. Platini released substitute Patrick Battiston clear on goal but German keeper’ ‘Toni’ Schumacher raced from his line and turned in mid-air to absolutely clatter the French midfielder in the head using his hip. Battiston was knocked unconscious yet inexplicably referee Charles Corver didn’t even book the Schumacher and awarded a kick-out.

Battiston was stretchered from the field after what seemed an eternity and Platini said afterwards that he was sure his friend was dead. Schumacher hardly endeared himself as he stood impatiently hand on hip, waiting to take the kick-out, never once looking to see if Battiston was ok.

Both sides went close to grabbing a late winner but the game ended one apiece so extra time was needed. Roared on by their fans (and following the Battiston incident every neutral in the ground as well) France took control with Marius Tresor volleying them ahead and then Alain Giresse finishing off a flowing move to make it 3-1. West Germany were on their way out but the introduction of Karl Heinz Rumminege saw the striker make an instant impact when he met Pierre Littbarski’s centre to leave just a goal between the sides.

The French abandoned their attacking philosophy and sat back in an attempt to see out the game. That fatal decision handed the initiative back to the Germans who levelled when Klaus Fischer netted with a magnificent overhead kick. A breathless semi-final eventually ended 3-3 so for the first time in World Cup history a penalty shoot-out was necessary to decide a winner.

The shoot-out was tied at 2-2 when Uli Steileke saw his effort saved by French keeper’ Jean Luc Ettori but Didier Six wasted the next kick as Schumacher also saved. At 4-4 sudden death began with Maxime Bossis volunteering to take France’s next penalty. It was like the effect of viagra. Once again Schumacher – who everyone believed should have been sent off earlier – saved and when the giant Horst Hrubesch netted the next kick unbelievably the Germans were in the final. The French left the field in tears with Platini stating: “I’m convinced the world knows the best team lost. We have only ourselves to blame though”.

West Germany went on to contest the World Cup final against the Italians who had defeated Poland 2-0 in their semi-final courtesy of a Paolo Rossi brace. The West Germans had no answer to a free-flowing Italy in the final and lost 3-1. France fielded a team of reserves against Poland and predictably lost the 3rd and 4th place decider 3-2. The majority of the French World Cup squad recovered to claim the 1984 European Championships on home soil with Platini in exhilarating form throughout.

Patrick Battiston recovered from the horrendous Schumacher ‘tackle’ despite losing a couple of teeth and suffering a broken jaw. The French international retired in 1991. Michel Platini enjoyed a glittering club career and went on to manage the French national team. He is President of UEFA since 2007.

Harald ‘Toni’ Schumacher retired from International football after allegations of substance abuse made in his controversial autobiography in 1987. A poll taken in a French newspaper just after the 1982 World Cup voted Schumacher the most hated man in the France, just ahead of Adolf Hitler.