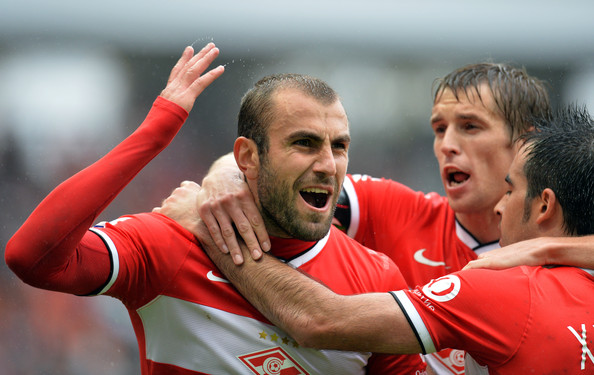 If there is a club in Russia that a new follower would avoid supporting, it is inevitably Spartak Moscow, also known as “Meat”.

In a way, it is unfair as they’re a club like any other, dodgy history, rabid fans and very well balanced with chips on both shoulders. According to their own telling of history they are the “rebel” club. They were not aligned (overtly) with any organs of the state as CSKA, Lokomotiv or Dinamo clubs were, though they’re about as much a club of the people as their Manchester United or Barcelona. Behind each is a hard-bitten commercial drive that makes them the presence they are, though with Spartak it’s a little less transparent than the other two.

And now they’re in even more of a mess than they were last season, or the season before, or the one before that. In fact, it’s just the same old tune that’s been played since the collapse of the USSR and the ability of players to choose who they wish to play for. Coupled with the less than sufficient production line from the youth section, continuous club infighting, lack of direction and biding time to move to the Fedun Palace in North Moscow, the club would appear to have imploded yet again.

An impressive start to the season was built on a foundation of splashing cash, getting rid of players who didn’t agree with the coaching direction of the club and the lack of progress of other clubs when play began. Leaping to the top of the table Spartak, led again by Valery Karpin, were winning but showing real inconsistency in doing so. There was no bite in the team and the inability to attract a dominant midfield workhorse was soon to bite. On-field, racking up of points kept fans happy; off-field the club continued to be shunned by more reputable potential sponsors due to the behaviour of those same fans and also the teeth-sucking, grimace inducing events with club operations. And then it happened.

The fortunate win over Krilya Sovetov Samara didn’t register with the club as to their major deficits and the big win over Dinamo made sensible people even more blinded. So a lucky 2-2 draw in Krasnodar with Kuban should have signalled changes. It didn’t – a 0-0 bore draw later with Rubin Kazan and suddenly the terraces were erupting with calls for the coach to go, for players to leave and for hate-figure Artyom Dzuba to be called back from his southern exile in Rostov. When the club got a 1-1 away to St. Gallen in Europa League qualifiers suddenly everyone was positive again. An away goal, a draw and the arrogance resurfaced. Until they went down 2-1 to an average Amkar Perm side in the Urals.

Down to 4th in the table and without a win in four matches, they faced a mediocre Swiss side at home and somehow managed to squander an early lead to lose 4-2. As ever, the home fans turned quickly and began supporting the visitors. Of course these are the same “fans” who profess undying love for their side, though if anything can be for certain in Russia, it’s that you can’t be certain of anything.

Once the club were out, the latest battle in the war began and from within the club a sneaky word went out that Roberto Mancini was being lined up to come in. While the Italian would certainly pull off wearing a red and white scarf over his stylish long coat, if anyone is more unsuited to taking the reins at Russia’s most dysfunctional club, it is he. Until the owner, Leonid Fedun, steps back and allows the head coach freedom to work, and the current coach steps back up to the GM spot and does the same, the other weights dragging the club down will not be addressed.

And yet it seems that the hunger will grow with another splurge, this time on Stuttgart’s Serdar Tasci, to juggle expectations and limitations.

Assembling, what on paper is, one of the best if unbalanced sides in the Premier League has been a good effort from the club this Summer. Going out of Europe early is also a good thing as they can concentrate on the League. And this is going to be needed as Dinamo received a dose of temporary PEDs (performance enhancing debt’s) from VVP’s buddy and fellow ex-KGB Boris Rotenberg, not to mention the return from inaction of Papa’s favourite boy (also Boris) to the Dinamo ranks. While many giggle at the return of the unfortunately under-equipped Boris Jr, Dinamo have gulped up the misfits from Anzhi and could be serious contenders, until Papa Boris loses interest in a couple of years.

CSKA are back top of the league, Lokomotiv sit in 2nd after exposing Rostov, so the Red and White fans sharing the Lokomotiv stadium have every right to begin to worry. On forums and in general discussion the fans are questioning Valery Karpin’s motives for staying in charge along with his supposed “puppet” GM Roman Ashkabadze. While the former question can have merit, the second falls into the realm of jealousy and begrudgery.

The 30-year-old worked his way up from an interpreter role at a now defunct club to entering the Spartak system and was trusted the whole way until being thrust into the thankless task he now has. While he has some personality traits that do not endear and a lack of professional experience, even Gandhi would struggle to satisfy the demands upon him. Yet he is the current scapegoat alongside the head coach. Unless something radical, innovative and intelligent happens at the top in Spartak, their long wait for a trophy will extend by another year.

2 thoughts on “Meat-balls in a stew: Spartak Moscow’s hunger grows”