On the basis of it, when you put the phrases “Marseille vs. Caen” and “game of the season” together, you usually have to insert something that illustrates how unlikely a pairing the two would make from the outside looking in. Caen, one of the clubs to be promoted from last season (Brendán wrote a great piece on this very website about Caen if you want to get to know them more) isn’t one of the teams you would think of when you think an instant classic.

But when you dig deeper, it’s actually more shocking that Caen aren’t more regularly featured in these type of matches. Caen are 4th in the league in goals scored at 42 and are tied with Toulouse for the third most goals conceded at 40. They’re tied for 5th in shots per game and have the third most shots in open play. Caen also concede the most shots per game, and have the worst pseudo expected goal defense in Ligue 1 this season. Combine that with a Marseille attack that, dormant or not, still possess very high end attacking talent and you have the makings of something special.

However even the most optimistic of Ligue 1 fans couldn’t have expected what the two sides produced last night. Ligue 1 on the whole has declined significantly in the last 5-10 years and for the good things it still possess (namely their insane ability to churn out quality players from their academies) goal scoring on the whole isn’t one. In the top European leagues, Ligue 1 has the least amount of goals scored per game.

Which makes games like the one we saw between these two clubs even more special. This was a true barnburner, where defense was a complete disregard for both sides. Marseille love to create little intricate one-two combinations that split apart defense in their 4-2-3-1 formation. But Marseille added the twist of having the formation become a near 4-6-0 to increase their attacking strength. Andre Ayew played as a holding midfielder with Imbula as his double pivot partner. Usually it’s Alaixys Romao partnered with Imbula to give Marseille some semblance of a defensive solidarity.

It was a very risky proposition, but considering Marseille’s recent inability to create high grade chances, it was worth a shot defensive risks aside. It worked offensively. Marseille had 21 shots , nine on target. Those were the type of numbers the club produced when they were on their scoring tear earlier in the season. The first half in particular was a dominant attacking display from Marseille. They set up camp in Caen’s own end for the majority of the time and picked apart their defense when they had the ball. The tempo to their passing was crisp and purposeful, something that they haven’t showed in weeks.

But the problem was once Marseille gave up possession, it was a code red. It’s great to be able to hem in your opposition when you have 68-70% of the possession, but when you’re facing a energetic 4-1-4-1 formation with no traditional CDM, you leave yourself in a world of hurt when you lose the ball: 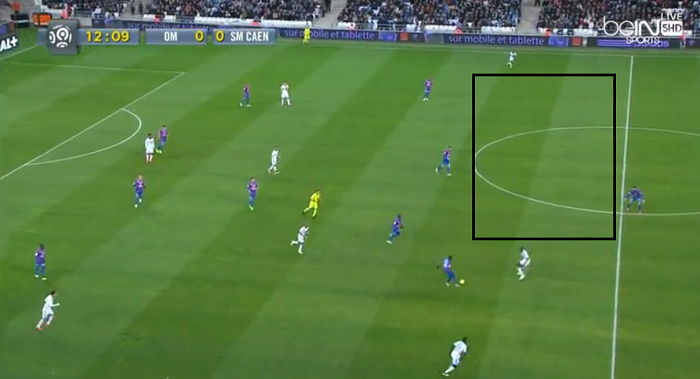 Caen have attempted the most shots from the counter this season in Ligue 1, and the middle was open time and time and time again for them to take advantage of. It was actually quite stunning to see this and Marcelo Bielsa never tried to adjust for this. Considering how much he’s tinkered with formations this season, it just leaves one scratching their head.

In fairness to Marseille, the ability to turn a change in possession into a ruthless counter attack is a skill that deserves praising. N’Golo Kante and Nicolas Seube were magnificent as the heart of the central midfield for Caen and again the ability to win the ball back over and over again by Caen combined with Marseille’s inept defensive structure allowed them to create whatever they wanted.

This hasn’t been a new thing with Marseille. The backline of Jeremy Morel and Rod Fanni doesn’t breed the most trustworthy of partnerships, but even the best of the best CB’s would’ve had their hands full covering the mistakes made from Marseille’s point of view. Brice Dja Djedje and Benjamin Mendy come as close to being wingbacks as a traditional fullback can be, and the deployment of both of those fullbacks was especially consequential considering the lack of protection Marseille had down the middle. Just look how far up Dja Djedje and Mendy were when Kante intercepted this pass from Dimitri Payet: 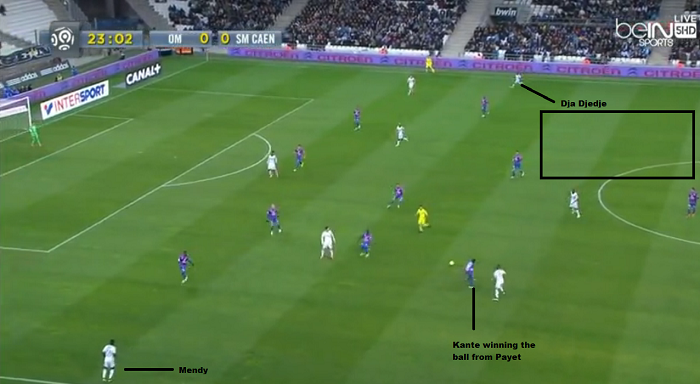 The domino effects of having no presence down the middle + fullbacks playing as wingbacks is trying on a defense. The same thing happened on the second Caen goal from Emiliano Sala: 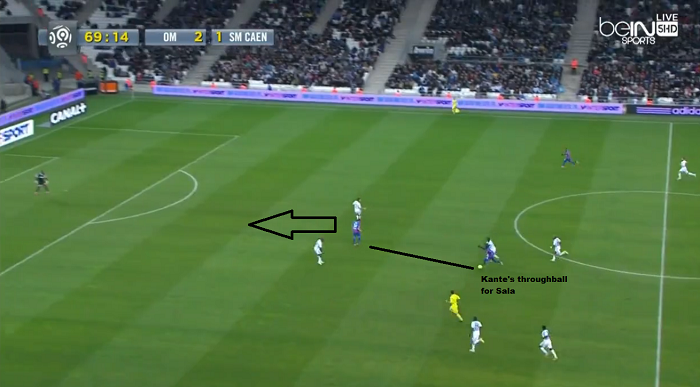 I mean, what can you really do when you have no support from any of your teammates. You just pray and hope the opposition messes up the chances afforded to them on a silver platter. Unfortunately for Marseille, Caen were clinical enough on the counter to put their chances away.

The best games, 80-90% of the time, happen because one, or in this case both, of the teams playing commit errors that lead to countless scoring chances. Ligue 1 doesn’t lend itself to this in comparison to other league because teams in France on the whole are much more cautious and are perfectly content with playing for a 0-0. Even teams as good as PSG will kill games monopolizing possession when up a goal or two to risk any defensive errors.

But once in a while, you’ll have this sort of game that runs contrary to the ethos that Ligue 1 bases itself on. Marseille and Caen played the game of the season so far, in no small part to Marcelo Bielsa’s audacious (to say the least) lineup selection.

It was really sad that the game had to be ended, because it was the type of match you wish could last for weeks on end.

One thought on “Marseille, Caen and Ligue 1’s game of the season”