Ligue 1 more or less has a bad rap when it comes to their star-studded games. The hype built up in the French media (and the trickling attention that goes to the rest of the world) and the pageantry that comes with the big matches in France more or less end up with draws and very cautious play.

Look no further to the two games involving PSG/Lyon or even the first encounter between Marseille and Lyon. The hype didn’t come close to the final product. 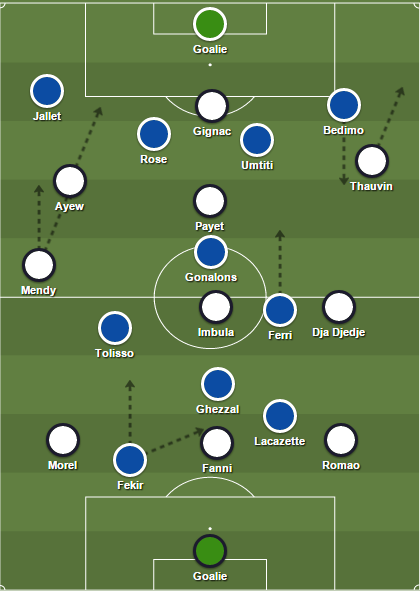 The formation setup for the clubs and the squad selections were interesting.

With the injury that Yoann Gourcuff picked up versus Montpellier, Hubert Fournier had his Lyon set up in the customary 4-4-2 diamond formation but instead slotted Rachid Ghezzal in the #10 hole behind Nabil Fekir and Alexandre Lacazette.

The move itself was questionable but displayed a sense of cautiousness at the same time.

Ghezzal has been a peripheral player in Lyon’s squad this season and giving him the start over Clinton N’Jie was perhaps a sign of Lyon being content with a draw at the end.

It even prompted Lyon to switch Ghezzal for N’Jie near halftime, which made Lyon play at times in a hybrid 4-3-3 attack

From the start, Marseille made their intentions clear, that they would press very high up on the pitch and attack Lyon’s right hand side.

With the very fluid 3-3-3-1 formation put forth by Bielsa, Olympic Marseille were on the front foot for the first few minutes as they tried to take the game onto Lyon.

Andre-Pierre Gignac in the beginning of the match was very lively as well, hounding the Lyon center backs as the head of the Marseille snake.

Bielsa gave Benjamin Mendy free reign to fly down the left hand flank and cause Lyon troubles, as evidence from the data presented by WhoScored.

The work rate of Dimitri Payet was very impressive, particularly since the middle of the park could’ve been very susceptive for Marseille against Lyon. His ability to turn and create quick counter opportunities was also exemplary.

Lyon to their credit did well to cope with the pressure, and exploited Marseille RB Bryce Dja Djedje’s positioning in the beginning minutes of the match.

This also coincided with Ghezzal’s best moments in the match: the failed throughball to Henri Bedimo in the sixth minute and the Lacazette chance a minute later:

It was interesting to see how the use of Henri Bedimo on the left hand side for Lyon didn’t change despite the formation shift from Bielsa: it was to bomb forward despite Dja Djedje and Florian Thauvin occupying that side of the field.

It was a calculated gamble from Lyon and it worked, mostly because Thauvin and Dja Djedje weren’t influential in the match.

The rest of the first half was more or less Marseille still pressing up the field with Gignac probing, playing long balls either diagonally or into the penalty area and Lyon sucking up the pressure while trying to hit long balls to Fekir/Lacazette.

With the substitution of Ghezzal for N’Jie we saw a more attack minded Lyon in the second half that tried to take advantage of the high line put forth by Marseille, both in open play and during dead ball situations.

The marginal offside call on N’Jie, Lacazette’s missed header in close. Marseille countered with continued insistence on getting into the wide areas and crossing the ball, whether outside or inside the box.

No clear-cut chances came from this, until the 70th minute when Gignac nearly put Marseille on top via a failed attempt at a header by Samuel Umtiti near midfield.

It illustrated both the best and worst parts of Gignac’s game. The ability to hold the left footed Bedimo off on the right hand side as he got the shot away in full speed is a skill that not a lot of strikers his size have.

The coordination to not trip over or take a bad touch while sprinting forward before hitting the post was notable. But Gignac wouldn’t be someone you’d mistaken for someone who has that extra bit of pace in his legs, which played a part in not being able to run more centrally.

Of course no write-up about the match would be complete without having an opinion on the goal not given to Lucas Ocampos or the red card by Jeremy Morel.

The Morel red card in real-time looked really bad and though he does get a little bit of the ball looking back on replay, it’s the type of aggressive tackle in the modern game with the trailing leg hitting the opponent that can and has been booked for a red card.

It’s never a good idea to make comparisons to previous mistakes by referees, but there have been much shadier red cards given this season in Ligue 1 for incidents that didn’t even warrant a yellow card.

But the main storyline is the goal that never was called a goal. It was the biggest moment in the match, the one that essentially sealed both fates.

Marseille fans whether in the crowd or on Twitter were furious that Ocampos was denied a goal by the referee and the linesman on the play. Asking the referee to call a goal when the ball is very much hidden in live play from the distance he is from goal is borderline insane.

It makes it even more baffling when one considers that some of the video replays shown couldn’t definitively tell you if the ball fully crossed the line. Here’s one for example 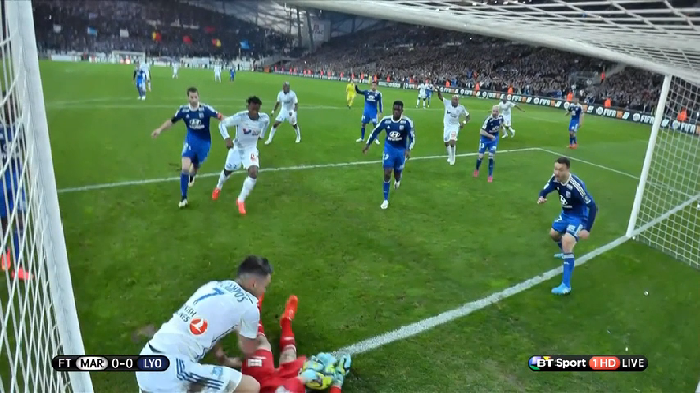 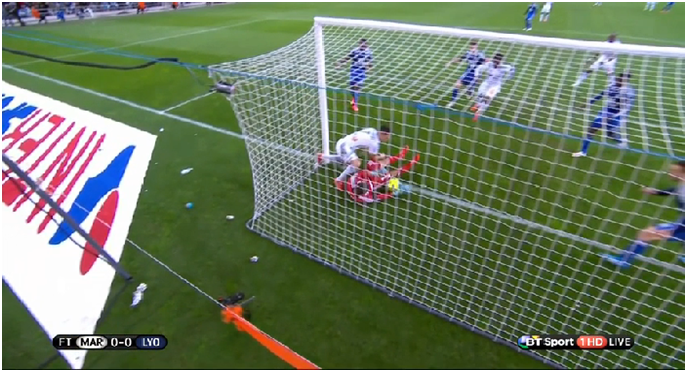 Do I personally think the ball went in? Kind of? I mean, there was one angle that showed the ball using this weird backspin that had essentially all of the ball crossing the line.

But it’s an educated guess, and the ref is well within his rights to not call a goal if he doesn’t think the ball fully went past the line, especially factoring in how far behind the play he was and the angle he was at.

This incident will in all likelihood rekindle the debate for goal line technology. Joey Barton was on BT sports for the match and he talked about how unlikely it’d be that Ligue 1 will see video replay, talking about his time with Marseille and how clubs were already paying a lot just to put on matches.

The cost of it was the reason why it’s not being implemented in the Bundesliga currently and is only being used in the English Premier League (though Serie A will start using it next season).

Putting the incident aside, Lyon will be satisfied with the draw away from home especially with this being the final match they’ll have to play this season against PSG/Marseille/Monaco.

The counter attack based ideology met up against the high pressing, possession laden Marseille and the 0-0 result on the whole was probably the fair result. It was very much similar to how Lyon lined up against PSG back in September.

Marseille are still clinging on in the title race but now only have nine games to make up the four point deficit on Lyon and pass PSG who are two points ahead, making the home match versus PSG on April 5th a must win.

In perhaps the biggest match Lyon has had since the Champions League loss to Bayern Munich in 2010, they’ve passed another test for a squad built primarily around their famous youth academy.

Ligue 1 can lay claim to having the most competitive title race in the Big-5 European leagues, and for once their star-studded tilt didn’t disappoint.