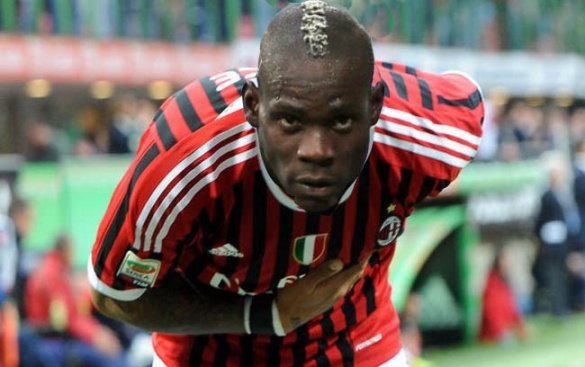 After two and a half rather forgettable seasons at Manchester City, the ever-controversial Mario Balotelli has recently been linked with a return to the Barclays Premier League, in the form of a rumoured £40,000,000 deal to Arsenal. However, is Mario Balotelli ready for the Premier League, but more importantly, is the Premier League ready for Mario Balotelli…again? Super Mario by no means had the easiest childhood, which could be one of the reasons for his obscene behaviour. Born in August 1990 to Ghanaian parents, at the age of three he was put into foster care and was then raised by the Balotelli, a Jewish-Italian family in Brescia. He had a failed trial at Barcelona at age 15, before signing for Inter Milan. At 17, he broke into the first team and formed a bright relationship with manager Roberto Mancini. However, once Mancini left for Manchester City, his disciplinary record plummeted. Offenses including minor fights, public support for AC Milan and lack of effort, resulted in the remainder of Balo’s stay at Milan a rather turbulent affair. In the summer of 2010, he linked up with former manager Roberto Mancini again, and joined Manchester City, with a £20,000,000 price tag. The move was by no means boring however with a three-year stay that included controversy, fireworks, fights and some superb football, all culminated in the assist that lead to City winning their first Premier League title and a brawl with manager Roberto Mancini. This marked the end of Mario’s Manchester stay, and a transfer to AC Milan in the January of 2013. However, Balotelli was evidently moved by the support and care he received from the Manchester City faithful and Mancini alike:

I will remember my brilliant team-mates, the manager and all the supporters. They are the best, they were great with me and I will always have a very special place in my heart for City, it’s a great club with a great future. I spoke with Roberto before I went to speak to the players. We spoke for some time about lots of things. He was sad, and I was too. But it was a good conversation. I love Roberto, he has been very important for my career, and I will always thank him for having trust and faith in me

Once he arrived at Milan, he has somewhat matured and the only offenses to date have been on-the-field temporary lapses of judgement. As well as this, he has played the best football of his whole career, scoring 21 times in just 29 appearances. He has been in sublime form for Milan and has attracted the interest of Arsenal. However, would he be a good fit for the team? Arsene Wenger is one of the older and more experienced managers in the Premier League and notoriously signs players who will be “easy to manage” and will be uncontroversial. Even if Balotelli has matured, he is by no means controversy-free and will prove to be hard to keep focused and 100% committed, a mould Mario does not fit. However, even with these problems, he would provide pace, power and goals for an Arsenal side, who have lacked that ever since Thierry Henry left. He would undoubtedly score goals, but would also be a handful for Wenger. The signing of Balotelli would be a chance for Wenger to prove to all his doubters, he is not afraid to take risks, if he can reap the benefits. With all the creative talent Arsenal have, it would give Balotelli the chance to score more goals than ever before, and to prove to the world he is all grown up. Balotelli could emulate the likes of Thierry Henry, Dennis Bergkamp and Ian Wright is he so wished. He could go down in Arsenal folklore, and have songs sung in his honour for years to come. He could be a cult hero and become one of the greatest players of all time, if he so wished. If Arsenal can afford him, then I believe the risk is worth taking. Throughout his career, if you forget the controversy and immaturity, Mario Balotelli has proved to the world he is a special player, a world beater; and I believe he is a risk worth taking. He could be the missing piece to Arsenal’s title-challenging jigsaw, or a shot fired wide. I believe the Premier League is ready for Mario Balotelli, but is Mario Balotelli ready for the Premier League?