He’s came. He’s saw. He’s in prime to position to conquer. The idiosyncratic Argentine Marcelo Bielsa has guided his Marseille side to the top of the tree midway through the Ligue 1 season. And boy has he done it in style.

After picking up a solitary point from their opening two league fixtures, fortunes have changed dramatically in the south of France. Marcelo Bielsa has introduced a brand of scintillating attacking football, yet simultaneously maintained a resolute defensive style, catching the eyes of millions around the globe.

As it stands, Marseille sit second only to Lyon in goals scored (38) – averaging two goals per-match – and top the table in attempts (308).

But how exactly has Bielsa’s methods made the dismal seventh place finish of last season a mere memory?

‘El Loco’ is widely-recognised for the work-rate he receives from his players, ensuring he receives the absolute maximum out of every individual. Without the ball, Bielsa’s sides press tirelessly, aiming to win the ball back as high up the pitch as possible. With the ball, Bielsa’s sides aim to break fast, playing vertically in the hope of creating numerical advantages in the final-third of the field.

So far, Bielsa has utilised both the 4-2-3-1 and 3-3-3-1 this season. He leans towards the three-at-the-back system whenever he encounters an opponent using two upfront – creating a ‘free’ defender – whilst the four at the back system is put into effective against lone striker systems.

Rather than aimless, incoherent pressing, though, Marseille press in patterns. Perhaps Dimitri Payet’s goal against Saint-Etienne earlier in the season perfectly illustrates such. 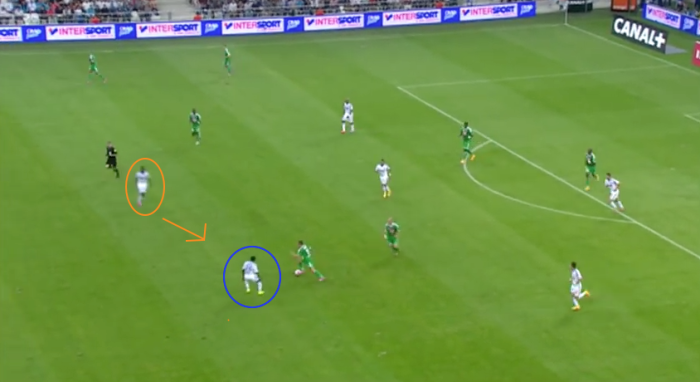 St-Etienne goalkeeper Stephane Ruffier begins the attack by rolling the ball out to Yohan Mollo. As he turns, he is instantly pressurised by Marseille full-back Brice Dja-Djedje (blue), who begins the press. Gianelli Imbula (orange) then rushes over, creating a 2v1. 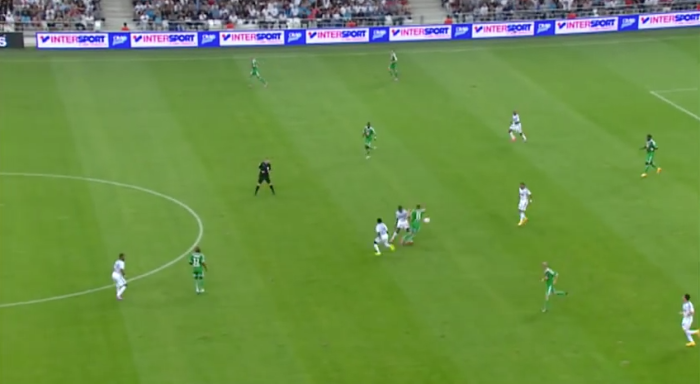 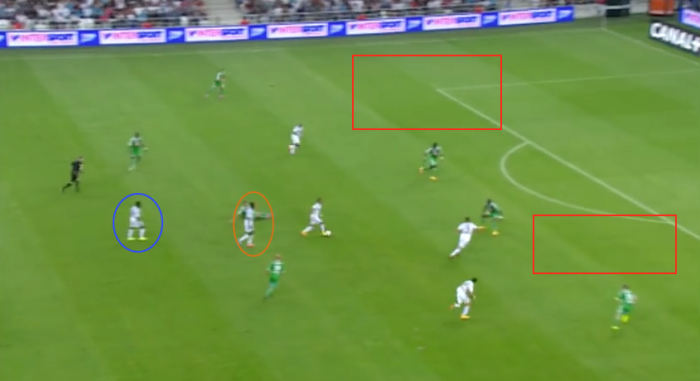 Unsurprisingly, Imbula’s challenge is enough to dispossess Mollo. Dimitri Payet picks up the ball facing goal and is presented with two options. He has Andre-Pierre Gignac to his right and Andre Ayew, with acres of space to run into, on his left.

The playmaker chooses the latter option, and although his eventual pass is over hit, Ayew does incredibly well to win the ball back at the byline, play a lovely cut-back to Payet, who slots it past Ruffier.

And it’s been Dimitri Payet’s resurgence under Marcelo Bielsa that caught the headlines, too. The former Lille midfielder was heavily linked with a move to Premier League side Swansea, with some outlets reporting that Payet had packed his bags and was keen on the move to Wales. The deal broke down, however, and it’s been a blessing in disguise for Marseille, becoming Bielsa’s most valuable player overnight.

The diminutive playmaker has racked up a total of eight assists thus far – double his amount from the previous campaign. Additionally, the French international has registered five goals in 17 starts, including a screamer against Lorient which proved critical in the end.

The way Bielsa has utilised Payet this season has been identical to the way he utilised Iker Muniain during his time at Athletic Bilbao. Payet is tasked with linking-play between Marseille’s two full-backs and wide-men, and, on occasion, is the highest attacker in Marseille’s system when Gignac drifts wide.

Most assists in Europe's top five leagues this season:

More often that not, however, Bielsa encourages his side to attack down the flanks.

Florian Thauvin occupies the right-hand side of the pitch, typically gluing himself to the touchlines. Subsequently, this drags the opposition full-back out wide to cover the Frenchmen, creating space inside for the underlapping run of Brice Dja-Djedje.

On the opposite side, Andre Ayew tends to play drift inside significantly more, linking up with both Payet and the marauding Benjamin Mendy to create numerical advantages on the left-hand side.

At the heart of the team, Giannelli Imbula has more than proved his worth to Marcelo Bielsa. After a vastly disappointing debut season in a Marseille shirt, the French U21 international has bounced back becoming one of the most sought after prospects in Europe under El Loco.

The young midfielder has shown maturity beyond his age this season, becoming an integral part of Bielsa’s system. He’s possesses great composure, strength and skill in possession, instantly drawing the flattering comparison to Patrick Vieira.

Marseille’s second goal against Toulouse earlier in the season encapsulated Imbula – showing immense composure, skill and intelligence in the lead-up to the goal.

Whenever Marseille build from the back, Imbula is frequently the midfielder who carries the ball upfield for Bielsa’s side. In a 4-2-3-1, both full-backs push on, Imbula drops in slightly ahead of both central defenders, creating a 2-3-2-3 formation.

Marseille’s creative midfielder – normally Payet – drops in alongside Mario Lemina; Thauvin and Ayew push on to provide support for Gignac.

However, if you find yourself a faithful admirer of Bielsa, you’ll be accustomed to watching his sides burnout as they head into the latter stages of the season. Although his Athletic Bilbao side vastly overachieved in reaching the finals of both the Copa del Rey and Europa League, his departed Spain trophyless.

He strongly opposes squad rotation, more or less sticking with the same XI throughout the entire season. He’s at civil war with the Marseille board over transfers, and he’s already flexed his muscles by sending player of the season Dimitri Payet on his Christmas holidays early for a lack of effort in training.

If he does conquer France, he’ll go down as one of the greatest managers ever to grace the game. Bielsa has not only revolutionised Marseille as a club, but through his uniquely attractive methods he’s changed the dynamic of Ligue 1 as a whole.

Buckle up, because the second-half of the Ligue 1 season is going to be exhilarating.