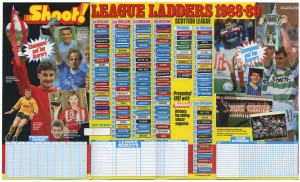 BBC commentator Jonathan Pearce has difficulties with what has or hasn’t crossed the line. During the World Cup he famously became befuddled and bemused by what for rest of us was a fairly straightforward call. The web scoffed. Twitter mocked. Memes multiplied. Goal line technology was simple and that gave us the right to smugly mock a luddite who didn’t get it. I thought about poor Jonathan’s problems again this week as pre-season came creeping. I’ve started to think football obsessives may have a fairly big blind spot about what crosses the line too. Maybe we should have been the first to give Jonathan a break.

Pre-season. The boy inside still mentally unpacks the season planner this time each year, popping the cardboard team markers out and arranging them neatly (alphabetically to begin with of course) on the league ladder. The man I’ve falteringly become has a thousand and one other things on my mind in an average July. The onset of a new season still bullies its way towards the top of the line, telling real world issues they’ll have to wait while I check out Villa’s new away strip.

We grow up fanatical about football but what does a grown up football fan look like? Perhaps it’s someone who uses football to escape from the pressures of adult life. A kind of colourful playground they preserve to counterbalance the often grey routine of the everyday. My guess is football fulfils that kind of role for most fans and all casual observers. If you checked your phone for transfer rumours in the last hour you are in a separate tribe. You, like me are an obsessive. For us the playground fence never went up.

Pre-season is a fairly good time to observe the obsessive. The anticipation of a new season flushes them out. You can make a decent fist at convincing yourself and others that a Champions League knockout game is a legitimate distraction from the more traditionally worthy candidates for your attention (family, friends, fire alarms). The case for cutting a family day out short for the deciding game of the Emirates Cup is more of a challenge. Once you’ve attempted it you shouldn’t need technology or even Jonathan Pearce to tell you if you’ve crossed the line.

In my mind Football is a magical thing where the unimportant and trivial is made vital and almost spiritual through the sheer force of will of those who play and watch it. For 25 years I’ve been part of a global community that submit to collective, willing, powerful illusion. We’re all about to start conjuring it again, summoning drama, narrative, failure and redemption from grass and painted lines.

Or maybe that’s bullshit. Maybe my adult brain has had to work hard to create a hyperbolic justification like that just to hide how childish my excitement is. That’s what this column is going to be about. Can a childhood obsession like football ever really find appropriate adult expression? From the grown fan who pouts or blubs after strangers lose, to the football hipster studying obscure tactical systems are we all just striving to cloak the immaturity behind our passion?

I once dragged my wife around fourteen bars during a power cut in the vain hope of finding a pub with a generator to watch a game. I inched down the side of a mountain in Austria on my arse with a sprained ankle to make a kick off time for a season opener. When I eloped to New York: breakfast at Tiffanys? No, brunch in bleak dive bars to catch routine league games in the company of fellow obsessives.

Was it the football enthusiast that did those things, or the child with the wall planner left inexplicably at the controls? My guess is most reading this can trump those stories in a heartbeat, if so stick with me on this; the purpose is not to burst any bubbles, just to understand what’s in the mixture.

This week I will spend time finding obscure online streams for pre-season games. I will jot down potential line ups. I will cross them out. I will jot them down again. The man in me finds this a bit pathetic. He spends a lot of time in the real world and knows the value of time. He is bringing up two children, holding down a job, working on a relationship, engaging in civic and political life. He sometimes can’t believe he takes time out from all that to compare pass completion stats or find out what Chris Kiwomya is up to these days.

Pre-season. Time to experiment. As the soap operas and form guides take shape I think I’m going to leave it to others to pick apart and analyse the action on the pitch. I’ll be looking at what my army of obsessives get up to off it. The web forum-warriors. The phone-in prophets. Tactics bores and bandwagon whores. Players in a different game. Let’s try to find out what crosses the line between man and ball.