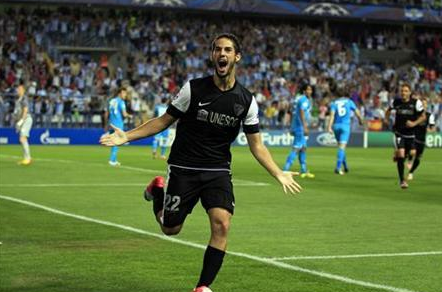 When Sheikh Abdullah Al-Thani became the new owner of Malaga CF in the summer of 2010, I’d imagine he had nights like this in mind – La Rosaleda witnessing a 3-2 victory over the reigning La Liga Champions, Malaga’s first home win against Real Madrid since 1983.

It came just 48 hours after Los Boquerones had been paired with Portuguese Champions, FC Porto in the Last 16 of the UEFA Champions League, in what is their first season in the competition.

Typically though for Malaga there’s a ‘but’ and a very big one at that. Sandwiched in between victory over Real Madrid and Thursday’s draw in Nyon was a UEFA ruling on Friday, that the club is excluded from European competition for at least one season because of unpaid bills.

Malaga were also fined €300,000 (£244,000) and face a further season’s ban unless the club can prove by 31 March 2013 that it has settled outstanding payments to other teams, staff and tax authorities.

A turbulent few days, I think it’s fair to say, at a club which has seen its fair share of drama over the last two-and-a-half years. Even prior to Malaga CF’s sale, Los Boquerones had escaped relegation from La Liga on the final day of the 2009/10 season.

Real Madrid were the visitors that day too, the sides playing out a 1-1 draw that ensured Malaga finished one point above the drop-zone and retained the top-flight status that maintained their attractiveness to potential investors. Indeed, you have to wonder just how different the last couple of years would have been at La Rosaleda had things worked out differently on 16 May 2010?

Star names have come and some of them have then subsequently gone, bold plans have been made but not always come to fruition, yet in amongst all the headlines and confusion one figure in particular has stabilised a club that could so easily have gone the other way this summer.

Manuel Pellegrini was appointed by Malaga CF in November 2010, around four months after being released by Real Madrid. Having achieved a very respectable finish of 11th in 2010/11, the Chilean’s first full season in charge saw the club finish 4th with a record-breaking points haul.

It meant the promised land of the UEFA Champions League was just a play-off away, but even before Pellegrini could begin to plan for that tie against Panathinaikos he was facing headlines of financial problems and subsequent player sales.

Just under €30m was raised from the departures of star-names like Cazorla and Rondon, as rumours persisted that they’d be followed by the likes of Toulalan and Eliseu. But when they stayed and players such as Javier Saviola (free) and Roque Santa Cruz (loan) arrived at the club, the team-spirit fostered by Pellegrini grew further.

It was perhaps emphasised best by the first-leg of that clash with Panathinaikos. All the talk beforehand was how both clubs had the weight of the world on their shoulders due to financial issues. Yet at times that night, Malaga played with the freedom and panache of a team without a care in the world. Good value for their 2-0 win, followed up by a goalless draw in Greece six days later.

A group of players seemingly united rather than divided by the club’s troubles, went on a ten-game unbeaten run at the start of the season before qualifying for the last 16 of the UEFA Champions League with two games to spare. To finish the group stage 4 points ahead of seven-time winners AC Milan, would be an achievement for veterans of the competition, for ‘troubled’ debutants it was nothing short of staggering.

Pellegrini must surely take much of the credit for some outstanding performances that have both surprised and delighted many neutral observers across Europe – football played with passion yet easy on the eye.

It’s inevitably led to admiring glances from across the continent towards the attacking talent of players like Isco and Eliseu, yet veteran defenders Weligton and Demichelis have also played vital roles.

A team in every sense of the word and provided Pellegrini can get to the end of January with his squad in tact; it could yet achieve even more this season. This being Malaga though, you can never quite be sure what to expect.

One thought on “Malaga CF – The story that keeps on giving”