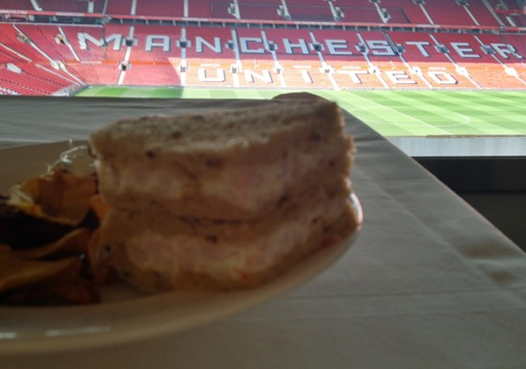 This week major mainstream news outlets reported on a story concerning sound engineers being employed by Manchester united officials. The rhyme and reason of this is seemingly an attempt to boost what is seen as a flaccid atmosphere which exists within the ‘Theatre of Dreams’.

The slant on many of the articles was somewhat tongue in cheek, poking fun at the ludicrous nature of the details; or gleefully dusting off the already well-worn Roy Keane swipe from a decade ago concerning corporate boxes and crustacean filled sandwiches.

But to the trained eye this is evidence. A warning sign. Exhibit #101 in a growing charge sheet. That sheet attests that the controlling powers in English football – the owners, the investors, the broadcasters et al have upped their efforts in their mission not just to own football, but to transform it into their own game.

They want top tier English football to be theirs because it is a profitable enterprise. The most watched sports league in the world. The merchandising and broadcast revenues from worldwide audiences are calculated in figures of billions. And to fully exploit the mineral wealth of international fandom – including the still relatively small US television market- you must make your product as appealing to the international fan.

What marketers have gleaned from Apple’s worldwide popularity is that a product must be all encompassing and all-inclusive. Making it accessible to potential fans from Boston to Bangkok means sterilising the product, stripping it of it local-ness. The heritage and history behind some of the most beloved English football clubs have become impediments to global recognition. An executive for a leading American sports broadcaster once bemoaned the fact that there were too many clubs within each city and that the two Merseyside giants would benefit from merging into ‘Liverpool United’.

A lot of searching for football’s lost soul has placed the blame squarely at the feet of foreign owners. To be honest, I personally think that to tar foreign chairmen as bad chairmen smacks ever so slightly of jingoism. Throughout the history of English football there have been plenty of British chairmen whose actions have damaged football clubs – Ken Bates, Peter Ridsdale etc. While nationality isn’t as major issue, motivation is. And in most cases of Premier League ownership the motivations are not in line with those of the fans.

And if the owners of a club want to do something that the fans are against – take money out of the club to finance their own debt (© The Glazers) or change the crest and colour of a club both of which have existed for over 100 years (© Cardiff city’s Malaysian owner) or even relocate an entire team to a different part of the country (© The Milton Keynes stadium consortium) – the fans will quite often vocally protest against such a decision.

The problem is that such protests, whether they be in the form of banners, scarfs, chanting etc, do much to alienate the wider fan base. All of a sudden an Arsenal fan watching in Japan feels disconnected with his club, because they cannot breathe, smell and touch the passion that the dyed in the wool fans are a part of.

So the course of action owners are taking is to simply eradicate the loyal football fan. And to do so is reasonably simple – you make it too expensive for the core fan base to attend the games.

The popularity of the package you sell then allows you to fill the stadium with one-off ticket holders. Whether it is tour operators, casual fans or tourists who simply come along for the match day experience that was sold to them via the media outlets. And while these fans may be classed as supporters of the club, their preferences lean towards watching ‘their’ team win in an entertaining fashion. The politics behind the 90 minutes mean little to those simply in pursuit of ‘sports entertainment’.

In the third paragraph of this article I used the term ‘warning sign’. This may seem overly dramatic but, put in the context of the changes that have occurred/been imposed on top tier football in recent years, I believe it is a worrying development.

If the story turns out to be true, much like the story from seasons past about Arsenal ‘piping’ crowd noises into the Emirates, it essentially means the core fans that exist at these clubs have already lost. They are surplus to requirements.

This may seem like doom-mongering, but if a change is to come about in the structures that dictate football then it is my opinion that the realities need to be exposed. The German model of football club structure has shown that interaction between a football club and its fans can be a system where both parties benefit. That is what most football fans with common sense want, but how it will be achieved when faced with a league seemingly hell bent of global supremacy?

2 thoughts on “Loud and clear”