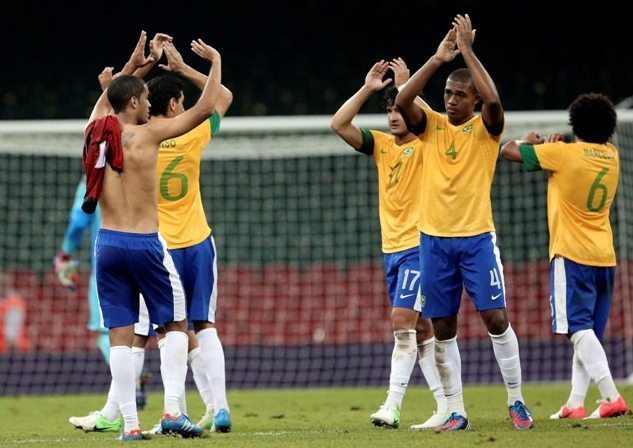 Watching Brazil triumph over Egypt in their opening game of the London 2012 Olympics was almost a religious experience. Sure, the stadium was only half full and they stumbled to victory, but for those of us who were lucky enough to witness the match we saw the beginnings of what could be the team that lifts the World Cup in 2014.

That is not to say that this Olympian team are the finished product, far from it. But by Brazil manager Mano Menezes’ own words, these games are probably the most important Olympic Games of all time for his nation and up to three quarters of his squad will be important members of his Brazil 2014 team.

Speaking to World Soccer Magazine before the tournament he said; “Since I took over I have been going on and on about the importance of the Olympics as a tournament for Brazil, in terms of historical results and as a crucial step for our World Cup plans. Players who are now eligible for London 2012 will form 70 percent of the 2014 squad. These games will be more important than ever for Brazil.”

And when you look at the exciting team he has put together for London 2012 you can easily see that Menezes’ philosophy on football is as far removed from Dunga’s philosophy, his predecessor, as Joss Whedon’s Avengers Assemble is from Christopher Nolan’s The Dark Knight Rises.

The main difference between the two Hollywood blockbusters is that Whedon’s film is blatantly made for the fans. It is packed with fun, excitement, jokes, creativity and characters.

While Nolan’s film, which is arguably better made and better acted throughout, is so mired in the director’s insistence on his vision of the character that he neglects and refuses to use the vast, rich history on offer.

And when he does use this rich tapestry his mishmashed version of the “groundbreaking” “The Dark Knight Returns” and “Knightfall” are so out of kilter and so full of plot holes that he almost ruins his previous great works.

During the last World Cup, the ex-combative midfielder picked a team in his image and was so afraid of creative characters and their influence on his team that he left many out of his squad in favour of a sterile defensive style that his team ended up lacking any kind of character whatsoever, just like The Dark Knight Rises.

Mano Menezes is fully aware of the critical backlash that Dunga suffered after Brazil’s elimination from the 2010 World Cup so he has set about building a team full of attacking and creative intent, just like Avengers Assemble.

Take Neymar and Pato, for example. Before the last World Cup, their cause was championed by none other than Pele. You could make the case that they were too young at 17 and 20, respectively, but a blind man could have told you how special these players are and that they would be important players as far as 2014 was concerned.

For this tournament Menezes, has basically used a free flowing 4-5-1 with Neymar and Oscar, at times, hugging the touchlines before coming inside and Leandro Damiao up front in the centre forward position as Hulk, somewhat surprisingly, drops deep.

Rafael and Marcelo are the two full backs either side of the impressive Thiago Silva and the susceptible Juan Jesus. It is highly interesting that Menezes chose Jesus over the likes of David Luiz, who could have played under the over-23 rule, because even now it looks like Jesus might not make the 2014 squad.

In the middle the craft, guile and intelligence is expected to come from Tottenham Hotspur’s Sandro and one of the rising stars of Brazilian football, Ganso.

If they can click, they will be devastating. Just as they were against Team GB and in the first half against Egypt.

Aside from the obvious lean towards a highly creative and fast moving team, the one other major factor to consider about this Brazil team is the pressure they are under.

Menezes has quite cleverly heaped massive pressure on his team’s young shoulders as far as winning this tournament is concerned and in practically every press conference so far, he has mentioned the fact that this (the Olympics) is the one football tournament Brazil have never won.

This reason that this ploy is clever is that when 2014 rolls around the weight of expectation, attention and pressure on Brazil’s team will be almost unbearable so Menezes is using this competition to ready his players for the kind of pressure they will have to expect in two years’ time.

And just like the Avengers, this team will have to learn how to get on with each other in pressurized situations if they are to triumph in the face of probable defeat.

While we’re talking superheroes, the parallels with this Brazilian Olympic team run even further!

When you have time, take a flick through Brazil’s Olympic Squad. There you will find a squad packed with comic-book characters.

The point being that while Brazil’s first half display was full of flair and while the second half was full of nervous tension, Mano Menezes is not afraid to wear his philosophy on his sleeve and play characters who believe in attacking football.

If this team are to grow into potential champions in 2014, they will have learned more from the mistakes they made in the second half than from the wonderful free flowing football they put together in the first half.

As with any team or player, they will learn from experience.

From here it would appear as if their manager has because while this Olympic team lacks any player who excels in the “dark arts” of the game it does possess a number of Marvels.

And just like Phil Sheldon, we just may have witnessed the future.

One thought on “London 2012: Brazil don’t need any Dark Knights; They have plenty of Marvels”