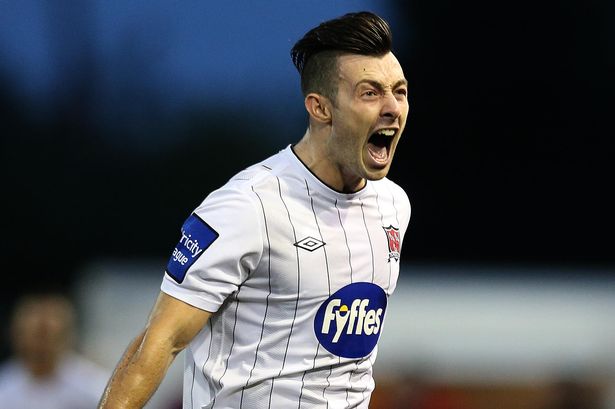 My most recent article on Back Page Football focused on the image problem that besets the League of Ireland and highlighted a few easily-fixable problems that could remedy the problem.

One issue I didn’t bring up – and perhaps the most important – was the issue of how the League markets itself on the field.

While I stand behind my judgement that were anyone to attend a League of Ireland game, the action on the pitch would speak for itself, on the rare opportunity that teams have appeared in televised games, they haven’t really done themselves justice.

RTE’s first two televised games of the season – Derry City away at Shamrock Rovers and at home to Cork City – were underwhelming and yielded just three goals as Roddy Collins, box-office on camera if not quite on the pitch, began his brief reign in charge of the Candystripes.

As RTE fulfilled their quota of games at the start of the season and gave way to the more enthusiastic and supportive Setanta Sports during GAA season, the trend continued that televsised League of Ireland games – whether due to poor selection or bad luck – were far from box-office events.

That all changed two weeks ago, when Dundalk travelled to St Patrick’s Athletic and served up arguably the game of the season. Having gone down to a second-minute goal, the league leaders laid siege to the home side’s goal and ultimately emerged without a point, offering Cork City a route back into the title race.

The game exhibited everything that’s good about League of Ireland football. Liam Buckley and Stephen Kenny’s sides were unabashedly, unashamedly attacking, last year’s champions putting up a firm defence to this year’s champions elect in a manner that would excite any football fan the world over.

On the Dundalk side, the league’s most accomplished player, Richie Towell, ran the show in an unfamiliar deep role, while team mates Andy Boyle and Pat Hoban showed the form that will have Stephen Kenny sweating over whether he can keep prying eyes off them during the winter transfer window.

The only pity is that the game was broadcast on a cable channel only some Irish people have access to – and nobody outside of Ireland – so a classic encounter of arguably the two best sides in the country was restricted only to those with enough ken and no other plans to tune into.

With the GAA season all but over and their quota to fill, RTE have turned their attention back to the League of Ireland, and they celebrated their return to live football with the first scoreless draw of the season with Dundalk’s visit to Tallaght and Shamrock Rovers in the FAI Cup semi-final.

Sod’s law dictates that any major televised fixture in Ireland will turn out to be a damp squib, and so it turned out with only Karl Sheppard’s dubiously-disallowed headed goal the only clear talking point of the night.

Sheppard would go on to become the difference between the two teams, grabbing two late goals as a substitute in Oriel Park to send the Dublin club into a semi-final meeting with one of St Patrick’s Athletic, Finn Harps or Derry City.

The Hoops and the Lilywhites are set to meet for the third time in eight days on Saturday night in the EA Sports Cup final on Setanta Sports. A large travelling support is expected from Dublin, and with the tie guaranteed to be settled on the day, there is guaranteed to be at least some drama in the wee county.

Whether any action in a league cup final will be enough to convert floating fans remains to be seen, but a winner-takes-all tie between two of the proudest clubs on this island should at least provide some measure of drama.

Inevitably, one of the biggest fixtures on the Irish football calendar will have to compete with a major clash in the English Premier league – Liverpool facing West Ham – and therein lies the challenge facing domestic football: can our clubs compete with the attraction of Carlton Cole and Mark Noble?

Saturday evening, as ever, will be the acid test.

2 thoughts on “The LOI has everything the average football fan wants, but can it compete with Carlton Cole?”