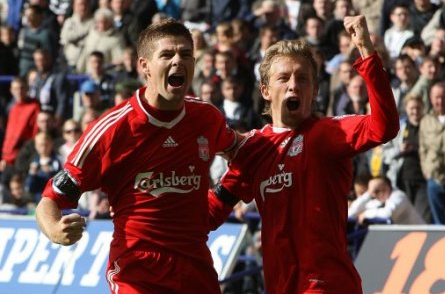 Lucas is out for the season. Gerrard is out indefinitely (presumably with a forthcoming return). Spearing is in the middle of a three game suspension. To say that Liverpool has some trouble to deal with in their midfield is an understatement. With just a few weeks left in the summer transfer window, I thought Liverpool were going to be challenging for the best midfield in the Premier League. Yet, then a host of players transferred or were loaned out. Poulsen (unsurprisingly) moved on. Joe Cole, Alberto Aquilani, and Jonjo Shelvey all loaned out towards the beginning of the season. Gerrard still injured. Meireles leaves for Chelsea on transfer deadline day. Suddenly their midfield was down to six healthy players.

However, all is not lost. The immediate future does not look grim. An away match at Wigan, followed by home games against Blackburn and Newcastle lie ahead in the end of the month. Liverpool’s midfield can survive. The key is Charlie Adam. After the loss of Lucas, he has stepped in to anchor the center of the pitch. In the absense of Jamie Carragher, I believe he deserves to captain the squad. Pepe Reina has been quite a player for the club for many years, but a captain needs to be closer to the action. Against a team like QPR last weekend and Villa on Sunday, when Reina was involved minimally, Liverpool could’ve used a little inspiration from an outfield captain.

The midfield is quite well equipped to round out the rest of their December fixtures. Spearing will be back in a few matches and Gerrard will hopefully be back as soon as possible. But, Liverpool lack depth. They have tried different formations at different points in the past two matches against Fulham and QPR. At Fulham, they employed a 4-5-1 of sorts, with Bellamy and Suarez coming back to help in defense on the wings. I think both were given too much responsibility. Suarez does best with the ball at his feet and open space ahead of him. He can’t do this when defending. Suarez and Bellamy are also not good enough to create attacking moves from a defensive position. This may have been why Carroll struggled. He does better with a man playing alongside him. He doesn’t have the ability to hold up a ball amidst a hoard of defenders. He needs Suarez or Bellamy or Kuyt up there next to him to play off of.

The formation at QPR was much better, but the midfield was still a little flat. Adam and Henderson played in the center, with Downing and Maxi on the wings. For the Villa game, Dalglish returned to the formation used at Fulham, except with Suarez alone up front. Bellamy was the left winger and created more opportunities than at Fulham, with Downing on the right. Shelvey, Adam, and Henderson played in the center of midfield, with Shelvey playing at the top of the triangle. Despite a 2-0 victory, Liverpool still did not create a goal from open play. Suarez hit the woodwork on two occasions and was particularly threatening, but both goals came directly from corner kicks. I think the problem might go back to the attacking midfielder again. I mean no disrespect to 19 year old Shelvey, as he played very well, but he is no Steven Gerrard.

Liverpool needs the attacking spirit of Gerrard. They need a driving force in the center of midfield. They need their captain back. A diamond in midfield (with Gerrard as the attacking central player) would suit them best, with Adam or Spearing fulfilling a more defensive role. With a diamond, they would also probably need another defensive player, so wingers could probably not be employed on both sides. Henderson and Downing would be a wonderful mix. Downing’s attacking form paired with the more conservative play of Henderson would probably work best. Against sides that are less of an attacking threat, two wingers could be started.

Up front, any of the four strikers available to Liverpool would work very well. I think Carroll will do much better in the formation, and Suarez, Bellamy, and Kuyt would do just as well. There is no doubt that goals need to start coming, and fast. Andy Carroll cannot do it alone, as he was often left to do at Fulham, and neither can Suarez, who may be absent for a lengthy period of time in January.

I have seen Liverpool linked with various players with the January transfer window coming up. Without any major injuries, Liverpool appear to be content in the defensive department. Johnson, Kelly, and Enrique provide an attacking presence on the flanks, and Agger, Skrtel, Coates, Carragher, and even Wilson will provide a strong center for a few years. In the midfield/striker area, they need another attacking midfielder, who is preferably young. Gerrard, unfortunately, is on the way out. At 31, he only has a few years left and the man who led Liverpool to a comeback win in Istanbul is very far gone. His constant injury problems also do not help the situation. Another attacking midfielder would hopefully score some goals and provide Suarez and the other forwards with more and better service. Aquilani could provide another option but he will not be back until the summer and is most likely on his way out.

Liverpool navigate a tricky away match to Wigan on Wednesday. Wigan just drew Chelsea at home this weekend. I have seen that Gerrard may be involved in the FA Cup match against Oldham in January, which is still several weeks off. Sunday also saw the return of Jamie Carragher in a brief substitute appearance, playing in front of Agger and Skrtel.

Kevin is currently a student at Rutgers University and writes his own football blog.