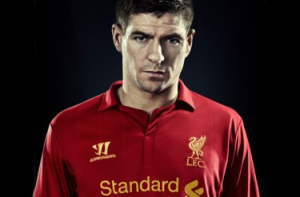 At the age of 33, Steven Gerrard remains an integral part of the Liverpool team. So far this season, he has recorded six assists (joint second in the league) and averaged 2.7 key passes per game – third highest after the unstoppable Luis Suarez and the pass master Mesut Ozil.

These qualities of the England skipper are hardly a revelation to anyone with an interest in LFC news. The question is – how do Liverpool perform in games of high intensity with Gerrard in the side? How do they deal with opponents pressing them high up? And equally as important, do Liverpool themselves press effectively enough with Gerrard at the heart of midfield?

This season, Liverpool’s performance tends to drop in the second half. This was particularly noticeable away to Aston Villa (Liverpool did not concede only thanks to Simon Mignolet’s heroics), away to Swansea (drew 2-2), at home to Southampton (lost 0-1) and away to Everton (drew 3-3). In these games, Liverpool had to sit much deeper after the interval (and even in the first half against the Saints) and suck up pressure. It was their incapability of counter-pressing rather than cautiousness which prevented them from pushing up.

Brendan Rodgers is a quite pragmatic manager. He does not require his team to press high up the pitch and maintain a high defensive line when the players at his disposal or their physical condition do not meet the desired requirements, as the likes of Marcelo Bielsa and Andre Villas-Boas, apparently, do. Neither does he find disjointed pressing useful – unlike Jose Mourinho – who usually does not mind a “broken” side.

Nevertheless, Rodgers’ footballing philosophy is most definitely proactive, and he likes his sides to press whenever possible and win the ball back quickly. However, the midfield combination featuring Gerrard alongside Lucas Leiva is not ideal for this kind of football. Luis Suarez can initiate pressure from the front, arguably, better than anyone else in the league, Jordan Henderson’s energy is boundless, Liverpool have two energetic wingers in the shape of Raheem Sterling and Victor Moses, but the Liverpool captain is not apt at pressing high up anymore. Even in his heyday his positional sense was questionable at times, and nowadays he often leaves Lucas exposed when trying to act as a ball winner.

The thrashing of Tottenham last week demonstrated how potent the midfield trio of Joe Allen, Jordan Henderson and Lucas Leiva and the base of it may be. Allen is a widely criticised player, even among Liverpool fans. But his contribution to that emphatic victory was absolutely crucial. His positioning was very good, he pressed effectively and won extraordinary eight tackles, two of which were right on the halfway line and three – in opponent’s half. Henderson’s performance who pressed, dropped deep and distributed accurate passes was brilliant. Thus, having Suarez, Henderson and Allen all adept at intense pressing resulted in Liverpool preventing Tottenham from building attacking moves out of the back.

Pressing high up might be especially useful against Chelsea. When Southampton visited Stamford Bridge on the 1st of December, the Blues just could not deal with the high pressing from Mauricio Pocchetino’s side. Jose Mourinho had to alter his tactics drastically at half-time by introducing Demba Ba as an outlet for simple long balls. Such were Chelsea’s struggles against an athletic, relentlessly pressing side.

If Allen and Henderson continue the way they were crucial to brushing aside Tottenham, they will be key in preventing Liverpool from being overrun in midfield at the Etihad. Manchester City boast a powerful duo of Yaya Toure and Fernandinho, whose power might be matched by the work ethic of Allen and Henderson. Besides, Henderson offers a big threat breaking through the middle as he did brilliantly against the Spurs and in a similar fashion last season against Arsenal at the Emirates. Those runs might prove particularly dangerous against City considering their shape not featuring a designated holder.

The relative freedom Henderson enjoyed against Tottenham breaking forward owed much to Allen’s disciplined positioning who is keen on protecting the back four as Lucas. When in good form (and his performance at White Hart Lane indicates he perhaps finally is), the Welshman is quite strong defensively despite his rather diminutive stature. At Swansea, in his first season in top-flight football he averaged 3.1 successful tackles per game (10th highest in the league) and 2.1 interceptions. Fielding Allen and Henderson in the centre of the park at the Etihad would be useful as part of a cautious approach against a high-scoring side, and could prove an effective proactive move at Stamford Bridge against a Chelsea side vulnerable to high pressing.

Steven Gerrard remains a classy footballer. He has many strengths and, most importantly, he is a true role model. But it will be no wonder, if Liverpool perform well against Man City and Chelsea with their legend watching from the stands.

4 thoughts on “Liverpool’s midfield to thrive in absence of Steven Gerrard?”