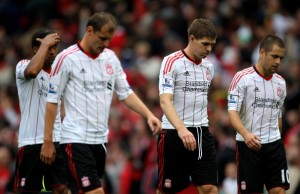 It wasn’t supposed to be like this. When the air of revolution peeked out from beneath a red veil, a brief glimpse of sunshine allowed some of us to hope.  As Rafa Benitez departed, and Roy Hodgson entered the fray, we briefly allowed ourselves to wonder if the disasters of last season could be swept under the carpet. We wondered if they could be locked in a cupboard, forever to stay hidden as the once formidable.

Liverpool Football Club again rose and stood amongst the elite. 5 games into the Barclay’s Premiership and it suddenly feels like Groundhog Day; 5 points from 5 games and a defeat to our greatest rivals, Manchester United, has left some peering into the bottom of a wine bottle. The revolution that seemed on its way had apparently now hidden itself back under its veil, flirtatiously suggesting it could soon make an appearance but not revealing when.

Perhaps it will appear when the club is sold. After all, we can’t underestimate the effect the debt has had on the club. Whilst I’m a firm believer in working with what you have, it is hard to dismiss the argument that more money often equals more success. Modern football is so technologically advanced that matches today are often decided by moments of genius and inspiration by individuals rather than the team play we were often treated to from the past. Even a great team like Barcelona, who are the model of team work and team ethic, often rely on the individual brilliance of Lionel Messi to provide that special moment that opens the door to victory. And it is this individual brilliance that the lack of financial muscle has deprived Liverpool Football Club of. Some may immediately point to Steven Gerrard and argue that he has proven time and again that he can produce such moments. Others would suggest the addition of Joe Cole now adds to Gerrard’s brilliance and gives Liverpool a little more. I wouldn’t argue against this as I feel both players are capable of outstanding individual moments that win matches but as we all know, even a performing artist needs backing vocals to harmonise. Whilst Lionel Messi is often supported by the likes of Andrés Iniesta and Xavi Hernandez amongst others (who themselves possess individual brilliance of a different kind), the Liverpool supporting cast is one of functionality rather than creativity. 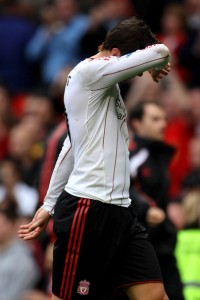 In Dirk Kuyt, Milan Jovanovic, Raul Meireles, Maxi Rodriguez, Christian Poulsen and Lucas, Steven Gerrard and Joe Cole are supported by players who are intelligent, tactically aware and hard working but who lack that inspirational brilliance to expose a hole in a team’s parked bus. Whilst the media obsess about the “lack of quality” of the Liverpool squad (a total crock in my opinion), I bemoan the lack of ingenuity and creativity that has slowly dissipated from a team that was once known for playing brilliant attacking football. So perhaps when the club is sold and more funds become available, Liverpool can add more ingenuity to the squad, offsetting the hardworking and intelligent players we already possess to create a better blend.

The debt, however, is not the only thing keeping lady hope under her red veil. As we witnessed in the match against Manchester United, the tactical approach of Liverpool, particularly in the first half, was so defensive you felt like you were watching a heavyweight boxer pound on a featherweight. It is easy to understand Roy Hodgson’s thinking; keep it tight at the back, let them attack then counter with the pace of Torres. However, with Fernando Torres not fully match fit, the ball ended up coming back towards the Liverpool goal repeatedly, giving the appearance of a badly deprived side against a richer, more affluent team. Watching all the Liverpool matches so far this season, including the Europa League games, that is an approach Liverpool has used too often. Keeping your shape and making yourself hard to break down is great when you’re an underdog, but when you are a team expected to win a match, it is essential to press the opposition, dominate the ball and look to expose them as often as possible. That is something Liverpool hasn’t done this season.

Even in the 4-1 win over Steaua Bucharest, the team’s performance was mediocre and the score line only grew after the opposition resigned themselves to defeat. The system used at United – a 4-3-3 rather than the 4-2-3-1 some seemed to think it was- might have worked with more pressing and more commitment to going forwards. Instead, with the team looking to maintain its shape, Torres was isolated up front with Raul Meireles dropping off to funnel United out wide as Liverpool played with a lack of width. Sir Alex Ferguson’s suggestion that United could have won the match by a “cricket score” bordered on the senile, however, Liverpool did concede the authority of the game to United by choosing to hold rather than press the ball. Sometimes in football, it really is as simple as if you don’t have the ball, you can’t play.

So, as the doom and gloom continues to swirl around above Anfield, lady hope continues to flirt with appearing. With the recent news that Blackstones will not be supporting Tom Hicks in his greed driven attempts to fully take over the club and Roy Hodgson’s interview about Liverpool needing to be more creative in the final third, us Liverpool fans can only hope that she can eventually be lured out and the sunshine can once again beam out over Anfield Road.