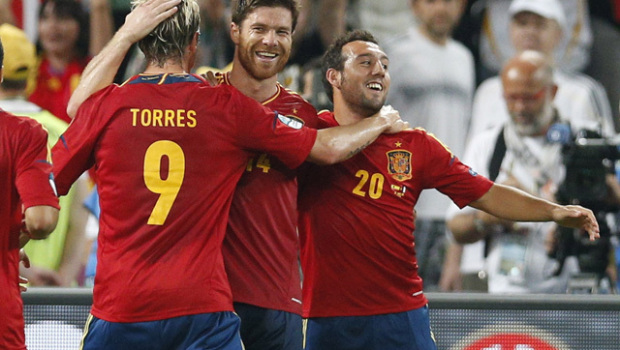 The first semi-final of Euro 2012 sees two sides from the Iberian Peninsula face each other in what promises to be an intriguing game. Spain have been far from their elegant, fluent best so far in the tournament, but have remained unbeaten and largely untroubled so far.

Their 2-0 quarter final victory over France thanks to two goals from Xabi Alonso was far from their best, but the current European and world champions will be hopeful they are peaking at just the right time.

The Portuguese suffered a defeat to Germany in their first group game of Euro 2012, but since then have looked impressive, especially in their attacking play. Their 1-0 win in their quarter final over the Czech Republic was impressive despite the close scoreline, as they completely dominated their opponents for the entire game before Cristiano Ronaldo’s 79th minute winner.

Who to watch for

Portugal’s key man going forward is captain Cristiano Ronaldo, who has lit up Euro 2012 so far with a series of dazzling performances and three goals. He will be supported in attack by Nani, who will need to be on top form to help break through a stiff Spanish defence. However, with Helder Postiga injured, the task of leading the line will probably fall to Besiktas forward Hugo Almeida, who will be keen to make an impact from the off.

Meanwhile, Raul Meireles will be crucial in the Portuguese midfield, as will Joao Moutinho, as they look to stifle Spain’s passing game. Fabio Coentrao looked good both defensively and offensively for the Portuguese in their quarter final against the Czech Republic, and could be a good outlet again as he marauds forward from left back.

The Spanish policy of playing without a recognised striker may be about to end following reports of some players in the camp being “drained.” In which case, Fernando Torres will be the side’s recognised striker, and will be hopeful of making an impact, having already scored two goals in the tournament.

Spain’s biggest threat comes in their midfield, where Xavi, Xabi Alonso and Sergio Busquets look to play their intricate passing style and hold possession for long periods, wearing their opposition down. Meanwhile, goalkeeper Iker Casillas will be a crucial last line of defence against his Real Madrid team-mate Ronaldo.

This promises to be an incredibly close and intriguing game between two closely-matched teams that play an exciting brand of football. Spain must start as favourites given the sheer depth of their squad and their ability to keep possession for long periods, but Portugal will be hopeful of victory themselves.

The Portuguese have looked impressive and effective so far in the tournament, and in Cristiano Ronaldo they have a match-winner who could be the difference between the two sides.

This game could go into extra time, but whether it does or not, Spain should take a 2-1 victory in what promises to be an absorbing semi-final.