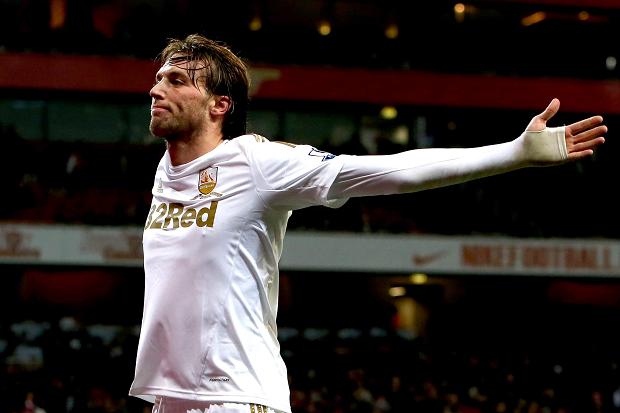 In recent seasons, there have always been foreign forwards, outside of the top four, who have instantly adjusted to the rigours of Premier League football in their first season.

Remarkably, that is without mentioning the ‘quick-fire’ breed of the likes of Amir Zaki, who scored ten league goals for Wigan by December, 2008 but then badly faded in the second-half of the season.

Undeniably, Swansea City’s Michu will certainly not fall into the Zaki category, having enjoyed consistent gluts of goals – rather than distinct patches – and netted thirteen goals in the Premier League’s twenty-two gameweeks so far this season.

However, doubts remain about whether Michu can replicate his immense performances and goalscoring tally next season.

In truth, the long-term doubts over Michu – and the fact that no other Premier League club other than Swansea took even a vague interest last summer – is perfect evidence of British footballing ignorance.

The £15 million spent on Joe Allen by Liverpool or the £12 million spent on Jack Rodwell by Manchester City accentuates this fact, seemingly concealed by the club’s thirst for more home-based players for Europe.

With Wigan and Tottenham having rejected the chance to sign Michu on a free transfer in the summer of 2011 – with the then midfielder only requiring a salary of £6,000 per week, a wage that many Academy players at those clubs easily command – the question has to be why?

Sure, he had yet to establish himself in his most effective position of striker, but as a number ten, Michu was pivotal to the re-emergence of Celta Vigo in their promotion challenge in the Segunda Division in 2010/2011.

Also, this standard of football was above the Tercera Division where, it must be remembered, the likes of Sergio Busquets and Pedro cut their teeth under one Pep Guardiola in 2007/2008 before going on to play pivotal roles in the Catalans’ Champions League win a season later.

Always influential, and netting what seems a now disappointing thirteen goals in sixty-three league games for the Galicians in 2009/2010 and 2010/2011 combined, Michu seemed to possess the qualities that merited a gamble from a top division club.

Tall, stoic in hurdling the tackle, hard-working and armed with brilliant timing and positioning, the then twenty-five year old midfielder was already armed with Premier League-quality attributes and was destined to be a top-level player.

Wigan instead opted for David Jones, while Tottenham plumped for Iago Falque. Both, certainly, are classy central midfielders but neither had anything close to the explosion Michu had in La Liga in 2011/2012.

In actual fact, though, Sir Alex Ferguson had never heard of Michu and recently lamented that he “needed to have a word with his scouting department [about the failure to land the Spaniard].”

Coming five weeks after Laudrup’s appointment, one wonders whether Michu was holding out for more lucrative interest or, more likely, that he was reluctant to leave Vallecano – who had finally provided him with the top-level stage, following his ascent from the Tecera Division to the Segunda Division B to the Segunda Division with Real Oviedo and Celta Vigo.

To underline the coup – and accentuate the failure of other clubs’ scouting departments and hierarchies – Michu had a mere £2.2 million buy-out clause in a rare example in Spain of a player not having a unrealistic, unaffordable gateway out of his contract.

For this, Laudrup deserves much credit, as well as cunningly using the fact that he was one of Michu’s boyhood idols to great effect.

Still, the Dane’s decision to push Michu –a la David Moyes with Tim Cahill and Marouane Fellaini in recent times – into the lone striking position was the ultimate masterstroke.

Disrupting Danny Graham – Swansea’s popular, hard-working top scorer last season with fourteen goals – could have seriously back-fired for Laudrup in the dressing-room and on the terraces but it has paid dividends – even with the Englishman’s recent links to Sunderland.

With Michu possessing the ability to effortlessly slip into the number ten position – and with Graham immensely motivated – Graham’s form has not suffered and he remains on track to replicate last season’s exploits (seven goals this term, so far, despite often starting from the bench).

Still, it seems inevitable that, given that he will be capped for Spain against Uruguay on 6 February, few clubs are going to resist the chance to sign Michu this time around.

However, clearly, the Spaniard is armed with the level-headedness and refreshing loyalty that does not make it a foregone conclusion – without even addressing Swansea’s £30 million asking price.

After all, this is a man who rejected – what could have been his only chance, without hindsight – the opportunity to join Sporting Gijon, then in La Liga, in 2010 out of loyalty to Real Oviedo: the club he had left in 2007 but had always supported.

A similar scenario may well repeat itself this summer with Swansea, particularly since the club have given him the platform to somehow pierce Vicente del Bosque’s usual La Liga-focus.

To take just one example, against Chelsea on 9 January, Michu’s effortless class was never more evident: elegantly, seamlessly thriving while his compatriot and international rival, Fernando Torres, reached a new nadir under the weight of expectation of the Chelsea shirt and an inflated transfer fee.

Torres’ travails serve as a caveat and in temporarily resisting the seemingly golden, immediate offer of Champions League football with another club this summer, Michu will have every chance to sustain his ongoing tactical development as an international-class striker and prove that he is far from a one season wonder.