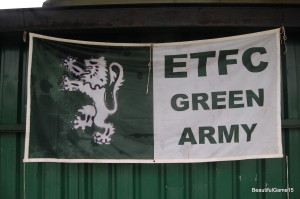 The King starts to play as the teams walk out, I love an eclectic choice of entrance music. One ET fan is still full of the New Year spirit and sings along making his way to his seat “it’s the wonder, the wonder of EDGWARE!”.

The music is also a cue for the people still inside to make their way outside, there is now a noticeable amount of other football scarves on show Boreham Wood FC and Hendon FC whose games were abandoned.

“Stop cuddling and get on with the game” shouts the singer “hate that huddle” he announces. The voice over the tannoy is a bit more genteel, “hope you all enjoy the game”.

ET get off to a flyer, scoring after four minutes, and don’t look back, “come on you wares” shouts a supporter. Tom thinks the celebration is a little muted, the players perhaps have a feeling they will be getting a hatfull.

Despite Tom’s slight objections, “the rains picked up” we move after the goal, in search of a better vantage point, and join the few who are braving the elements, standing behind the goal, only once we have squeezed past the club photographer under his humongous fishing umbrella, next to the stairs from the changing room down to the pitch. A few people with their own more sensibly sized brollies stand pitchside.

Fifteen minutes gone, 2-0 the green machine keeps rolling on. One ATFC coach is understandably not best pleased “too easy” he bellows. For a moment, both our attentions are taken away from the celebrations, as what I can only describe as scene from ‘The Birds’ is playing out, a mass of gulls, and smaller darker birds clearly angered by the ATFC defending fill the sky.

ATFC get their first shot on target after about twenty minutes, and even though it’s pretty tame, the fact it was allowed to happen does not best please what is a tough crowd to please round here, “come on Edgware” he says like a disappointed parent.

Just shy of thirty minutes gone ET get their third, a goal one player tells the scorer was “superb” another that it was “mustard”. “They might look like Brazil, but they don’t play like it” is Tom’s opinion on a pretty torrid thirty minutes for ATFC.

“What you having at half time?” I ask Tom, “a pot noodle with a hot dog sticking out”. However, before he can get stuck into that, ET have a goal chalked off for offside, but they have no reason to worry, they are making chance after chance, it could be in double figures already. When they do get a fourth just before pot noodle time, Tom describes it perfectly “he went through everyone”, the player rounds the keeper and scores, it finishes off a dominant, rain soaked half. 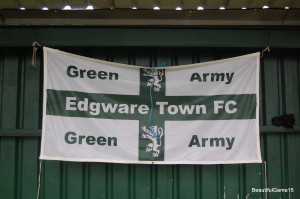 A large Geoff Shreeves holds the attention of most people, as he shouts in that way he does, about what looks like a very dull first half in the Premiership. “I love a pot noodle” says Tom, the fiend, I’m not sure how you can it fucking stinks. It’s space age contents stew away and every so often he peels back its tinfoil lid, only to close it back up, because it’s not quite ready.

The heads of the referee, followed by the players bob past the small window of a door next to big Geoff, and we make our way outside, the steward on the gate, that lets the players onto the pitch, shares a joke with one “you actually going to start playing?”.

This half we are joined by a lot more people, ET are attacking this end now, with the shelter it makes for a much more inviting proposition.

More fans means more songs, and the group from Boreham Wood FC, who we recognise from our recent visit, join in a few “we’re green, we’re white, we’re bloody dynamite”.

“Rains back” says Tom, I’m not sure it ever went away, but it’s now difficult to see anything that is not illuminated by the floodlights, except for the Griswold’s house the other side of the park or a Temple, with its golden spires perched on the hill in the distance.

I’m not sure if one fan has been working on this song, slaving away like a creative type, surrounded by scrunched up balls of paper, or has come up with it on the hoof, nonetheless it’s quite impressive “we’re not Real Madrid, we’re not FC Barcelona, we’re Edgware Town and Matty is our owner”.

ET are in complete control, and the game has been a bit of a procession since half time, they make chances, but as one fan puts it “we’re just going through the motions”, like when a burst of pace down the right, results in a good ball across the box, there is not one ET player there to meet in, no player is really busting a gut, much to the annoyance of one screaming fan “why is no-one in the box!?!”

“Got a bottle of Vodka in there” says a fan to the ATFC keeper while he takes a drink. “4-0 at half time, you need a drink son”.

A goal from ATFC, a great flicked back header, brings what just seems like a counting the minutes to home time exercise, to life. ET’s players are furious, and argue amongst themselves, as one fan puts it it’s only a “consolation goal”, but a clean sheet always makes for a better result.

“Can you hear the Ampthill sing?” sing the group near us, and although there is no response, you can most definitely hear the green and white spirited horn one fan has produced from his bag, giving it a blast every time the ATFC keeper takes a goal kick.

“He comes from Italy, and wears Versace.” 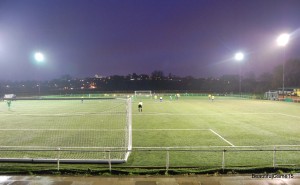 The home team players continue to grumble with each other they are being sloppy, “Jesus, boys” shouts one towards his teammates. With about thirty-five minutes of the second half gone ET get their fifth goal, a shot from the edge of the box fizzes into the back of the net, and the referee might as well blow the whistle now.

Very little of note happens in the remaining minutes of the half. We do marvel at the fact four people are huddled under the mega umbrella, and I wonder if you have to pay Council Tax on it, it’s so huge.

A mass exodus of two fans means they are serenaded by those who are staying for the final whistle “is there a fire drill, is there a fire drill”. There is a chance in extra time for the ET number 11 to make it six, only to hit the post from a yard out, leaving everyone, no more than him, a little baffled.

The saturated ET players are clapped off “come on you ‘wares” and Tom almost gets as muddy as them, as we make own way down the grass verge just in front of where we had been standing, and he almost go arse over tit, I’m fine however, thank God for Doctor Martins!

Things are looking very rosy for ET, so many pieces of the jigsaw seem to be falling into place, just at the right time and it’s quite remarkable so soon after its rebirth. If you fancy some darts, a dance, a pot noodle or some Elvis, ET is the place to be.