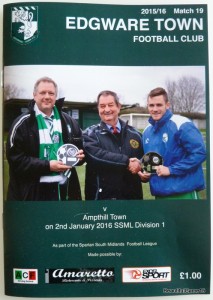 Nature and shouted in her face “you will not win!”, because Edgware Town FC (ET) have a 3G pitch.

You could drop an ocean on it, and once you have swept all the starfish away, you would still be able to play, in the immortal words of Wayne Campbell “GAME ON!”.

Tom’s timing is immaculate, I notice a flat cap wearing figure appear from the gloom, at a bus stop en route. Once aboard it takes him a minute to realise that I’m sitting about a foot away, or he is ignoring me.

We exchange pleasantries about how annoying our families were at Christmas, how much cheese we ate, and what PS4 game we received that allows us to waste endless hours collecting bobbins or fancy hair brushes.

Off the bus, and a short walk later, a large green notice board at the entrance to a very soggy park lets us know we are on the right track. Not too far in the distance, past the waterlogged fields, and miserable looking dog walkers, four thin floodlights stretch up into the sky, too narrow to even cast a shadow, they are beacon in the ever worsening weather.

Not put off by the burnt out car just past the entrance, a homemade sign written in black marker pen, stretched across a fence next to an intriguing small red brick turnstile tells us we have arrived “Silver Jubilee Park”.

I had seen it online abbreviated to SJP, I’m sure the club would like it made clear, as would I, that the abbreviation is in no way infringing on the copyright of ‘Sex In The City’ actress, and wife of Inspector Gadget, Sarah Jessica Parker. No-one wants a Victoria Beckham, Peterborough United FC situation on their hands.

From Inside his cosy, dry turnstile, Chris greets us in his woolly hat. A first year club board member, and newly appointed women’s team manager, he is more than happy to venture into the drizzle to excitedly point out works and developments underway, all across the ground.

I think it’s fair to say the ground is a little sparse, for now, but you can see that is all about to change. The clubhouse and changing rooms are elevated along one side of the pitch, tacked on end is the main and only seating area. A small green covered terrace sits at the top of a slope behind one goal, with only a low hedge separating you from the surrounding park and picturesque tree covered green hill, that rolls off into the distance.

The warmth of the clubhouse is much appreciated, and except for a few ET fans in their green and white scarves by the bar at one end of the Viking Longhall we are first to arrive. Two things are clearly king here: darts and dancing. There are six darts boards, four on one wall, two on another, and a large wooden dance floor, that takes up the majority of the floor space, and shines some light on the sign on the way in “dancers this way”.

The Dundee Derby is playing on a large screen at the opposite end of the room, as we take a seat on one of the tables covering the centre of the room, stopping Tom from breaking out a few moves he highlights the obvious “they like their darts”. We can hear the music playing in the changing rooms through the wall, like a neighbour having a party.

“Happy New Year” says the man behind the bar, which is three quarters optics and beer pumps and one quarter tea room, snack bar and club 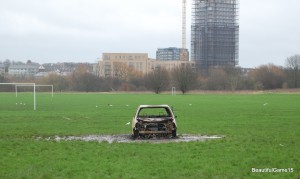 The bulging, cling film wrapped rolls take pride of place, stickers written in biro sit on top of them, letting you know what’s inside, it’s just a cup of tea for now, but I have a feeling that we will be back.

Tom is on weather watch, every so often peering over my shoulder out the window behind me “still raining”. The ham salad rolls on the bar proved too tempting, and he is quick to grab us one each, producing a bag of crisps from his rucksack to go along with them. In hunt of a programme I nip back to the ET corner, and meet the club chairman, and former Port Vale FC player Daz.

A tall Northerner, he is beyond modest when I compliment him on their fantastic season so far, “yeah doing alright” he says in a mannered Staffordshire accent. One loss in the league, three in all competitions, a goal difference of +45, score lines such as 6-3, 12-3 and 9-2 twice, I think can most definitely be described as a lot better than “alright”.

Perhaps somewhat the perfectionist he tells me of their “100% away record” but he is a little perturbed when he talks about their home form: “lost all our points here” he says, pointing outside. That is five points by the way, one draw and one defeat, hardly relegation form.

Back at our table, it’s not long before the inevitable, its raffle time. Curiously Tom gets involved, perhaps the chance of a bit of Kit Kat money has tempted him to the dark side. It’s not your usual set up, it’s a scratchcard the likes of which we have only seen once before at Wadham Lodge FC.

Pick your team and if it appears under the silver panel, you’re the winner. Arsenal are taken much to Tom’s annoyance, so he opts for Wolves, Spurs are not even on it, so inspired buy the game on the TV, I go for Celtic.

Patiently waiting, while we deliberate what team to pick, is club committee member Geoffrey, who tells us that the raffle is a big help in raising funds. By his own admission he has never had any interest or “involvement” with football before, but as a recent retiree, he needed something to fill the void.

Even though new to the ‘Beautiful Game’, he seems to have got to grips very quickly with the importance of grassroots football. He then encapsulates its necessity, in two effortless sentences, he sums it up so perfectly that I wonder if there is any need to go on, his words will probably be on t-shirts some day, children of the future will ask, when they are watching the PC World International Sky Plus Yellow Tie League One “why did we not listen to Geoffrey?!”

“It’s like a tree, you need the roots. If you don’t keep the roots going, the tree doesn’t grow”.

Daz joins us “what’s up?” he asks. I’m now armed with my notebook, and he is more than happy to tell us in more depth about a club with a dark recent past, but with a much, much brighter future.

In 2008, due to the loss of their ground ET’s original incarnation went under, and was reformed in 2014, all due to what seemed to be a flippant comment between friends. “Why don’t we start our own club, so we don’t get fired” said Daz to the now owner, who happened to own the rights to the ET name.

Always interested to know what drives people to start a club, it is a well documented headache, what is their plan? “Promotion back to the Ryman Premier and take the club back to where it was”.

£250,000 has been spent on the ground to get it up to a category C standard, which will eventually be big enough for nearly 2000 spectators. 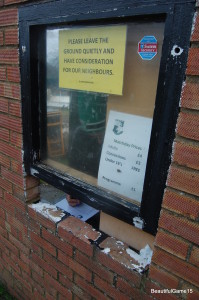 A much higher standard than they require he admits, they get about an average turnout of 80, but they will be ground sharing with Hendon FC of the Ryman Premier League, it’s a perfect partnership.

“God send, the 3G” he says as the rain continues, so many clubs at this level I’m sure are envious of it, many away games have been canceled, and a fixture backlog is growing.

“Hard work at this level, but it’s rewarding.”

The local community, “lots of local schools use the pitches for free” and attracting new fans is high on the agenda. With a large catchment area, and not a huge amount of competition, only Barnet FC whose prices for a League Two side some might deem a little steep, what better than a local affordable club.

He introduces us to the match day secretary “I do all the hard work, then he takes over so I can relax and have a few pints”.

There feels like a lot going on at ET this afternoon, and it’s not long until we bump into a familiar face Deryll David the sharpest, youngest referee in the land, who recently made a video with our friends at Pitch Talk.

Imagine a dash of James Bond, mixed with the cool kid from your secondary school, he looks well turned out in his suit, and is at ET because his game had been called off. Referees are a bit of a theme, and why the boardroom is out of bounds, the match officials are being assessed and, as Daz put it, gesturing to the men in dark suits “we just leave them to it”.

“It’s easing” says Tom, the rain has gone from cats and dogs to a downpour, as he returns to the noisy clubhouse after taking some pictures of the ground ,“some flags out” he tells me, hanging from the back of the covered terrace.

The low slung roof of the main stand and it’s pillars are reminiscent in a very small way of the back of the west stand at Highbury, and make for a slightly obscured view, but Tom is quite right when he says “we will stay dry unless the roof collapses”. Opposite us on the far touchline, someone is “really struggling with that tent” as Tom puts it.

The removable roofs of the slightly squiffy dugouts, are getting caught in the wind, a two-man job proving almost impossible for the poor soul who drew that short straw. Tom does wonder if something is afoot, you hear stories of clubs making the visiting team’s life as hard as possible, no hot water, smaller changing rooms or in this case a roof “do you think the away team get one?”.

The visitors Ampthill Town FC (ATFC), are oblivious to the shenanigans, and are finishing their warm up just in front of us. The coach can maybe sense a bit of anxiety amongst the players “very quiet today, let’s get the talking going” he says, and attempts to inject a bit of confidence in them “no reason we can’t get three points”.

One player slips off the edge of the pitch, looking angrily at where he lost his footing, clutching himself, wincing. The coach ushers the team inside “let’s go, let’s go, let’s go” reminding the players there is no-one to clear up after them “make sure you take water bottles and tops in”.

“Ted, you will be able to give up work” shouts one fan over to the man who has just been told he has won the raffle, although not bitter, Tom is perhaps a little sore to say the least considering the winning team was Arsenal.

Two of the trip to Edgeware Town will be on Back Page Football tomorrow.