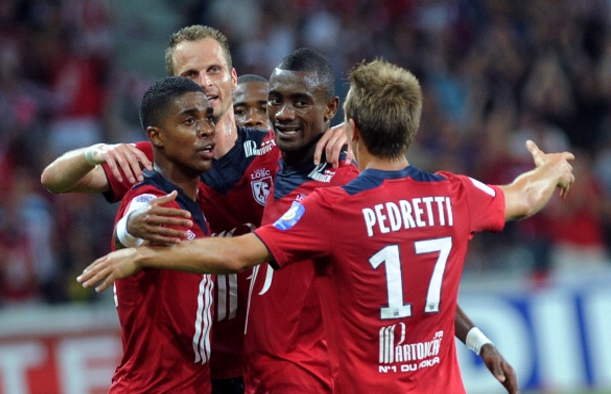 Sitting bottom of their Champions League group without even a solitary point, no matter the opponent it was going to be a very important game for Lille this weekend. Even the most passionate and loyal of Lille support would have been pointing fingers if there was no reaction to the absolutely awful performance that saw them lose 6-1 to Bayern Munich on Wednesday night.

Giving their side all the support they need, the Lille fans filled the Grand Stade Lille Metropole on Saturday afternoon for the visit of Brest. The Breton side were on a high after picking up an excellent 2-0 win over local rivals Lorient. Landry Chauvin had the chance to cause an upset with his ever improving side and heap misery on Rudi Garcia’s underachievers.

Some may have been surprised that wholesale changes weren’t made to the Lille XI that failed to show up in Germany, however back in the tea was club captain and midfield general Rio Mavuba, a presence that was definitely missed in Munich. After five minutes it was clear this team had been given an all mighty kick up the behind, the passes were flowing, the movement was good and it was a strong start from the home side. The only thing lacking was a goal.

On the left Dimitri Payet was very lively, a couple of shots from outside the box peppering Alexis Thebaux’s goal, but for all the excellent play it took until the final few seconds before Lille would make the breakthrough. Payet did superbly well to chase down a loose ball, keeping it from going wide he looped it high towards the penalty spot, the Brest defence jumped, everyone missed it and Salomon Kalou was there to apply the side-foot finish.

There was a mixture of relief and joy from the home support, similar to the celebrations from Kalou himself. It has been a tough start to the Ivorian’s time in Northern France, the former Chelsea man has had to adapt to a new style of play and the prospect of playing 180 minutes of football a week. After scoring the first goal by a Lille player in their new stadium, the goal against Brest was only his second league goal.

Following a good display against Valenciennes in the previous home game this was easily the forward’s best performance in a Lille shirt, he could have scored two or three, at times he looked like the player that Chelsea fans only got glimpses of, his best moment of the game saw hi, effortlessly slalom past two Brest defenders before losing the ball. Scoring from distance against Bayern has given Kalou that little bit of confidence he had been missing, and hopefully now he can grow into his new role and become a dangerous part of this dynamic Lille frontline.

The second half saw Brest come out with a bit more of a positive attitude, Chauvin had obviously read them the riot act during the break and through the movement of Eden Ben Basat and Larsen Toure they definitely cause the Lille defence some more problems to think about. Substitute Mario Licka forced an early save out of Mickael Landreau; the first action the Frenchman had seen all game.

It was a game that followed a pattern that Lille fans have seen all too often, dominate the opposition and beat the into submission, but fail to score the second killer goal, leading to a late, late equaliser. And you would have forgiven the Lille fans sitting in the north stand from thinking the worst when Payet fluffed his lines and headed Mathieu Debuchy’s perfect cross over the bar and into the crowd.

Substitute Tulio de Melo was next to miss a great chance. Salomon Kalou put the Brazilian through on goal after another fast paced counter-attack, but the striker could only poke his shot wide of the post. Seconds later Lille had another scare when their former player Larsen Toure forced a save from Landreau, the wingers shot bounced awkwardly in front of the keeper and he did well to turn it past the post.

As the minutes ticked on, the home side began to look nervous, unable to find the second goal and now Brest were turning up the heat. A few corners late on forced a couple of saves and panicked clearances from the defence. Mario Licka fired in a cross deep into injury team and there was defender Johan Martial free in the centre of the box, but his header skewed past the post, and Lille were safe. Another three points, their first league victory in a row, and they would end the weekend only three points off first place.

A positive reaction was needed, and it is clear that this team is slowly finding its feet. Kalou is improving game by game, and with captain Mavuba back to lead this team the lessons learned from the defeat to Bayern are clear to see and now that this new team can concentrate on the league there is nothing stopping them pushing forward for a top three finish.