In art Two of their report, The Beautiful Game duo bring us the conclusion of their visit to Weatsheaf Park.

Small pockets of fans surround the pitch, but the majority are like us, sitting in the main stand, or are just in front next to the pitch. “Come on the Swans” says a fan quietly, as the lights in the stand go out just before kick off – both of us look at each other not sure if it’s a mistake.

“Come on guys” shout various players from both teams, as we get underway.

The visitors apply all the early pressure, and their keeper is vocal in letting his teammates know “Great start whites!”. An early shot from just outside the six yard box, and two resulting corners, mean it is all a bit nervy amongst the home fans.

Although the bulk of them are sitting around us, the noisiest are standing behind the away goal, their flags hanging from the fence behind – one a St George’s Cross with “Staines Town FC Pride Of Middlesex” written on it, the other, with a little bit of help from the zoom on Tom’s camera reads “Football Was Not Invented In 1992”.

I get the feeling they are the same bunch we sat amongst at Orient, where their non stop singing despite the team’s cup exit and 6-1 loss, was phenomenal.

A low drawn out chant of “Yeeeeeellow!”, prompts the man in front to use the number one cliché from the big book of football clichés: Staines Town FC edition, when he refers to them as the “Staines massive”. I managed to write our previous blog without a mention to “me Julie”, “aight” or other such early 2000’s comedy catchphrases, I’m not going to start now, so will leave that one well alone.

“Late one, must of been delivering the mail” is the slightly odd comment the person in front of us makes under his breath, when he has to move to let in a late arrival to his aisle.

Fifteen minutes gone, and as Tom says, “a bit out of the blue” Staines Town grab a goal. A cross from the left is glanced in off the head of the number nine,  who kisses the badge on his shirt, as he celebrates.

There is a palpable relief, but still a level of nervousness amongst the home fans, “Park the bus!” shouts one. The desire to remain solid is clearly front and centre, it would be bad luck to once again be “Sucker punched”. Not that the noisy few need much reason to sing, but the goal means the volume has gone up on the “yellow, yellow, yellow!” chants. 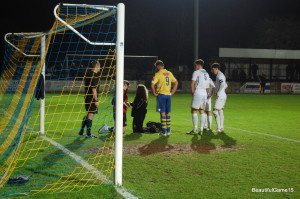 Since the goal, Staines got in their stride, the main point of attack coming from the gaggle of nippy, small players gobbling up the flick ons, and knock downs of the number nine, especially the number ten who is tireless, dogged and covering every inch of the pitch.

Although Staines are on top, particularly down the wings, where they seem to have free reign, they are sometimes a bit guilty of overplaying, or are unable to keep up with the speed merchants on the flanks. On more than one occasion however, they show flashes of a real lack of composure and make life much harder for themselves – a misplaced pass back, which results in a needless corner that thankfully Farnborough can’t capitalise on.

Half time is nearly upon us, and of course Tom has one thing on his mind – “I’m hungry”.

With only a few minutes left until the break Staines are awarded a free kick on the left, almost from the same position the ball was delivered from for their first goal. The ball is crossed in, it takes a nick off two players competing at the front post, hits an Farnborough player on the edge of the six yard box, and falls to the feet of number nine to poke home from close range, his momentum taking him to the back of the net, where he celebrates with the fans behind the goal – “yellow, yellow, yellow!”.

I always find the music played at football matches interesting, as little excuse is needed to play a song of one kind or another nowadays – an entrance song, halftime song, fulltime song, or in the case of Staines a goal song by Body Rockers – ‘I Like The Way You Move”.

“Game over” says Tom, and although there is still forty-five minutes left to play, FFC must be feeling pretty low right now, and with their away record, they can’t be very hopeful. 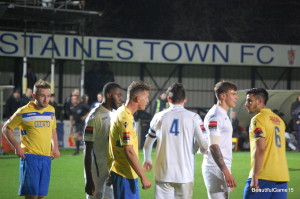 The voice over the tannoy has certainly perked up – “2 – 0 to the Swans!” he announces as the teams walk in and the lights turn on overhead like the interval at the theatre, but instead of tiny pots of ice cream, we  goes in search of something a little more substantial.

‘Swans Tea Bar ’is doing a roaring trade. The hatch in a wall decorated with blue and gold tinsel, and an unfortunate miniature Christmas tree, that does a nose dive off the counter, much to the annoyance of one of the women serving tea and burgers, “2nd time today” she huffs.

I have been sent to grab a place in the considerable queue and, as Tom pops to the toilet, he is a bit concerned on his return such is the demand for something warm, because it’s so damn cold, “Is there gonna be anything left?”

As if we had anything to worry about, the tea and burgers are dispensed with the highest efficiency, non-league tea urns are plumbed into some nationwide, central reservoir, that is the renewable energy we should all be paying attention to. It’s warm sweet restorative powers do a job on me and I’m ready for the second half.

It’s about now that I notice the results of the raffle scrawled on a white board, near where we came in. We didn’t win, but I’m ok, I have a mechanism to deal with losing now.

Tom is still chowing down on his burger, my cup of tea is balancing precariously on the low concrete wall, as we take up our new position behind the Farnborough goal for the remainder of the match, which is not underway for long before the away keeper is involved in a heavy clash with a Staines player and stays down – no rolling around, you can tell he is hurt.

The flags and fans have swapped ends as well and are less than sympathetic with the downed man, who after a bit of treatment is up and good to go. The second half is a little flat, but the wings are still proving fruitful for Staines, although one of the few times their opponents do manage an attack the home goalkeeper pulls off a good one on one save.

A little bit of fisty cuffs boils up after a heavy Farnborough challenge, but quickly simmers down, it does however get a another song out of the group near us – “Yellow, yellow, yellow!”. 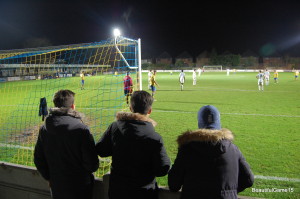 With just over twenty minutes gone Staines should have put the result beyond doubt, but a free header ends up hitting the net high behind the goal to catch stray balls, instead of going in. Fans and players alike are left asking each other “how?”

It’s now Farnborough’s turn to help the home team get a third goal, when a defender makes a sliding block at the back post after a low cross, which dings off the post and goes out for a corner. “You lucky bugger” exclaimed the person next to us, and by the look on the Farnborough player’s face he knows that oh too well.

Shortly after there is a big shout for an home penalty, mainly from the fans behind the goal, more than anyone else, the referee waves it away, one supporter is convinced that “Clattenburg would of given it”.

Whenever Farnborough Town do venture forward, they inevitably lose the ball and Staines are quick to counter. The number nine has not stopped – he wants his hat-trick – and when a simple side foot finish presents itself, he scuffs it wide. “Coxy!” remonstrates one fan, but not for long as a new song quickly emerges from the home fans – “Cox will tear you apart again”, to the tunes of Joy Division’s hit.

We make our way round to the tunnel moments before the the final whistle, the flat cap wearing steward is doing quite a loud running commentary from the sidelines “That’s ours!” he proclaims when the ball goes into touch. 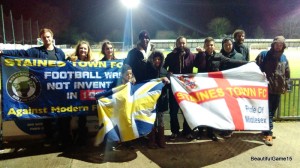 A considerable crowd has formed around the tunnel as the players walk off, the number nine is clapped off, and lets out a loud “Get in!” towards the adoring crowd. Jubilant fanfare music is playing over the tannoy, but the ever singing group offer their own song to the away team “Going down, going down, going down!”.

A passing Farnborough fan on her way out mutters to a person in her group “Good thing we are going down, don’t want to come back here again”.

“I’m the one who ran on the pitch” says one of the singers, who are in high spirits, and are happy to pose for a picture for us, before they head off to celebrate. “You are good luck” she tells us, “Well not last time!” I reply, mentioning they lost 6 – 1. Her reply is emphatic “No way, we had a great day, that was our cup final!”

What a warm welcome we received, what brilliant fans, the Staines Town supporters have got it right – “Non League Soul, Not For Sale”.