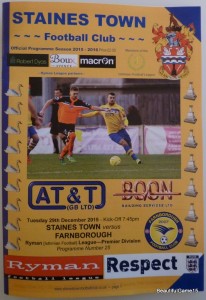 “Sun’s out….been out all day…it’s like Barbados here, plus we have the best pitch in the league” was the reply from one Staines Town FC fan on Twitter when I enquired about tonight’s home game against Farnborough FC, making sure it had not fallen foul of the bad weather, as one game we were considering, had earlier in the day.

The resounding response – thoughts of short sleeve shirts, drinks with small umbrellas and a jet ski or two – gave me the energy to wade through the Terry’s chocolate orange boxes and HBO box sets that litter my living room floor post-Christmas, look past the wind and drizzle outside my window, and head to Waterloo to meet Tom, for our last game of 2015.

Tom gleefully shows off his new camera bag, with enough compartments, pockets and waterproof sections, to ensure he will never be unprepared again going into the New Year.

Such is its Swiss Army knife qualities that the 30 minute or so trip to Staines station whistled by, making sure though not to make the same mistake as Tom had and nearly miss our stop, after his beer and Star Wars trilogy fuelled trip to Devon to see his family on Christmas eve.

“I’m here to use the gym” says the driver of the car pulling up, to a security guard apparently manning what we think is the entrance to the ground, he reassures us it is, and Tom is not wrong when he says “this is a bit swanky” as we walk the shrub lined drive.

At first it’s not clear where it is, there are no familiar sights, no towering flood lights, but there is a smell, a smell that my basset hound companion could lock onto anywhere, in any conditions – “the burger van is open”.

‘Welcome to Wheatsheaf Park’ is written high on a wall in blue on a yellow background, it would also seem from the sign just below that it is also the home of Chelsea FC Ladies team. We both exchange a look, but are both quick to remember we are here with neutral heads on, no Spurs or Arsenal allegiances tonight, it would also explain the slightly comical “ONE DI MATTEO” sticker at the station.

Once past the turnstile, paying the woman with her rolls of different coloured tickets hanging from the wall, it’s hard not to marvel at what is a pristine looking pitch. I’m guessing that having one of the top ladies football teams ground sharing with you, means a little bit more money is pumped into the pitch than at your average Ryman Premier League club, and it really looks like a cracking surface; in fact the whole setup from the outside at least, looks like one of the best we have seen.

Not long in and Tom is paying a visit to the portacabin Jenga which is the club shop, painted in the club’s colours, and with two very inviting homemade signs on the door “Football Manager sold here” and “grab some sweets”. However, it is neither of these that tempt Tom, but a new addition to the pin collection, to which the display of has become somewhat of a conundrum since the new camera bag, but he is happy it’s not “black and white and round” like so many of the others. 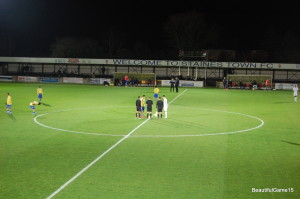 There is not a cloud in the sky, it’s cool and crisp and my shirt and jumper combination is already woefully inadequate. We pass a group of blazer wearing official looking types talking quietly amongst themselves at the mouth of the blue, vinyl extendable tunnel, as I find a seat in the empty main stand, as Tom goes off doing what he does.

It’s a short climb up some metal steps, to the blue seated stand, some of them bearing a sticker “Chelsea Ladies reserved” and I do my best to avoid them, I don’t want to get my jumper dirty. Wheatsheaf Park is simple, compact and immaculately lit, a small grey concrete fence encircles the whole pitch.

Opposite me, behind the two dugouts is a single storey covered terrace, which goes almost the full length of the pitch with “Welcome to Staines Town” written across the front, behind each goal is a small narrow strip for people to stand.

“You’re keen” says a man in a club tie clutching some programmes, making his way to the boardroom, situated high above the pitch behind large windows, at the very back of the stand. I wait like a doting wife at a steam engine convention, sitting in the front row watching Tom, as he does a lap of the ground, waiting for him to get on the home stretch so we can find the bar.

In order to get a programme, I drop into the club shop, shun the sweets, and hand over my £2.50, for the new bright yellow addition to my collection.

Through a door in the side of the main stand, the club’s crest painted on the wall at the foot of the stairs, we make our way to the Thames Suite. It feels almost like a wedding reception is about to begin.

Large round function tables, dim lights, and a pink glow from illuminated frosted glass behind the bar at the other end of the room, make me wonder when the disco is about to start, and it’s only when I notice the large projected screen, and various TVs showing football league highlights, I realise that unless it’s a ‘FL72’ themed wedding, there will be no Lady Gaga tonight.

As Tom visits the bar, I cast an eye over the various football shirts, QPR, Blackpool, Millwall, and one England rugby shirt that hang framed around the room.

As one man stands pumping pound coins into the single fruit machine next to the covered pool table up against the wall, Tom subtly finishes half a baguette that has emerged from one of the many sections of his new backpack. While chowing down, he peruses the programme every so often stopping, turning it my way, to share what he has found.

“Not a bad turn out” says Tom as the bar slowly fills up with big jackets and wooly hats. One of those people coming in, wearing the same blue and yellow scarf he had on when we first met him is Keith, who runs the club’s Twitter account and who kindly hooked us up with tickets for the game at Leyton Orient FC in the FA Cup 1st Round. He is also wearing the same big smile he had then too and kindly offers us a drink, after giving us both a big handshake.

Although not our first time seeing Staines play, it is our first visit to Wheatsheaf Park, and Keith is quick to fill us in. Things have not really been ideal since we last met at the beginning of November, Staines are currently on a five game losing streak, not that Farnborough are faring much better. He explains the team have been playing “good football” but have been “sucker punched” on more than one occasion.

I ask if the cup run has had a negative effect on league performance, an unnecessary distraction, but he does not think that’s the case, “We have been on good cup runs before”.

Keith explains a little more about the club’s set up, and that the owners are a large electrical company who do the flood lights at various clubs, including Chelsea and this explains the excellent flood lights we both commented on to each other when first arriving. Light quality is a bit of a bugbear, for Tom in particular when taking pictures at night games. Some grounds we have visited have little less than a torch tied to a broom handle, so tonight makes a pleasant change.

He also explains that during Sheffield United FC’s season long dalliance in the top flight, and with having to pay so many visits to London throughout the season, they purchased the facilities from Staines to use as a base, only to get relegated, as quickly as they got promoted, and ended up selling it back.

Mid-chat Keith points out a bit of a local hero, “that’s the girl who ran on the pitch at Leyton”. To say she “ran” I think is a bit of an understatement, she flew, I’m not sure her feet touched the ground. Going from the away end to the halfway line and back, before the stewards could blink an eye, and thanks to some fellow fans she was bundled off the pitch, and out the ground, before anyone could get their hands on her. “They say she has the foulest mouth going” explains Keith laughing, “if you get any quotes, make sure you spell them correctly”.

We are briefly interrupted, by the man selling 50/50 raffle tickets, Tom is already rolling his eyes, “mugs game” he tells me, but of course I hand over my £2.

Outside the crowd has increased, most of them milling around the tea bar and the club shop. Whilst in the bar Tom had popped off for a quick Vape, and on returning commented that the “wind is picking up” and it really was whirling around, making it feel even colder, perhaps its being so close to the River Thames, close enough Keith told us, that the ground flooded back in 2014. 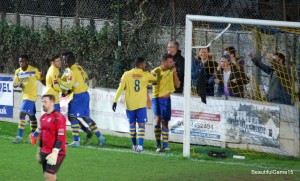 ‘Blue, blue, electric blue’ by Bowie is playing, as the players finish warming up, and the teams start making their way back into the shelter of the changing room. Tom once again comments on the amount of people here, “This could be one of our biggest turnouts”, although it should not be a big surprise, considering the turnout at Brisbane Road, they clearly have a solid fanbase, home and away.

“Welcome to Wheatsheaf Park, and this Crimbo limbo fixture” says the voice over the tannoy. He then goes on to give a brutally honest assessment of both teams league positions, not your usual fluffy, children’s TV presenter positivity, this guy only deals in hard facts.

Staines find themselves 18th and tonight’s opponents 21st, “both at the wrong end of the table” he explains, he also reminds everyone, although I’m sure it’s not entirely necessary of the fact that both teams were relegated from the Conference South last season. Not perhaps how I would go about rallying the troops, but maybe it’s a bit of reverse psychology.

As both teams are read out, there is another Chelsea reference, as the same entrance music they use, ‘Liquidator’ by Harry J Allstars starts to play, and a loud blast of the referee’s whistle, from down the blue tunnel, sparks the stewards into life..

The fact that the extendable tunnel does not quite meet the edge of the pitch, means one steward in a trilby,and one in a flat cap hold back the tide of fans, allowing for both teams to cross the small strip of concrete between tunnel and pitch unscathed. The Staines Town captain does his best to undo the work of the sombre club announcer and gets his team in the right frame of mind roaring “Come on boys!”.

Find out how the Swans got on in Part two on Back Page Football tomorrow.