No doubt that Bayer Leverkusen’s win at Borussia Dortmund wasn’t a fluke, they play well against their direct rivals pretty frequently. How they did it, though, might be an indication of what’s to come.

A good first step to doing well is to score after nine seconds and act like that was the plan all along. Clear enough for Karim Bellarabi at least.

Like Podolski against Ecuador or Makaay against Real Madrid, you don’t score within ten seconds without lots of pressure and it was that pressure that would characterise the Leverkusen performance at the Westfalenstadion. 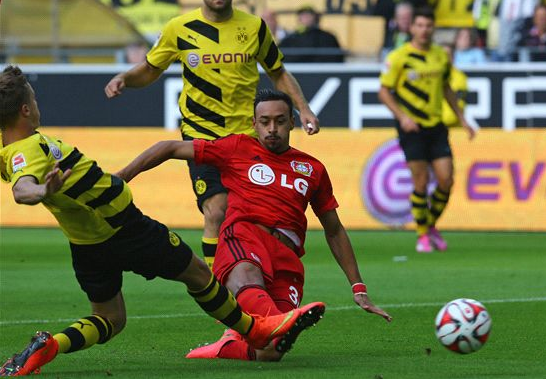 Since Klopp’s first title at Dortmund and the praise that has since followed for his work, what had no problem making it to the English-speaking world was the term “gegenpressing” to describe his style of pressure and attack. This style led to four consecutive Bundesliga titles, the first and fourth being Bayern’s titles in 2010 under Louis van Gaal and 2013 under Heynckes in 2013 because that team played very much the same football that Kloppo’s did the two seasons prior.

Last season was a break from that as Bayern’s massive possession and passing statistics saw them clinch the title in record time, no doubt though helped along by Dortmund’s perpetual injury crisis and Schalke being Schalke. And no matter those first two conditions, Bayern having a squad of players that no other team could come close to matching for quality.

Leverkusen didn’t have a particularly poor season, aside from their annual “Let’s embarrass all of Germany with our Round of 16 performance” party that they held in Paris and back home where they try to one-up Schalke’s party of the same name. So it depends how heavily you weigh European success I guess.

It was bad enough for a time, though, to cost Sami Hyypia his job in early April. This summer the Pills brought in Roger Schmidt who was fresh off of winning the Austrian Bundesliga by 18 points with RB Salzburg. Much like Bayern in Germany (and structurally similar to Leverkusen) RB have a massive financial advantage over their domestic competition because of their corporate backing.

Leverkusen played counterattacking football often last season and have for a few seasons, but Schmidt’s insistence upon high pressure at the risk of vulnerability is something that comparatively conservative and cautious Bayer teams have not done in the past. As stated earlier, a comparison with Van Gaal’s FC Bayern sides isn’t out of order here. With Heung-Min Son in to grab the goals that Sidney Sam presumably packed up and took to Gelsenkirchen, this Leverkusen team is as dangerous as ever going forward.

Add to that the quality of Hakan Calhanoglu who came with Son to the club from HSV, and Leverkusen look instantly stronger than they did last season. Evidently they’ve bought into Schmidt’s doctrine and are mostly on the same page tactically, like Klopp’s teams at Mainz and now Dortmund.

On Saturday, Schmidt’s team pressed relentlessly and it showed in the foul totals, Leverkusen committing 28 to Dortmund’s 13. Whenever Bayer lost the ball, it seemed, they would swarm the Dortmund players either with or near the ball.

In this instance, Leverkusen weren’t in possession but they had eight men in BVB’s half compared to only seven Dortmund players. The Dortmund and Bayern teams of the last half-decade who pressed rarely threw this many people at the ball, while ahead, against a rival in the table. And you can forget about them doing it away from home. 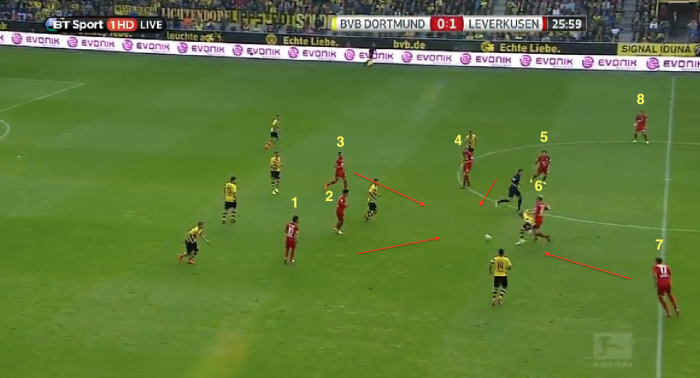 It was record time goal-scorer Bellarabi who most helped to finish Dortmund off in stoppage time, with an attacking third tackle on Erik Durm and slide-rule pass to Stefan Kießling who took his chance well to send it past Mitch Langerak.

Despite their all-out pressure, things never felt out of control for Leverkusen even though Dortmund had their fair share of chances. Right now, Schmidt can do no wrong. We’ll see what happens if and when his team concede a late goal, and if they can avoid doing that enough to seriously challenge Bayern, Dortmund and anyone else for the title come May.