Who would you want to be at the end of a through ball? Who are you more likely to rely on to provide the clinical, sometimes lethal, but ultimately composed finish? Whose shoulders are broad enough to carry the weight of expectation? Who can handle the responsibility of ten teammates’ efforts as they watch in hope? Your options are Fernando Torres, Didier Drogba and Wayne Rooney (the only three men in the league who score more often than John Terry). 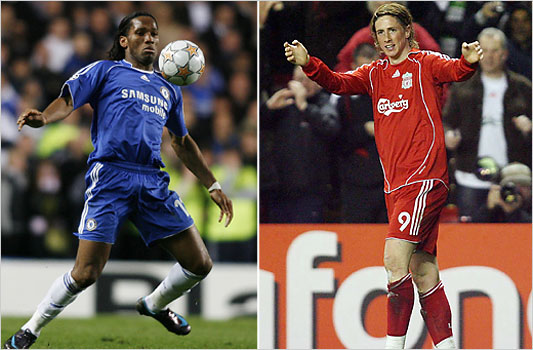 I’ll provide factual statistics (in protest against many sports journalists) so you can come to your own conclusion as to which man you’d rather have leading the line. Of course, I will have my own opinion on the matter but don’t let that have too big a bearing on yours.

I shall analyse in chronological order, starting with the youngest. England’s World Cup hopes, we are lead to believe, rest on the Merseyside born, 24 year old. Understandably so, when you look at his goal scoring record this season. The departure of the ‘winker’ has meant Rooney is now being played as a centre forward instead of an understudy winger. Interesting that Ferguson was at no point berated by the media (like other managers have been) for playing one of his better players out of ‘position’.

Rooney’s minutes per goal this season have been halved from the previous campaign. This term he has achieved a goal every 101.3 minutes. Quite an achievement considering he’s featured in almost 76.6% of available minutes. His total amount of assists shows the more forward thinking he’s brought to his game. 07/08 saw him supply 13 league goals whereas in 09/10 he has supplied only five. The fact he’s now Man Utd’s main goal threat has probably greatly contributed to the more selfish streak he’s developed.

Next in line we have El Niño, Liverpool’s number nine. Filling the shirt once carried by the great Ian Rush and one of England’s most natural finishers ever, Robbie Fowler, was never going to be an easy task, particularly for a foreigner. However, 26-year-old Fernando Torres has made that famous number his own ever since the day he slipped the ball past Chelsea’s Petr Cech on his home debut. This season has seen his best minutes per goal ratio since he graced these shores three years ago. His current 09/10 total is 94.7 minutes per goal, a slight improvement on Rooney’s. Although, this improvement should be taken with a pinch of salt as Torres has only featured in just under 50% of available minutes this season. His lack of game time has had a negative impact on Liverpool and partly explains the clubs less than impressive campaign.

Finally we have the final option to lead your attack, the unmistakable Ivorian, Didier Drogba. At 32 years old he’s the oldest of the three but has been very much a late bloomer. Enjoying his best season for minutes to goals, he’s also found himself supplying many assists. This campaign has seen him achieve a goal every 103.4 minutes, as well as providing 13 assists. Drogba has featured in just 77.9% of the available minutes, putting him on a similar level with Rooney regarding consistency over a pro-longed period of time.

Of course, for Rooney and Drogba to be as consistent as they have is a real achievement. Torres has been equally so in terms of minutes per goal (better in fact) but it’s easier to do so over a shorter period of time than a longer one. Although consideration must also be given to the fact that Torres has played in a team that is well below last season’s standards and it’s often harder to score when those behind you aren’t on top of their game.

Torres has taken to English football in his three seasons like a politician spending other people’s money. His minutes per goal in the league since he arrived are 106.6. Compare that to Rooney and Drogba’s best three season’s in England and they both require over half an hour more to score. Rooney’s is 141.6 minutes per goal with Drogba needing 132.4 minutes.

It should be noted that Torres’ goals have all come from open play, not one penalty or free-kick. Drogba has scored a few free-kicks, which I appreciate is not an easy opportunity but an extra opportunity nonetheless. Rooney has become Man Utd’s penalty taker after Ronaldo’s move to Real Madrid last summer.

Those are this season’s stats. Difficult to pick your favourite, all three candidates have experienced their best seasons in England for minutes per league goal respectively.

Each player has his own qualities, Torres for pace and directness, Drogba for power and strength and Rooney for commitment and determination. Despite these differences they all have one aim and one aim only, to find the back of the net as frequently as possible.

Out of the three you can argue Drogba has the least amount of leadership qualities. Due to his Oscar nominated theatrics he is often too focused on his own game to try to encourage and help others. Rooney is seen as England’s and Man Utd’s future captain and has experienced both at some point already. Torres was made captain very young at his first club, Atletico Madrid. He must have the qualities required to be a leader, although pundits and journalists from home and abroad have cited the inexistence of an armband at Liverpool as reasoning behind his outstanding development.

Being a Liverpool fan (you should know where my heart lies) I’d choose Torres. I appreciate the achievements and qualities of both Rooney and Drogba and I’m sure many would choose them. However, as an out-and-out goal scorer (regardless of how well the team is doing) then the baby faced Spaniard is the man I’d appoint to lead my attack.

Best three season’s in England– 141.6 mins per goal in Premiership

Best (only) three seasons – 106.6 mins per goal in Premiership