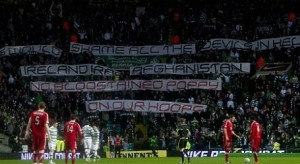 “It’s a grand old team to play for,” begins the famous theme song which has been heard at Celtic Park for more than 50 years; after the events of the past 10 days, few could argue otherwise. Where else could players lose home and away, going down 6-1 on aggregate, and still pick up a win bonus? It’s a grand old team bedad.

News this week that Legia Warsaw are prepared to take their challenge against UEFA’s decision to award Celtic victory in their Champions League third qualifying round tie all the way to the Court of Arbitration for Sport (CAS) is an interesting development for anybody interested in the political workings of football’s most powerful regional governing body.

Its decision to overturn Legia’s 2-0 victory in Edinburgh and instead award a 3-0 win to Celtic – fortuitously sending the Scottish champions through on away goals – has left a bitter taste in the mouths of many right-thinking football supporters, not least because the punishment seems so grossly disproportional to the ‘crime.’

Having done the difficult part – backing up a 4-1 win in Warsaw with an even more impressive 2-0 win at Murrayfield – Legia introduced substitute Bartosz Berezynski , a player they assumed had served the remaining two games of six-match suspension in the previous round against St Patrick’s Athletic, for the final three minutes of the second leg.

It was only after the final whistle – having begun to celebrate what they thought was undoubtedly one of the greatest results in the club’s history – that UEFA officials informed Legia that Berezynski hadn’t been registered in the 25-man squad for the previous round’s games with St Patrick’s Athletic, and as a result had not served his suspension.

The upshot was that Legia were deemed to be in breach of Article 21 of UEFA’s disciplinary code, which states that “a match is declared forfeit if a player who has been suspended following a disciplinary decision participates in a match,” for which the automatic course of action is to award the non-offending team with a 3-0 victory.

Celtic, for their part, maintained a diplomatic silence from the outset, commenting only after Legia published an open letter urging their opponents to enter talks, which most outsiders interpreted as a veiled attempt to persuade Celtic to agree to stage a one-off game to determine who progresses – a course of action the Glasgow club claimed they were “disappointed” by.

Celtic’s silence is to be expected. It is, after all, a business, and Champions League qualification has been worth upwards of £25 million per season to the club over the past two seasons – a huge amount of money in the context of the Scottish football league, which is struggling ever more from the rapidly-expanding chasm between it and the neighbouring English Premier League.

More pointedly, Celtic cannot take any position that would appear to legitimise or support Legia’s position in the matter, even if they were of a mind that Legia were the deserving winners. As Celtic is a public limited company, the board is compelled to act in the interests of its shareholders, and to act otherwise would have grave consequences – far more serious than any decision to play a suspended player in a dead-rubber qualifier.

While the majority of Celtic fans would be honest enough to admit that their side’s reprieve was anything but deserved – and that Legia were the deserved winners on the football pitch – there is nothing like a footballing row to make staunch legalists of even the most fair-minded football supporter. Nevertheless, the scale of the punishment meted out – the reversing of a comprehensive five-goal win – should trigger a pang of injustice in even the most pedantic scholar of the law.

While Legia may conceivably have gained an advantage having omitted Berezynski from the St Pat’s fixtures, that is of no consequence to the Celtic tie. There was no tangible benefit to Legia’s having fielded the player for the final three minutes of a tie their opponents needed six goals to win, and there is no plausible reason to believe they fielded the player in anything but good faith.

In that, Legia believe they have precedent on their side. In 2010, UEFA fined Debrecen €15,000 for fielding an ineligible player in a Europa League tie with Litex Lovech, declining to declare the match a forfeit as the Hungarian side had “no interest in fielding this player for the three last minutes of additional time, when the score was so clearly in its favour.” The parallels are obvious.

However, UEFA’s rules aren’t quite so clear-cut in this instance. The regulations are vague about what is to be done when a team fields an unregistered player, as was the case with Debrecen, and the organisation is empowered to merely levy a fine if they deem the offence to be of negligible consequence. However if the player in question is suspended, they have no option but to declare a walkover.

So Legia’s case against UEFA’s sanction appears to be doomed to failure – yet, that doesn’t tell the entire story, as long as one assumes that Legia’s sole aim isn’t just to be re-instated to the Champions League.

One thing that is for certain is that Legia will not compete in the Champions League this season. The draw for the final play-off round has been made and, as Legia were unseeded and Celtic were seeded, their re-instatement would require the entire draw to be made again. It’s too late in the day for that as the fixtures have been scheduled and arrangements have been made. Too much money has been spent to go back now.

What Legia do have on their side is the nuisance factor – they have the sympathy of many and, regardless of UEFA’s regulations, they may just have legal authority on their side too. UEFA’s regulations make a clear distinction between the punishment to be meted out to a club who, on the one hand, field an ineligible player as opposed to a club who field a suspended player, but they make no justification for why these two essentially identical offences are treated so differently.

The last thing UEFA wants is to be bogged down in a lengthy court case, particularly while the competition in question is ongoing, nor have Celtic any particular interest in attracting any additional publicity to their already dubious existence a competition they had been eliminated from on the pitch. It would be in the interests of everybody to ensure this case does not drag on.

And so the conversation resolves, as all conversations do, to John Delaney, and the Irish Sun’s recent revelations that the FAI was given €5 million of what was effectively ‘hush money’ from FIFA in order to put a stop to its protestations over France’s illicit victory over Ireland play-off for the 2010 World Cup finals.

While Sepp Blatter’s petty and distasteful public disclosure that Delaney had requested Ireland be included as a 33rd team at that year’s World Cup was embarrassing for all involved in Irish football, the net outcome was that the association gained a considerable windfall it wouldn’t have had it taken its medicine in silence.

The lesson for Legia is that, while they won’t now achieve their dream of a Champions League spot in 2014, there’s often much to be gained from making as much noise as you can on your way down.

4 thoughts on “Celtic row leaves a bad taste, but there may still be a sweetener for Legia”