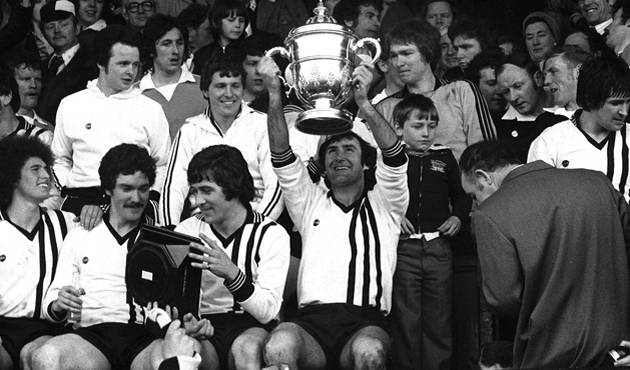 The death has taken place of former Republic of Ireland international Tommy McConville, who has died at the age of 67.

McConville, initially a forward, made his debut as a teenager for the club in 1964 and, after spells with Waterford, Shamrock Rovers, Bangor and then summers away playing in the NASL for clubs in Washington and New York, lined out for the Oriel Park outfit for the last time at the age of 40.

He won his first league title with Waterford in 1973, but apparently fell irrevocably out with the club after discovering that the board had turned down an offer for him from Manchester United, demanding a fee that deterred the English side.

McConville was synonymous with Dundalk and starred for the club over a 21-year period, making a record 580 appearances.It was back with Dundalk that he, and the local fans, enjoyed his best years, and the player was a key figure in teams that won three league titles, three FAI cups and many other honours.

He played in many of the club’s greatest ever European ties too and was forever being reminded about the last minute “miss” against Celtic that would have put the Scottish champions out of the European Cup and the Irish team into the quarter-finals: he invariably dealt with the subject with characteristic warmth and good humour.

“For Dundalk supporters Tommy ‘Mac’ was the best League of Ireland defender of his era,” says club historian Jim Murphy speaking to the Irish Times in tribute to him. “For many of them he has never been bettered. His hallmarks as a defender, whether at centre or wing-back, were astute reading of the game, intuitive anticipation, natural athleticism — brute force was not for Tommy — and thanks to his ball playing style and majestic elegance, he stood out wherever he played, whether in the League of Ireland or in the major stadiums of Europe, or North and South America.”

McConville also won six international caps for the Republic of Ireland between 1971 and 1973.