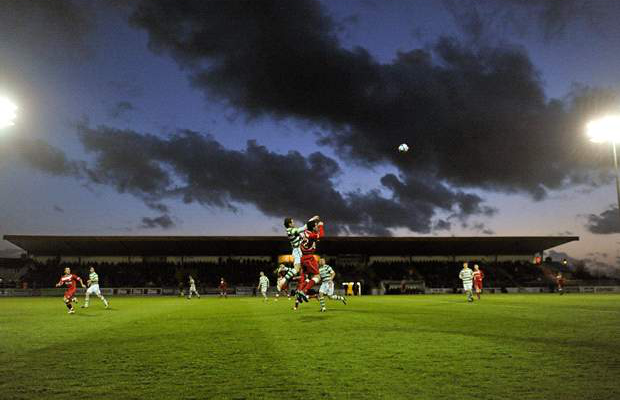 With St. Patrick’s Athletic having secured the Airtricity League Premier Division title two weekends ago, Dundalk claimed second place and condemned Bray Wanderers to the relegation/promotion play-off after a 2-0 win at the Carlisle Grounds.

Goals in each half from Patrick Hoban and Kurtis Byrne were enough for Stephen Kenny’s men to hold off Sligo Rovers who follow up their title winning 2012 season with a third place finish this time around.

The defeat leaves Bray second from bottom in the table and facing games on Monday and Friday night against Longford Town (runners up in the First Division) to preserve their Premier Division status.

Shamrock Rovers’ European dreams were quashed on the final night of a tepid season at Tallaght Stadium, after losing 2-1 to Sligo.

The Hoops needed to better Derry City’s result but the Candystripes recorded an easy win over Limerick, which meant the score at Tallaght was immaterial as the Hoops finished a disappointing fifth.

Shane Robinson had opened the scoring for Rovers in the just past the midway point of the first half before Aaron Greene hit back for Sligo five minutes later.

The Bit O’Red were still looking to secure second place in the league and Danny North was sprung off the bench with 30 minutes remaining and was on hand to grab the winner after latching on to a superb cross from Kieran Djilali. Sligo’s efforts weren’t enough to claim the runners up though spot following Dundalk’s win over Bray.

Declan O’Brien marked a fine individual display to give Drogheda United a 1-0 win, but it was all about Bohemians as they confirmed their Premier Division status despite this result.

O’Brien fired the first shot in anger, forcing Bohs keeper Dean Delaney into a fine save early on. But on the half-hour Delaney was given no chance as ‘Fabio’ latched onto a long clearance to fire home from 20 yards.

For a while Bohs lived nervously as relegation rivals Bray remained goal-less against Dundalk, and despite forcing a series of corners Micheal Schlingermann in Drogheda’s goal remained untested.

Conor Murphy missed a header from point-blank range on 87 minutes, just before Drogs sub Gavin Brennan fired against the post at the other end, but in the end Bohs were safe because of Bray’s defeat.

Shelbourne ended a miserable season with a 2-1 home defeat to UCD with the students securing their top flight status for a fifth successive season.

Shelbourne had been relegated before this final game but UCD needed a win to ensure that they would avoid a relegation/promotion play-off.

Robbie Benson capped a fine individual display to score for the fourth match running with a penalty on 18 minutes, before Ian Ryan equalised for Shels a minute later.

However, the tie was decided by a Dean Clarke strike for the Students just two minutes later.

Bray’s defeat to Dundalk meant that UCD didn’t need to win but Martin Russell’s side still produced the performance they needed to record a first win in eight games and achieve their goal themselves.

The visitors were welcomed onto the pitch by a guard of honour from the home side, but the goodwill extended no further in the first half as City rampaged their way to a 3-0 lead at half-time through goals from Gearóid Morrissey, Daryl Horgan and Ciarán Kilduff. Morrissey grabbed his second late on.

St Pat’s showed their pride in a game where little was at stake for either side when they began the second half with real purpose and Chris Forrester scored an excellent goal. Manager Liam Buckley made three substitutions by the 55th minute and switched to 4-4-2.

Ger O’Brien scored with a super long-range strike but Pat’s could not gain parity.

For Cork referee Alan Kelly, the game was memorable for being his last domestic fixture for a while as he heads off to officiate in Major League Soccer in the US soon.