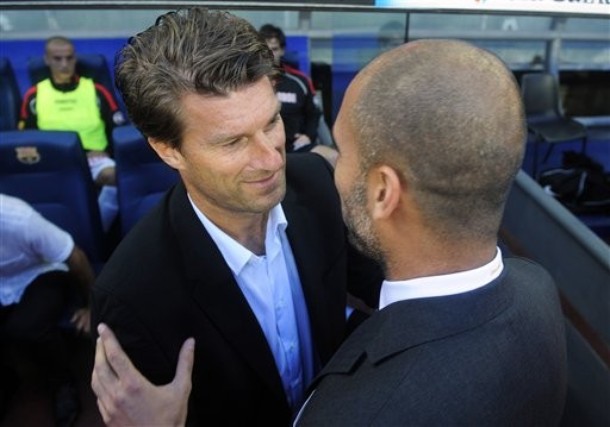 The appointment will not come from leftfield.

For all the talk of Johan Cruyff somehow burying the hatchet with Sandro Rosell or Marcelo Bielsa coming out of his very own sabbatical, it seems incredibly unlikely that Andoni Zubizaretta will shock the football world when Barcelona’s new manager is announced in the coming days.

After all, the past seven days have been disconcerting enough.

First, there was the revelation that Josep Guardiola never visited Tito Vilanova during the two months he was receiving treatment in New York.

The result was a bitter blame game, with barbed comments swapped from Munich and Barcelona simultaneously.

Given how Barcelona were to play Bayern Munich in a friendly just a week later – and were certain to challenge Bayern for the Champions League in 2013-2014 – it promised an intriguing few months.

Then, the events of 19 July transpired and football was put into perspective.

It truly is astonishing: three times in 20 months, Vilanova has had to cope with aggressive treatment for parotid gland cancer of the throat.

Sure upon his return in March, 2013, the Catalan looked gaunt and pale but the fact that he, seemingly, beat the illness for the second time suggested 2013-2014 would offer some much needed stability.

The words resignation and stress never came into it.

After all, Vilanova was keen to prove a point to the football world after criticism both for his bedside command of training from New York and Barca’s 7-0 trouncing in the Champions League semi-finals by Bayern.

The fact he has now resigned suggests Vilanova’s time in the pressure cooker of football management is over and with it, Barcelona’s hopes of channelling Liverpool’s boot room of Bill Shankley, Bob Paisley and Joe Fagan in the ’60s, ‘70s and ‘80s.

Even if Barcelona are again bold – as they were in appointing Guardiola in 2008 – it seems incredibly unlikely Rudi or Jordi Roura could take the team forward, a point that would be reinforced if you bet on sports at williamhill.

An outsider of sorts will have to be turned to; Barcelona will, probably, make their first managerial ‘poach’ since Sir Bobby Robson from Porto in 1996.

After all, Barcelona’s recent history has centered on their incoming managers either being out of contract, joining from an international team, being in house, or being out of work.

With André Villas-Boas having ruled himself out and Roberto Mancini and Jupp Heynckes unlikely to click with the Barça model, attention will surely turn to Paraguay’s Gerardo Martino and Swansea’s Michael Laudrup.

The Dane may well have signed a new contract that keeps him at the Liberty Stadium until 2015, but his reign has been dogged by murmurs.

Firstly, there was a supposed dressing-room revolt over his training methods; then, there was speculation that Laudrup may leave Swansea over a lack of backing in the transfer market.

Of course, both have, ultimately, been proved false: Laudrup’s Swansea were one of the most in-sync, motivated and cohesive units in the Premier League last season and Laudrup has already spent over £20 million this summer in aiming to take Swansea to the next level in Europe.

Yet, the rumours that all is not what it seems at the Liberty Stadium have continued to linger.

Also, this truly is a once in a lifetime opportunity for Laudrup, with the Dane’s stock in management at an all-time high.

After all, Laudrup has established himself as one of world football’s great philosophers, with his progressive elevation of Roberto Martínez, Paulo Sousa and Brendan Rodgers’ foundations at Swansea.

Then there is the small matter of Barcelona’s fans holding one thing against Cruyff: he left Laudrup out of his squad for the 4-0 humbling against Milan in the 1994 European Cup final and sold Laudrup to Madrid just months later.

There was another man who never looked at Cruyff the same after that decision: Guardiola, who was left in tears when he learnt of Laudrup’s departure.

Many at Swansea would have the same reaction if Laudrup was to leave, but the Dane’s appointment of Morten Wieghorst as his assistant on 7 February reflects the fact that Laudrup is already readying a sustainable legacy once he leaves the club.

After all, Wieghorst believes in the same philosophy and has the abilities, in Laudrup’s eyes, to manage Swansea.

As a result, Laudrup’s influence is sure to remain in spirit at Swansea when he eventually departs and Wieghorst’s potential will strike a chord with Huw Jenkins, Swansea’s chairman, who was fixated by the romantic idea of bringing former assistant Graeme Jones back to the club as manager last summer.

Also, in truth, Laudrup may have taken Swansea as far as he can – given the incoming difficulty of two-game weeks – and winning the first managerial trophy of his career with the Swans may have been the perfect climax.

Thus, an offer from Barcelona will be the ultimate test of Laudrup’s loyalty and the ambitious Dane may never have a greater chance to manage the Catalan giants.