Fantasy football isn’t always a good way to judge a player’s performances but Landon Donovan’s efforts to hit double points in each of his last five games is an indicator of how important he still is to the LA Galaxy.

The 32-year-old, who last month announced that he will be retiring at the end of the current campaign, has bagged five goals and seven assists in that run of five successive victories and picked up the league’s Player of the Month award for August.

He was on fire against the Colorado Rapids in LA’s most recent outing, scoring twice and setting up two more goals in the resounding 6-0 victory. 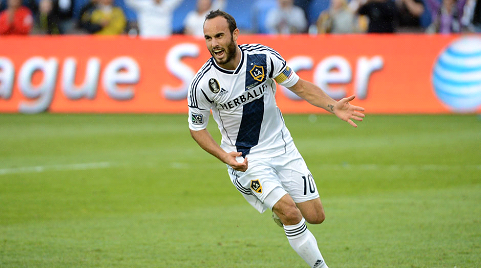 Donovan currently leads the league in assists with 14 to his name and is now just six shy of Steve Ralston’s Major League Soccer record of 135.

Already MLS’ all-time top goal scorer with 143 to his name, Donovan has been a driving force in the Galaxy’s rise to second spot in the Eastern Conference, two points behind the division-leading Seattle Sounders.

However, he has just eight regular season games left following his decision to hang up the boots after 15 years as a professional.

“After careful deliberation and many conversations with those closest to me, I have decided that this will be my last year as a professional soccer player,” said Donovan in August.

“It has been more than anything I could have dreamed of to represent the LA Galaxy, the San Jose Earthquakes, Everton, U.S. Soccer and Major League Soccer throughout my career.”

Donovan took a three-month sabbatical from the game at the end of 2012, a move that impacted his international career but rejuvenated him at club level. Despite his controversial absence from Jurgen Klinsmann’s World Cup squad this summer, Donovan has continued to perform well with the Galaxy, and he was voted the Most Valuable Player as the MLS All Stars beat German giants Bayern Munich at the beginning of last month in Portland.

Donovan has 156 international caps to his name and sits way out in front on the lists for most goals (57) and assists (58). Clint Dempsey is next in line with 39 goals and you have to go all the way down to Jozy Altidore on 23 to find another currently active player.

Supporters will get to see Donovan don the white jersey once more following news a fortnight ago that he will get a proper farewell on home soil in the friendly against Ecuador in October at Rentschler Field, Connecticut, on October 10th.

“Playing for the US National Team has been a huge part of my career and I’m ecstatic to have the opportunity to play for my country one last time,” he said.

“I’m so grateful to all the fans that have supported me and this game will give me the chance to say thank you to all of them.

“I look forward to a great evening and I’m thankful to US Soccer for making this happen.”

The curtain may be about to fall on the career of America’s greatest ever football player but one can’t help but feel that, in light of his recent performances, the move is coming at least a season too soon.