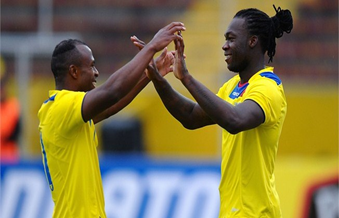 On 29th July the footballing world was rocked by the news of the passing of Ecuadorian powerhouse striker Christian “Chucho” Benitez.

As the world mourns, much sadness will be felt in Quito and throughout Ecuador as the country tries to come to terms with the loss of their third all-time top goal scorer at the tragically young age of 27 years old.

Benitez’s death comes at a time where Ecuadorian football is at its most fertile and it is vital that they use this tragedy as motivation to succeed in qualifying for the 2014 World Cup in Brazil as tribute to their fallen striker.

Leading the line with fellow striker Felipe Caicedo, Benitez and Caicedo’s goals have fired Ecuador into third place in CONMEBOL’s qualification group after 12 of their 16 games, sitting higher in the table than South American footballing powers Uruguay, Paraguay and Chile.

This has come as Benitez has been in a great vein of goal scoring form after winning the Mexican Clausura with Club América, he ended the season as top goal scorer in both the Apertura and Clausura tournaments scoring 23 league goals.

After securing a 1-1 draw at home to qualification leaders Argentina on 11th July, it is looking increasingly likely that this newly rejuvenated Ecuador team would be heading to their first World Cup since their Round of 16 defeat to England at the 2006 World Cup.

Being one of only a few of the current players that was part of that 2006 squad, Christian Benitez was an essential part of this Ecuador team that is looking stronger than ever with an essential mix of international experience and youthful exuberance.

Alongside veterans such as Antonio Valencia, Segundo Castillo (both of whom were also included in the 2006 World Cup squad) and captain Walter Ayoví, Benitez was a guiding force that was bringing back the glory to Ecuadorian football having embarrassingly only collected one point and finishing bottom of their Copa America group in 2011.

This improvement in such a short space of time since 2011 is testament to the rise of the Ecuadorian nation team a footballing force, to which Benitez was an integral component. Naturally a huge hole in the team will be felt by all when the team take to the field for their next World Cup qualifier on 6th September as they face Colombia away in Barranquilla.

After such a tragedy for all involved in Ecuadorian football a good result in a game that has the magnitude of the Colombia game is a must for the Ecuadorian qualification battle. A win in the pivotal Colombia game could provide La Tri with a point difference of up to eight points from the fifth place play-off position that is currently held by Uruguay and could all but guarantee Ecuador a spot in Brazil in 2014.

However, with games to come against Chile and Uruguay, who occupy the positions in the table immediately below Ecuador, slipping up could have disastrous consequences and Ecuador could slip out of the World Cup qualification places completely and the efforts of the late Christian Benitez and the Ecuador team could all have gone to waste.

So in this tragic yet pivotal moment for Ecuadorian football, the Ecuadorian national team must use the raw emotions of the sudden death of their goal scoring figurehead to propel their team to the greatest stage in world football and honour Christian Benitez.