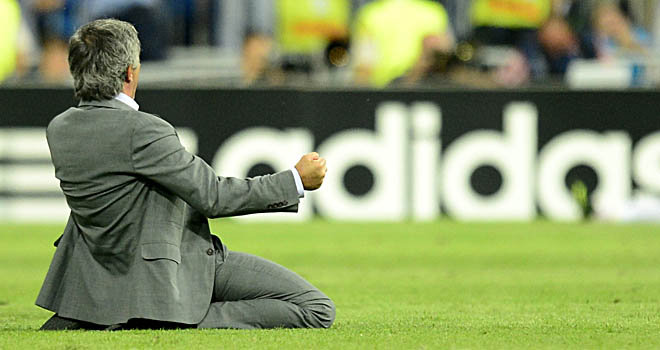 Of all of the images that stood out in Real Madrid’s exhilarating 3-2 victory over Manchester City on 18 September, there was a slightly mundane, but incredibly telling, moment after Manchester City went 2-1 up through Aleksandar Kolarov on 85’.

It had seemed – with Mourinho’s “DNA” playing a huge role in Madrid initially not losing their belief – after Marcelo’s equaliser on 76’ that Madrid would go on to claim all three points without again going behind or would, at the very least, achieve a solid point using Mourinho’s trademark neutral tactics in Europe. However, while the Madristas continued to roar after City went 0-1 up on 70’, there was rare, earth-shattering silence within the Bernabéu when City went 2-1 up on 85’.

It seemed, with Madrid having gone somewhat gung-ho in search of an equaliser – with City happy to play on the swift counter after Marcelo’s equaliser – that the carefully harnessed wheels of Mourinho’s philosophy and near-flawless puppetry of big European nights were about to fall off and a shift in the European pantheon was in the offing. Sure, it could be said that this was merely a group game, where neither team has yet hit their optimum, but there were haunting similarities between that silence after Kolorav’s goal and a similarly deafening (augmented by a 24,973 attendance) mute that greeted Mourinho’s Chelsea upon going behind to Rosenborg in a 1-1 draw on 18 September, 2007.

Both sides were in poor form, with Chelsea having claimed just four points from a possible nine in their three previous league games and Madrid taking only three from a potential nine; both teams had, uncharacteristically, toothless attacks, with Chelsea only scoring one goal in Mourinho’s final three league games and Madrid netting just one in the three league games before the City match; and, most importantly, on both occasions, Mourinho was entering a crucial phase in a potential long-term stay.

After all, Mourinho is a keen advocator of Béla Guttmann’s three-year rule, whereby coaches should never leave before their three years are up – as it is near-impossible to complete all objectives in this time – but should never stay on after this period as players and staff get complacent. This is why Mourinho referred to staying on at Chelsea for the beginning of 2007/2008 as “the biggest regret of his career”, despite the symbiotic bond he held, and still holds, with the club.

Mourinho knew, having had three excruciating (Liverpool’s ‘ghost goal’ in 2004/2005, Asier del Horno’s seemingly harsh double-booking in 2005/2006 and a penalty defeat to Liverpool in 2006/2007) cracks at securing Chelsea’s first ever Champions League trophy, that – accentuated by Roman Abramovich’s wish for a more attractive playing style without the necessary expenditure and John Terry’s flagging relationship with Mourinho – the conditions were not in place for the situation to improve. From this, the once-cynically interpreted “mutual termination” was actually very amicable, reflected in Abramovich purchasing Mourinho a rare £2 million 612 Scaglietti Ferrari just days after their parting. Admittedly, there was nothing to suggest that if Madrid had lost the game, Mourinho would have departed, but the once-dormant managerial unrest for Madrid under Florentino Pérez has always threatened to boil over during Mourinho’s twenty-seven month tenure.

After all, Mourinho’s time at Madrid has been far from straightforward: the legendary, and influential, Alfredo Di Stéfano’s “lion” and “mouse” highlighting of Madrid completing just 179 passes compared to Barcelona’s 740 in the 1-1 draw in La Liga at the Bernabéu on 17 April, 2011; the Iberian divide, near-cemented after Sergio Ramos and Iker Casillas’ fall-out with Mourinho in training during the post-mortem of the 2-3 Copa del Rey first-leg defeat to Barcelona on 18 January, 2012; Mourinho’s unethical hankering for a move ‘home’ to England in an interview with the BBC during the Christmas break of 2011/2012, just months after absurdly, and unsportingly, eye-gouging Tito Villanova; and, of course, Cristiano Ronaldo’s unhappiness, with rumours of Mourinho’s stern treatment of Kaká and refusal to publicly back Ronaldo’s hunt for the Ballon d’Or (a la with Zlatan Ibrahimović in 2008/2009) continuing to rumble.

This is why – in such a rare move in group games (similar celebrations greeted Chelsea’s 2-2 Group A draw with Barcelona on 31 October, 2006, but the tone of tie was set by Mourinho-driven, pre-match vitriol) – Mourinho rejoiced and skidded across the Bernabéu’s sacred turf in his Armani slacks, retaining his flawless record of never having lost a Champions League group opener. Coming just three nights after the grizzled, battle-worn Portuguese declared that he “had no team”, Mourinho’s players gave him the perfect retort: not just battling back and settling for a draw, twice, but then seizing momentum and securing all three points. So, to suggest Madrid’s poor start to the season was owed to Mourinho’s traditionally average (still, two wins, one draw and three losses before the City game is Mourinho’s worst ever start to a full season) starts to the season or player fatigue from Euro 2012 would be foolhardy.

Rather, with Josep Guardiola’s resignation – who Mourinho hounded so incessantly – an undeniable complacency has gripped Madrid and the Catalan’s departure, unsurprisingly, coincided with Madrid celebrating their first title for four seasons in record-breaking fashion. Mourinho outlasted (the Portuguese will have overseen an El Clásico, on average, once every two months by 7 October 2012) Guardiola – going all the way back to Internazionale’s epic Champions League semi-final 3-2 aggregate victory in April, 2010 – so the Portuguese, seemingly, had the external conditions in place to finally lay the basis for a globetrotting dynasty.

It will be intriguing to see how Mourinho’s duel with Villanova pans out, but – perhaps just as important as footballing results in leaving a legacy- with the backing of Pérez, José Angel Sánchez, and Zinedine Zidane, Mourinho, internally, is elevating his influence to Academy and medical department matters at Madrid. From this, Mourinho has personally met Michel Bruynickx, Standard Liege’s academy director, among other leading European academy trailblazers, to devise the best way forward for Castilla; has utilised the precocious 19 year old striker, Álvaro Morata, at times in 2012/2013; and hopes to leave a Milan Lab-like legacy, with close co-operation with Sanitas La Moraleja Hospital. This is a marked contrast to how things panned out at Chelsea between 2006 and 2007, with Mourinho’s influence growing rather than receding at Madrid. So, given that many have criticised the Portuguese’s nomadic tendencies in the past, it is clear that he intends to build a legacy at Madrid.

Thus, with the squad’s young average age – reflected in the Galácticos’ era Madristas (those fans who matured in the late 1990s and early 2000s) being his most fervent supporters – Mourinho could, perhaps, enjoy the most influential and ground-breaking spell of his thirteen-year managerial career. This may seem a remarkable statement today – given the irreplaceable impact Mourinho had on the philosophies and histories of Porto, Chelsea and Internazionale, and the currently dormant, cut-throat uncertainty of life at Real Madrid – but, come 2015/2016, who is to stay that Mourinho will still not be coaching names such as Raphaël Varane, Marcelo, Sami Khedira, Mesut Özil, Ángel di María and Karim Benzema into their peak years?

That, though, will depend on how soon Mourinho joins Bob Paisley as the only man to win three European Cups as Madrid – somewhat embarrassingly in the grand scheme of things, having won a European Cup, on average, just over every five years between 1956 and 2001 – have reached just three semi-finals in the past eleven seasons. Still, despite the pressure of an Abramovich-like obsession on Pérez’s part (Mourinho thrived as a relative underdog of sorts with Porto in 2003/2004 and Internazionale in 2009/2010), if successful, Mourinho can not only lay claim to being the only manager to win the European Cup with three different teams, but, finally, cement his legacy as Real Madrid’s first foreign managerial trailblazer.