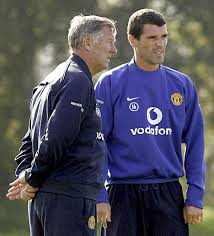 The main source of Sir Alex Ferguson’s ire in his new autobiography is one Roy Maurice Keane.

Wayne Rooney, David Beckham and Rafael Benitez, amongst others are also targeted but it is the Cork man who is dealt the brunt of the Scot’s infamous “hairdryer” treatment.

Ferguson starts the chapter dedicated to the bashing of Keane with some praise for the now 42 year-old, in highlighting his ability as a box-to-box midfielder.

Ferguson, though, detected a change in Keane’s behaviour as his football abilities waned, following hip and knee surgery. “He thought he was Peter Pan,’’ Ferguson writes. “Nobody is.’’

Ferguson also details the background to the breakdown in his relationship with Keane. Ferguson said that as Keane began to lose his ability, he tried to change his game but Keane wasn’t having any of it.

“The hardest past of Roy’s body is his tongue,” he wrote. “It was frightening to watch. And I’m from Glasgow.”

Ferguson also describes Keane in the book as being an “intimidating and ferocious” individual.

He says that serious tensions had emerged in pre-season training ahead of the 2005-’06 season in Portugal when Keane was critical of the accommodation that had been arranged.

Ferguson felt there was nothing wrong with the facility and says that Keane “erupted” when they discussed the subject. He says that Keane then accused him of changing and that the Cork man became “reclusive”.

The final breakdown in the relationship between the pair occurred a few months later when Keane accused him of bringing his private life into the club over the Rock of Gibraltor racehorse.

The argument occurred in front of the other Manchester United players and coaching staff after the squad had gathered to collectively watch Keane’s infamous 2005 MUTV interview about his team-mates.

In the words of Ferguson, Keane had verbally “slaughtered” all of his team-mates in the interview and then suggested that the players gather to watch it.

The meeting ended with Keane asking the players if they had anything to say and him rounding on Ruud van Nistelrooy, Edwin van der Saar and assistant manager Carlos Quieroz. Ferguson graphically describes the anger in Keane’s face during that confrontation in his autobiography.

Ferguson described what Keane had done on MUTV as a “disgrace” and accuses him of “assuming managerial responsibilities”.

An immediate decision was made by the manager that Keane must be sacked by the club, with the Glazer family backing Ferguson’s judgment.

Since then there has been something of a cooling of hostility between Keane and Ferguson – with a number of notable exceptions including in 2008 when the club were on the brink of taking Keane to court following extremely critical comments directed by Keane towards Ferguson.

The revelations from this new book show that the pair clearly remain far from friends.

See Keane’s reaction to the comments below