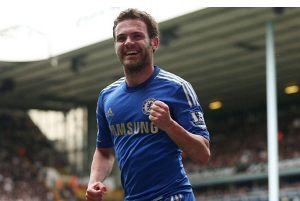 When the news initially broke that Manchester United were looking into the possibility of securing the services of Juan Mata this January transfer window, I didn’t really think much of it. I mean, surely Chelsea wouldn’t sell him to another English club? Especially not the same club who have refused time and time again to allow Wayne Rooney to move in the opposite direction.

A few days later and the move looks not only possible, but likely. If you pay attention to pretty much any football news channel, or newspaper that is.

It’s no secret that Mata has been struggling for game time this season, he’s clearly not one of Mourinho’s favourite players – that much is true. But, on the other hand, we’re not talking about just any squad player here. The man at the focus of this article is a player who, in two years at Stamford Bridge has won club Player of the Year twice. A player who the fans worship and has even found himself even being compared Gianfranco Zola – the official greatest ever player to play for Chelsea Football Club.

This is a deal that makes sense for two of the three parties involved.

Does it make sense for Manchester United? Of course, they need a world class talent of Mata’s profile to help them push back into the top four. David Moyes needs to shake off the criticism he’s come under from certain areas of the media. The current champions have found themselves becoming somewhat of a laughing stock within the football world. They have been reduced from being a seemingly untouchable force in the Premier League to becoming a completely average top half side. Teams sense a weakness now, Manchester United are fallible. Smaller clubs go to Old Trafford and smell blood, they know they can beat a side that previously would have had them trembling with the very idea of facing.

Does it make sense for Juan Mata? Absolutely. He needs to find himself starting football matches again. He’s simply too good to find himself sat on the bench week in, week out. There is a World Cup only a matter of months away and even when playing Mata finds it near impossible to make it into the starting 11 for Spain. The last thing he needs is to be sitting on the bench while the likes of David Silva, and even Jesus Navas are playing for Manchester City, increasing their chances of selection ahead of the Chelsea man.

Does it make sense for Chelsea? Here’s where the confusion arises for me. No mater what way I look at this I fail to comprehend how on earth this move would be beneficial to José Mourinho and his title ambitions. People have put forward the argument that Manchester United still have to play both of Chelsea’s title rivals. If that is the reason Chelsea are looking to offload him, why not do it on a loan basis?

What happens next season? If United have Mata, maybe Robin van Persie and Wayne Rooney are back in the side and firing again. Adnan Januzaj has a better squad around him to allow him to thrive, as well as having more experience. Carrick and Fletcher form a partnership in the middle. Maybe they sign a few defenders. Suddenly United are title contenders again, and Chelsea have given them one of their key players.

Okay so at the moment he’s not a first choice player, but what happens if Willian, Oscar or Hazard get injured? Schürrle comes in. But what if another gets injured? Ramires pushes forward? There is no two ways about it, Chelsea would be a lot weaker should they let Juan Mata leave.

Injuries aside, there is still a purpose for Mata in this Chelsea side. They still find themselves competing on three fronts; the Premier League, the Champions League and the FA Cup. They will be playing two games a week for the remainder of the season and squad rotation is inevitable.

So to just summarise things, the one party this deal does not benefit is the party that controls the whole situation. It is a story that I simply cannot wrap my head around.

The deal is not yet confirmed by any stretch of the imagination, but it is being widely reported that Manchester United have made an official bid and I find it hard to believe that they would do so if they didn’t have a fairly good idea that the move would take place.

4 thoughts on “Juan Mata: The difference between Europe and mediocrity”